The leader of the Highlanders is enjoying a final year of playing under his dad, a Floyd Central assistant coach. 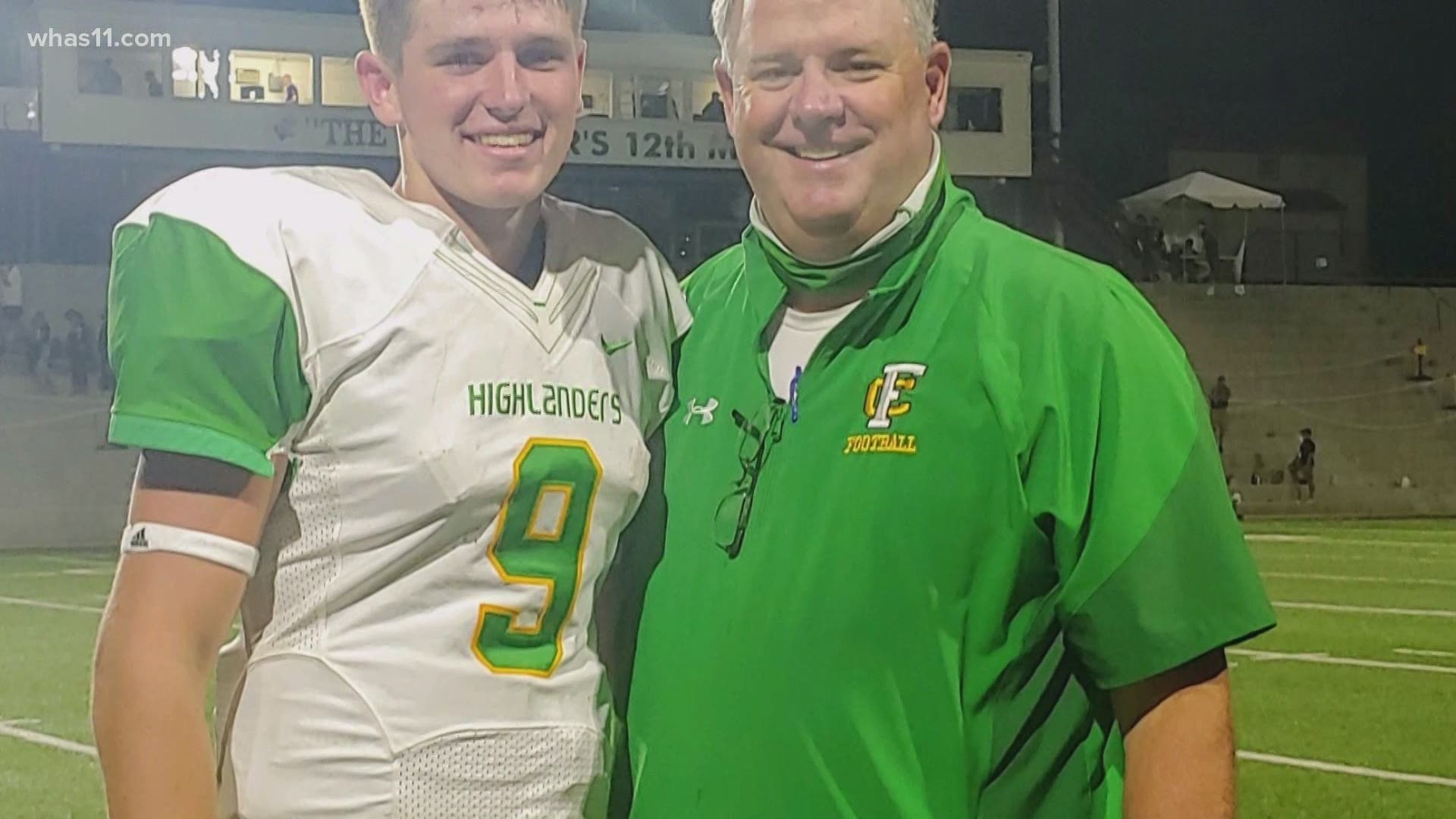 FLOYDS KNOBS, Ind. — Floyd Central High School quarterback Tristan Polk has been around football for his whole life. It's readily clear at his family's house.

"There's a picture on our mantle of me in the headset of my dad," Polk said. "I've always been around the game for a long time. It's opened my eyes to what high school sports was at an early age."

And it foreshadowed what his experience in them would be like. The senior Highlander now plays under his father Jamie Polk, who's an assistant coach at Floyd Central. That's something the elder Polk wasn't too sure about at first.

"Actually, I never wanted to coach my kid," Polk said. "But a very good friend of mine whom I've coached baseball with for years always said, 'You know, you should always coach your kid if you get a chance.'"

He ended up doing it throughout Tristan's childhood in baseball and football. But Jamie coming back over to Floyd Central when Tristan was in seventh grade after spending some time at North Harrison set up an invaluable experience down the line: coaching his son as he became the starting quarterback for a contender in the Highlanders.

What he's come to realize is, even after 20-plus years of coaching: It's more difficult than he thought.

"It's very hard," Jamie Polk said. "Maybe everybody else can do it better than I can."

Where that comes out the most is when the two are watching film together at home or working through kinks at practice.

"I tell you the hardest part is when all week, he misses a read, or he does something you've seen him do on Monday, Tuesday and Wednesday," Jamie Polk said. "And on Friday, he does it again and I can't keep my mouth shut."

"I'm already irritating at myself and then he'll be like, 'Hey, what are you doing,'" Tristan Polk said. "'Why are you making that? What was that read?' We don't say anything past that."

"We pick on each other a lot, in a good way. We have that relationship. I'm happy about it. He'll come over and be like, 'Hey, that was a great practice. You had like three picks in three plays. That was awesome.' And when he's on defense, I'd be like, 'Hey, man, three touchdowns in three plays. I guess your defense wasn't doing too good today.' You know, something like that. We love to give each other crap and I think that's made our bond closer."

The signal caller said he knows it's all just to make him better. And it's that fiery competitiveness that's always showing up, even at the house.

That's pretty similar to what dad experiences while trying to also coach on a Friday night when his son is trying to lead the team to a win.

"I'll catch myself every so often just coaching and not watching," Jamie Polk said. "Senior year, I've tried to make a point that, hey, just watch a couple plays and just experience them as a dad versus a coach."

And ultimately, even through staying on his son to help him improve, Jamie said his major takeaway has come from not doing anything.

"The biggest thing I've learned is to let him fail even more," Jamie Polk said.

It's worked out well so far. Polk is the vital leader of a 7-2 Highlander team that looks ready to try and make a deep playoff run. But as this duo enjoys the wins, it's savoring the little moments of this lasting father-son experience more.

"It was the greatest feeling in the world to throw a touchdown or run a touchdown and have fun with your coaches obviously," Tristan Polk said. "Then, you get to high-five your dad."