Louisville's Henry Davis could be first Cardinal taken No. 1 in MLB Draft

The star catcher is regarded as one of the best baseball prospects in the country. 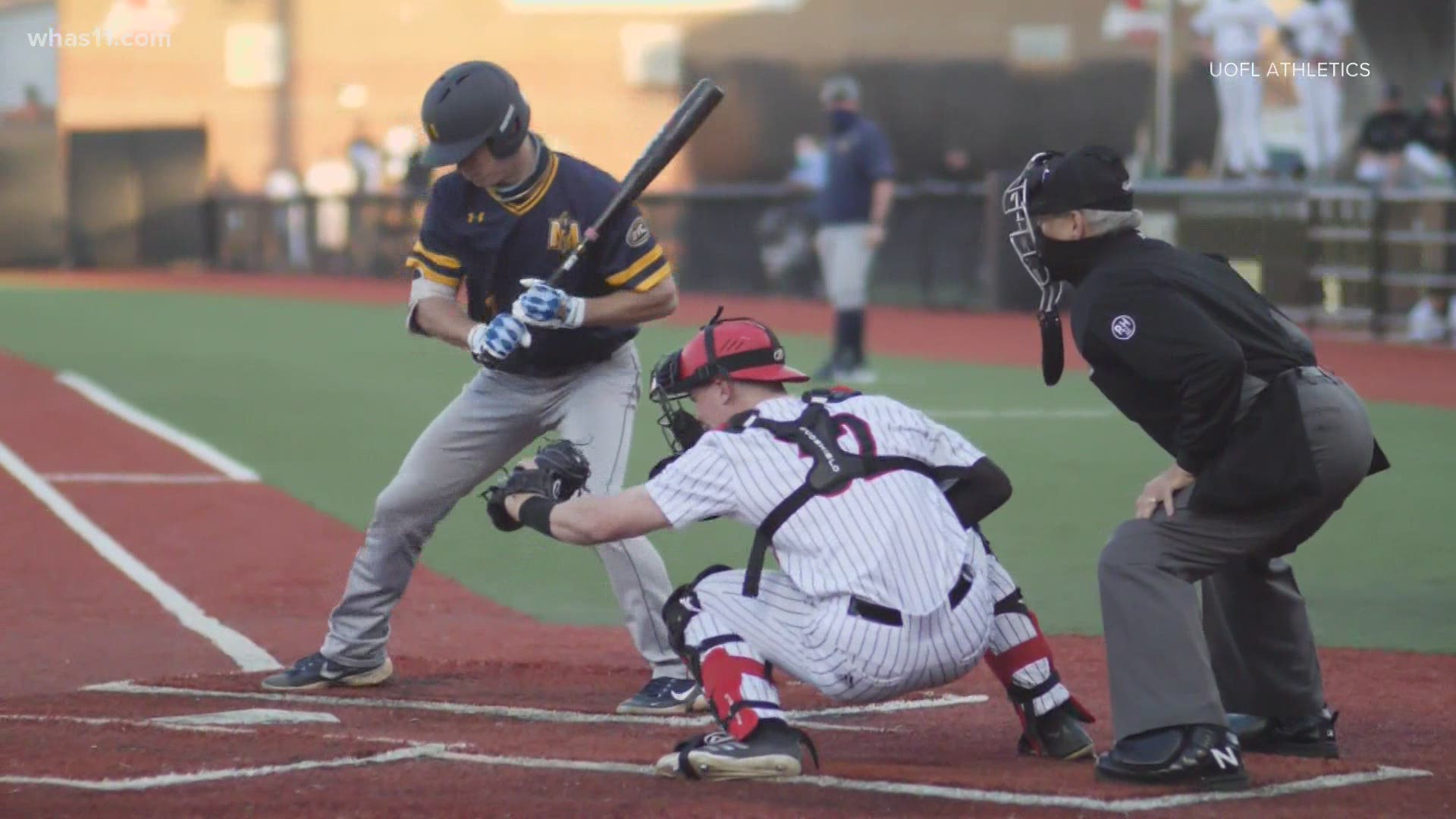 LOUISVILLE, Ky. — Louisville catcher Henry Davis lives with five of his Cardinal teammates. In a program that doesn't shy away from high expectations, they write their goals down on a whiteboard.

Davis takes it a step further: He has his aspirations written on his mirror and door. Two years ago, he wrote three things.

The first two have never been accomplished at Louisville. But the sophomore could become the first Cardinal to ever be the top pick in the Major League Baseball Draft. He's regarded as one of the best prospects in the game.

"I've kind of taken the stance from the start of the season to just kind of put the blinders up and stay focused on what's real," Davis said. "I never really put a big emphasis on rankings, whether that's draft rankings, top 25 or preseason. I feel like none of that really matters. It doesn't help anybody win games. And I mean, that's our main focus as a team."

It's that kind of focus that's come to define Davis. He wasn't a highly-touted high school prospect before coming to Louisville. But the New York native impressed Louisville head coach Dan McDonnell with his desire to play in a program of UofL's caliber.

"He was a talented kid coming out of high school, had the plus arm and some good defensive skills," McDonnell said. "I think probably his best quality was that he competed. The swing wasn't great. It was a work in progress. He was just a little raw. But he was good enough to play as a freshman, which is not always easy to do in our program on a team that finished third in the country."

"I remember just being in class in high school and thinking, 'Okay, in 10 minutes, I'll have five minutes left in class," Davis said. "And you're not present. I think just being present is the biggest thing that came with maturity."

It's something he showed quickly to McDonnell and the rest of the Louisville staff. The freshman started 35 games, hitting .280 with an on-base percentage of .345. McDonnell thinks that season was a big learning tool for Davis, even though it ended in disappointment, as he popped out for the final out of the Cardinals' season against Vanderbilt in the College World Series with the tying run on base.

"When he just got back to school, he flipped the switch," McDonnell said. "The light came on for him. And he's been on a mission ever since."

The next season saw Davis really start to improve, increasing his batting average to .372 and on-base percentage to .481. But COVID-19 cut the year short after just 17 games.

"Obviously, it sucked," Davis said. "Nobody was going to feel sorry for us, there was no sympathy. Everybody was in the same boat from big leaguers to high school kids and all levels of baseball."

So he went back home to New York and worked out with his brother. The commitment showed his head coach he wasn't just locked in during a shortened season, but even after it unexpectedly ended.

"It's like my pro players: I worry about them," McDonnell said. "I've always worried about some that weren't used to being on their own and didn't know how to handle it. Over the years, I've seen guys go backwards.

"You hit for 30 minutes or an hour, you go lift a little bit, you run and you're like, 'I did my work today.' And if I ever have a chance to talk to them, I'm like, 'You're trying to be one of 800 big leaguers in the world. And if you've got to have a job in the offseason, I'm not knocking that. But if trying to be a big leaguer is not your job in the offseason, you're not going to be a big leaguer. And what I learned is those that really have like the four, five, six or eight-hour commitment a day, that's their only shot.

"And so fortunately for Henry, I think he had that. So even when COVID hit, man he was full speed ahead. And so he kept ascending upward."

It has paid off in a major way this season. Davis is hitting .372, good for third in the ACC, with 12 home runs and 44 RBI while increasing the on-base percentage to .493. He's even stolen 10 bases while continuing to play top-notch defense. Playing catcher is physically demanding, but he continues to DH when he is not behind the plate.

"I think I became a good hitter before my swing was in the right place," Davis said. "I think there are a lot of things that are approach-related and situationally that I excelled at before the swing came around, before my body came around and I got stronger. The swing kind of met up with that. When those things lined up, it really took a step forward."

All of this could end up making him the first player in program history to be the first overall pick. And it wouldn't surprise McDonnell, who's seen 87 Cardinals either get drafted or sign pro contracts since he became the head coach in 2007.

"We like to use the phrase, 'Be professional,'" McDonnell said. "There are some kids that go about this as if they're already a big leaguer. There's that maturity level that most don't have. And he's in that category."

If he ends up being a category of one to make history, it won't be what Davis wants to be remembered for.

"I owe a lot to all these older guys who showed me the ropes," Davis said. "I want to help Christian Knapczyk, Jack Payton, Dalton Rushing and guys like that. Then in three years, they help those guys who are up and coming. I'd rather that be my legacy."