UofL kicks off their season against WKU Sept. 12. Attendance at Cardinal Stadium has been reduced to 12,000, among other new safety precautions. 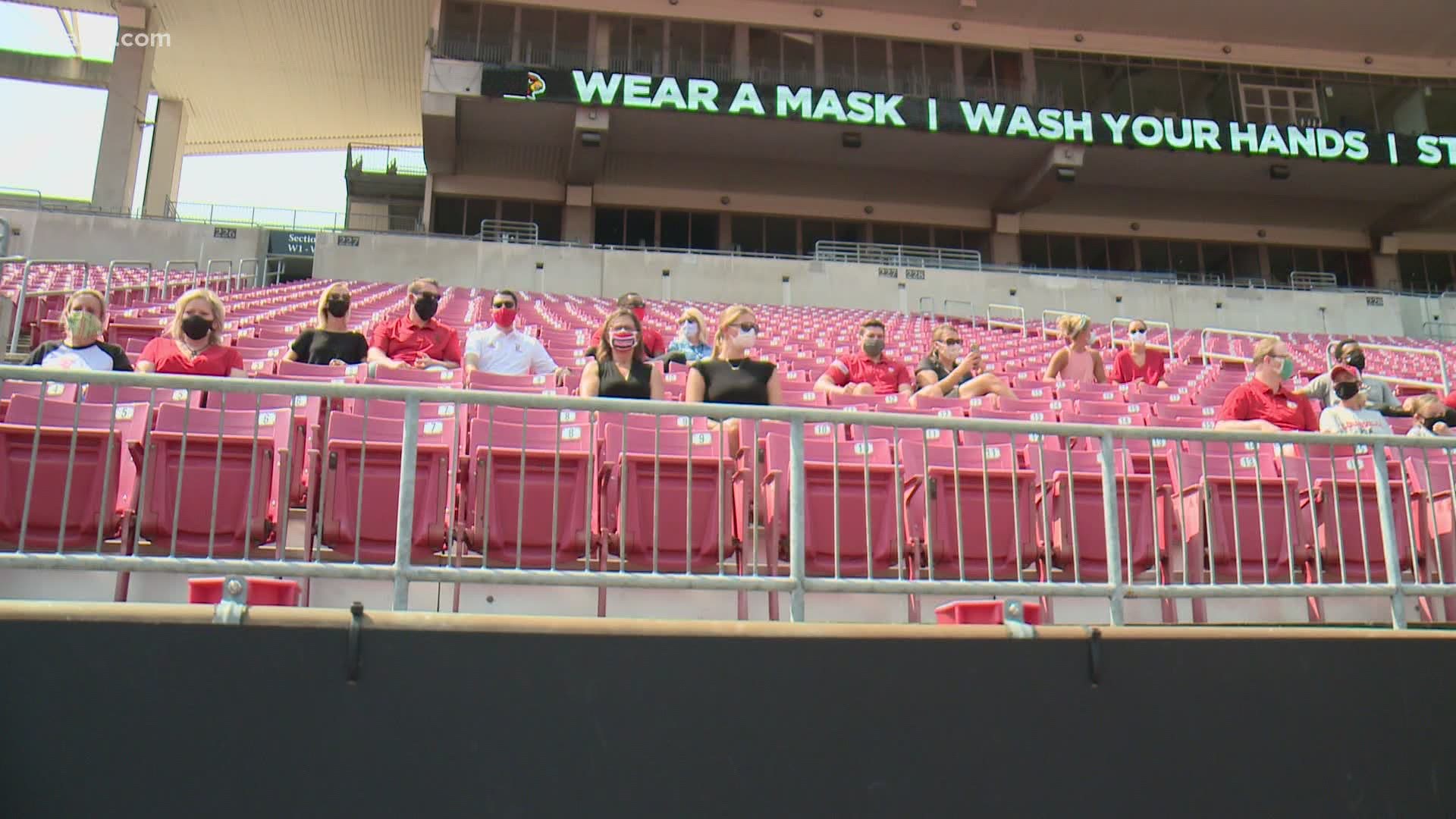 LOUISVILLE, Ky. — When the Louisville Cardinals football team takes the field this Saturday against the Western Kentucky Hilltoppers, there will be fans in the stands, though far less than would normally be on hand for a season opener. But that does not mean it will be quiet inside Cardinal Stadium.

“You’re not coming just to get out of the house," University of Louisville Athletic Director Vince Tyra said. "You really want to be here. I think their voices are going to be incredibly loud from start to finish.”

UofL has adjusted their initial seating capacity at games from 18,000 to 12,000 and seating in multiple sections is prohibited. This includes the UPS Flight Deck along with some other rows to provide proper social distancing.

Tyra said the guidelines for health and safety at Cardinal Stadium were created by a large group of people that drew on guidelines from the CDC and state and local health departments and from the protocols used at other local sporting events, like the Kentucky Derby and Louisville City FC matches.

“I think that Louisville City having seven or eight home games helps us," Tyra said. "I think the community sees it. I think going to the grocery store, all that’s going on, it’s helped to educate everybody up to this point.”

Temperature checks and face coverings are required for all fans entering the stadium. Distancing precautions are also in order within the stadium and parking lots surrounding the stadium.

Fans who have a temperature of more than 100.4 degrees will be allowed to spend some time in the "cool down area" before having their temperatures checked again.

Inside the stadium, people are not allowed to crowd together and everyone will be required to wear a mask at all times unless they are eating or drinking. Tyra said these rules will be enforced by stadium staff and security.

“If you got a repeat offender who’s clearly uneducated to the process or who’s been asleep for six months, unfortunately they’re probably going to leave,” he said.

Additionally, no tailgating will be permitted. This includes the use of tents, trailers, grills or generators. The popular tradition of Card March to welcome the team to the stadium will be discontinued for this season.

According to a press release, stadium improvements were planned to ease entry prior to the pandemic, but as a result will now offer increased physical distancing at gates.

Tyra said the parking lot will be open three hours before kickoff as opposed to five hours like it has been in the past. There will not be any tailgating allowed and Tyra said stadium staff and security will be looking for any tailgating equipment like grills. If people are found to be tailgating, they will be asked to stop.

Tyra said he is optimistic that there will be a full college football season, but he said a lot of that will depend on how fans follow the guidelines put in place, with Saturday a good preview of how the rest of the season may shape up.

“We really need fans to partner with us for week one or week two may not even happen," he said. "We’re not taking any game for granted. We’re living in a day-by-day environment. We’re managing our sports department day-by-day.”