Aaron, who was 86 years old, died peacefully in his sleep according to a news release from the Atlanta Braves. 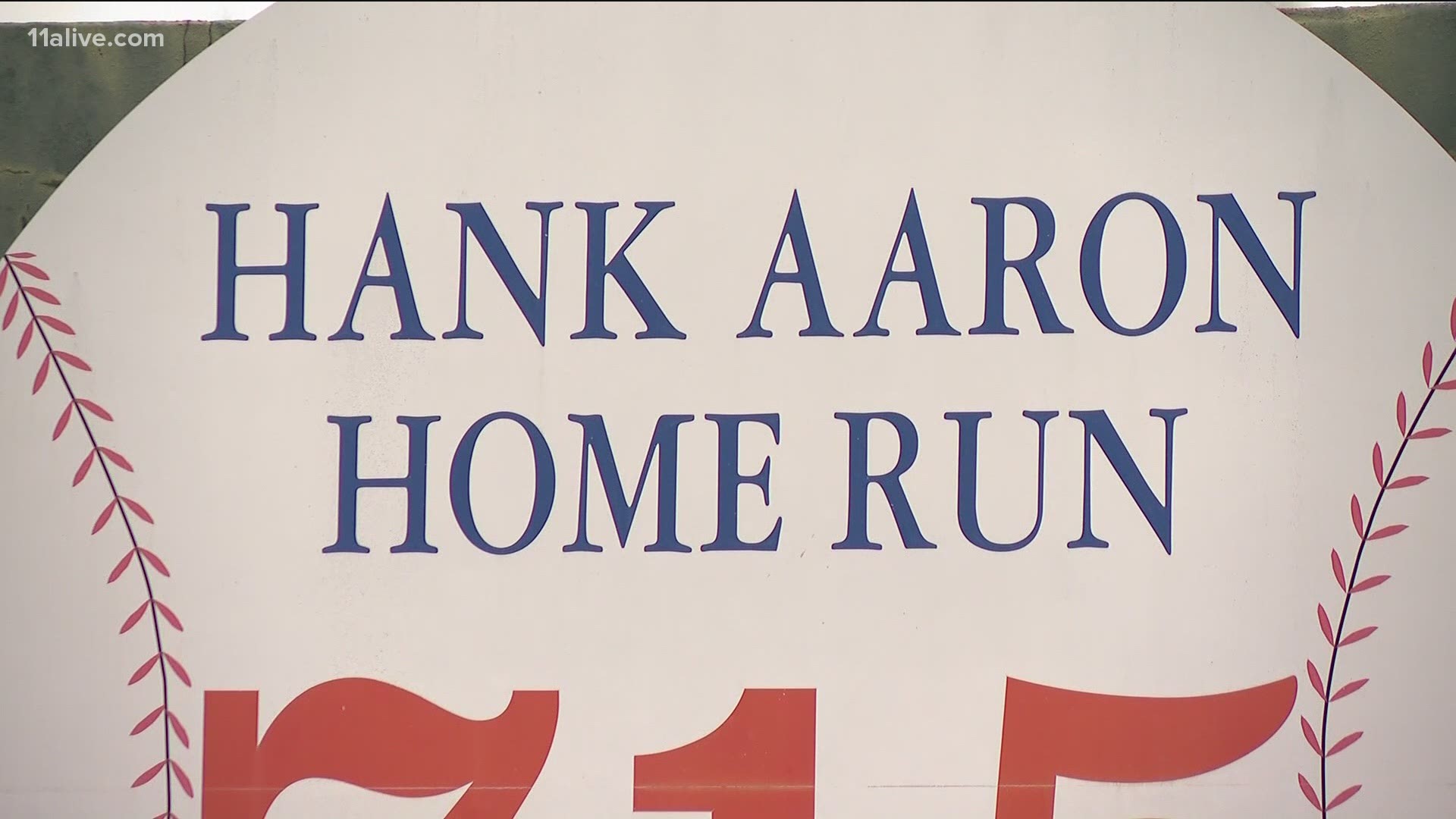 ATLANTA — The baseball world is remembering Henry "Hank" Aaron, a man who broke barriers beyond the time he spent on the field.

Aaron, who was 86 years old, died peacefully in his sleep, according to a news release from the Atlanta Braves.

After the news spread across social media, tributes for the icon started pouring in.

"Hank Aaron was an American icon and a Georgia legend. His career made history, and his influence was felt not only in the world of sports, but far beyond," the governor tweeted. "Please join us in praying for his fans and loved ones as we remember the Hammer’s incredible legacy."

Atlanta Mayor Keisha Lance Bottoms released a statement saying, "this is a considerable loss for the entire city of Atlanta"

"While the world knew him as ‘Hammering Hank Aaron’ because of his incredible, record-setting baseball career, he was a cornerstone of our village, graciously and freely joining Mrs. Aaron in giving their presence and resources toward making our city a better place," she said.

The Atlanta City Council said his "stellar play on the field earned him immortality in the hallowed halls of America’s pastime, and his support for the community, especially for education and social freedom and equality, reinforced his amazing impact in Atlanta and throughout the world.”

Former President Jimmy Carter was saddened to learn of Aaron's death, calling him a "dear friend" in a statement.

"One of the greatest baseball players of all time, he has been a personal hero to us. A breaker of records and racial barriers, his remarkable legacy will continue to inspire countless athletes and admirers for generations to come." Carter said.

Others took to social media to share their condolences.

"I can’t imagine what Hank Aaron went through in his lifetime. He had every right to be angry or militant.....but never was," Chipper Jones tweeted. "He spread his grace on everything and every one he came in contact with. Epitome of class and integrity. RIP Henry Aaron!"

I can’t imagine what Hank Aaron went through in his lifetime. He had every right to be angry or militant.....but never was! He spread his grace on everything and every one he came in contact with. Epitome of class and integrity. RIP Henry Aaron! #HammerinHank

Here is a look at other tributes.

America lost an extraordinary soul in @HenryLouisAaron. On the field, he brought power + purpose. In the community, Hank Aaron invested in progress, in people & in dreams. May his wife, Billye, his family and friends find peace in their sorrow, knowing how deeply he was loved. pic.twitter.com/TlFNuG9x0a

A baseball legend who transcended the sport. pic.twitter.com/YpQ2C5fZ5H

Hank Aaron was not only a home run king, but a king of justice. In the face of racism and vitriol, he broke through barriers with grace on his way to becoming one of the greatest baseball players of all-time. We've lost a true trailblazer and American icon.

May he rest in peace. https://t.co/HXD5bqGbnm

Others also submitted tributes to 11Alive about Hank Aaron's death.

Here is part of the statement from Robb Pitts, chairman of the Fulton Co. Board of Commissioners:

Beyond his obvious impact as the sport’s longtime homerun king, Hank loomed large as a civil rights icon whose demeanor and dignity spoke to the social change that this nation and Georgia went through at the peak of his career.

“Hank was a personal friend of mine and he was very receptive when I approached him about helping Talladega College students. I am so grateful for the support that he and Mrs. Aaron have provided for our students and for students throughout the nation.”

“The Atlanta Hawks organization is deeply saddened by the passing of Atlanta Braves legend Henry “Hank” Aaron. His greatness transcended sports. “Hammerin’ Hank” was the epitome of class and grace, breaking barriers and records with the swing of his bat.

In an interview, Hank once said baseball was not about breaking records but simply playing to the best of one’s potential. We are thankful that Hank not only played but that he lived to the best of his potential, leaving an example for our city and the world to follow.

We send our heartfelt condolences to his family, the Braves organization and the entire sports world.”

“I am deeply saddened to learn that Hank Aaron transitioned from labor to reward. Hank is known by many as one of the greatest baseball players of all time, but he was also a friend of longstanding. We grew up in the same area of Mobile, Alabama, known as Toulminville, and I have known the Aaron family for most of my life. His sister, Alfredia, was my classmate from elementary school through high school and married my friend and longtime colleague Congressman David Scott.

“Hank was not only a baseball legend, but an entrepreneur, civil rights leader, philanthropist, humanitarian, and just an outstanding human being. His humility was unparalleled, and his servant’s heart made this nation and world a better place. Vivian and I will keep Billye, Alfredia, David, and the extended Aaron family in our prayers as we all mourn the passing of this great man.”

“We are heartbroken and saddened by this morning’s passing of baseball legend, trailblazer and icon, Henry “Hank” Aaron. He not only made a great impact on the diamond, but in society as well with his caring and genuine spirit, always taking the time to be a friend to all. As an original member of the Falcons Board of Directors, he served as a mentor to so many of our players throughout the years, providing a source of knowledge and support on what it takes to build a winning culture while always displaying a great deal of humility. We loved Hank and his wife, Billye, and we are truly saddened by his passing. May he rest in peace.”