Nick Saban’s contract extended at Alabama through the 2028 Season 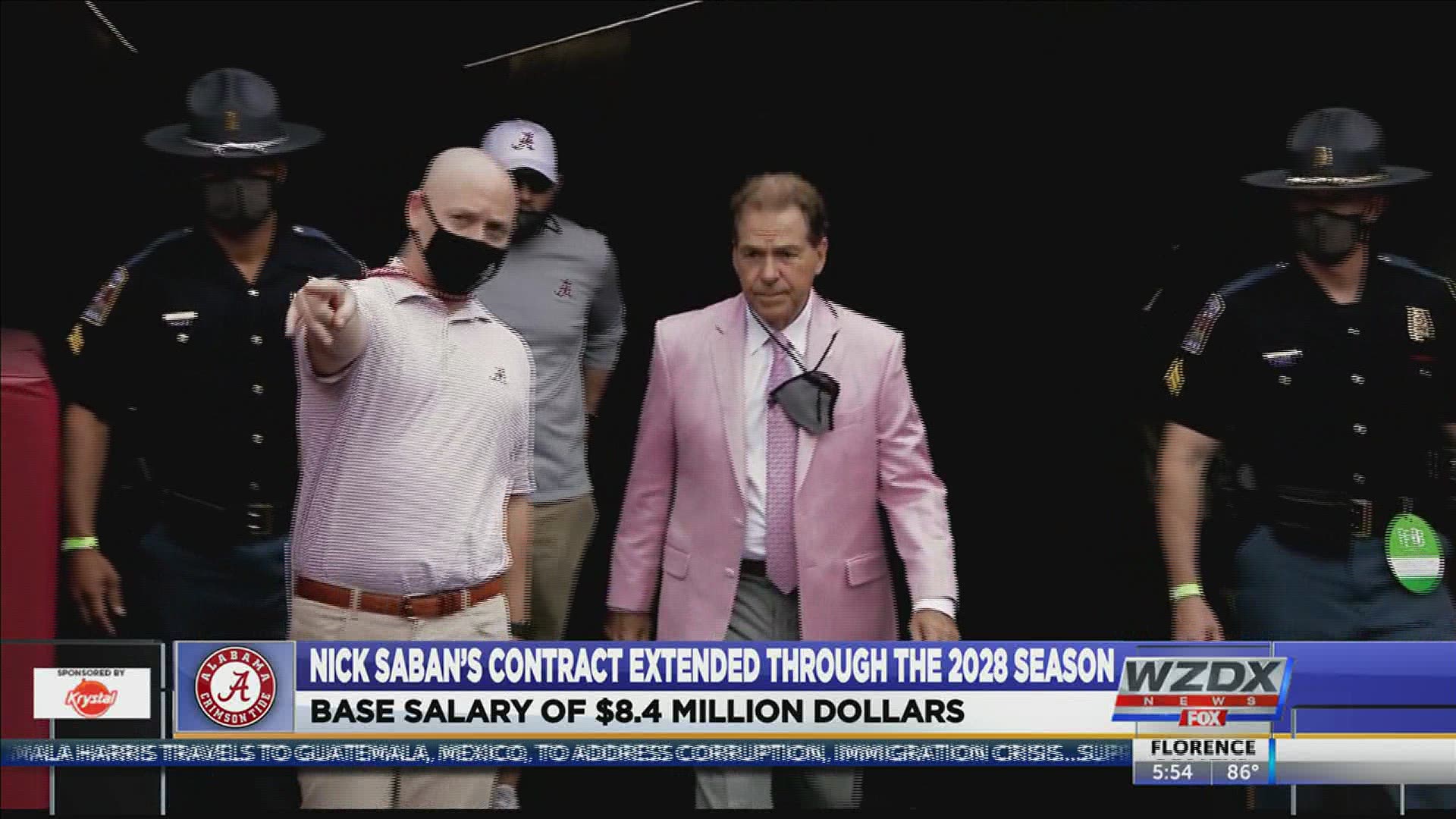 TUSCALOOSA, Ala. — University of Alabama Director of Athletics Greg Byrne announced Monday that head football coach Nick Saban and the University have agreed to a contract extension.

The new agreement will extend his current contract by three seasons to eight years and keep him in charge of the Crimson Tide football program through at least February 28, 2029. The base salary and talent fee of $8.425 million for the current contract year will increase annually throughout the length of the contract. There will also be a contract completion benefit of $800,000 payable at the end of the 2022, 2023, 2024 and 2025 contract years.

“Terry and I are pleased and happy to sign another contract extension that will keep us in Tuscaloosa through the end of our career,” Saban said. “Our family calls Tuscaloosa and the state of Alabama home, it’s a place where our roots now run deep. This agreement gives us the chance to continue to impact the lives of the young men and their families who choose to play football and get an education at Alabama. We want to thank the Board of Trustees, Chancellor St. John, President Bell, Director of Athletics Greg Byrne, our athletics administration, the football staff and the whole University community for their support.”

Saban is entering his 15th season and has led his Alabama teams to six national championships over the last 12 years, along with seven Southeastern Conference championships and a record of 170-23 (.881). In his six national championship seasons at Alabama, his teams have gone 21-2 against top-10 opponents. Alabama has been ranked No. 1 in the Associated Press Poll for at least one week for 13 straight years, which broke the record of seven established by Miami (1986-92). Saban’s 127 (127-12, .914) wins over the past decade are the most for any Football Bowl Subdivision school during a 10-year span in the Associated Press poll era (since 1936).

Alabama has been in contention for the national championship in every game played since the beginning of the 2008 season, except for the final three regular season games of the 2010 season – a staggering 151 of 154 games. The Crimson Tide has appeared in six of the first seven College Football Playoffs, winning three CFP titles (2015, 2017, 2020). UA has had a total of 51 players win 57 first team All-America honors during Saban’s tenure. The Tide has also seen 106 players selected in the NFL Draft since 2009, including 39 first round picks. Those numbers are all the best in the nation during that span. Alabama’s six first round picks in the 2021 draft tied the NFL Draft record.

“Coach Saban is the best college football coach in the nation, and one of the greatest coaches of all time in any sport, and we are extremely fortunate that he has agreed to another contract extension at Alabama,” said Byrne. “From the success of his teams on the field, to the accolades off the field and the accomplishments in the classroom, we could not be prouder of this program and what Coach Saban has done to create a championship culture in all aspects. Not only has the impact been felt here at The University, but throughout the community and the state thanks to all he and Ms. Terry have done through the Nick’s Kids Foundation and beyond. They are incredible people, and we are very thankful to have them around for many years to come.”

The Crimson Tide’s 2020 Academic Progress Rate (APR) of 990 bettered the national average for Football Bowl Subdivision (FBS) teams by 22 points. Alabama football also earned public recognition from the NCAA for their APR score figuring in the top-10 percentile nationally among all football teams, while posting a Graduation Success Rate (GSR) of 88 in the figures released last November. The Alabama football program was among six recipients of the 2019 American Football Coaches Association (AFCA) Academic Achievement Award. It marked the second time in the last three years the Crimson Tide earned the recognition with a perfect score of 1,000 in the NCAA’s single-year APR.

“Coach Saban’s impact on The University of Alabama is immeasurable,” said University of Alabama President Stuart R. Bell. “What his teams have accomplished on the field is extraordinary. Moreover, he is dedicated to ensuring his student-athletes are successful beyond their sport with a stringent focus on their academics and personal development. We’re thrilled to have Nick and Terry Saban, who are among UA’s most distinguished ambassadors, leading by example and serving others in our community for many years to come.”

Beyond the success on the field and in the classroom, the Sabans have been very involved in community initiatives. Since arriving in Tuscaloosa in 2007, Nick and Terry Saban have raised nearly $10 million for charitable causes through their Nick’s Kids Foundation. Following the devastating 2011 tornado, they teamed up with Habitat for Humanity to help rebuild a total of 13 homes and have added a house for each of the Tide’s five titles since for a total of 18 houses.

Nick Saban & Alabama agree to contract extension of 3 years, extending his deal to 8 years thru Feb. 28, 2029. The base salary & talent fee of $8.425 million for current contract year will increase annually throughout length of contract

The Sabans have personally donated $1 million to UA's first-generation scholarship fund and spearheaded fundraising efforts for the new St. Francis Catholic Church student center, which is named in their honor. The Sabans and Nick’s Kids also helped the Tuscaloosa Juvenile Detention Center build a state-of-the-art welding and GED classroom addition. Most recently, the Sabans announced plans for the Saban Center, which creates a learning center on the Black Warrior River that brings together the Children’s Hands-On Museum, Tuscaloosa Public Library and the Tuscaloosa Children’s Theater. The Sabans made a personal gift of $1 million to the project and the Nick’s Kids Foundation contributed another $250,000. The Sabans also donated $1 million to The Crimson Standard, Alabama’s capital initiative that is designed to comprehensively elevate the student-athlete experience.

Members of The University of Alabama System Board of Trustees have been notified of the proposed terms and conditions of this contract extension. The financial terms remain subject to the Board’s approval.