VERIFY: Were protesters tear-gassed to clear the way for Trump's walk to church?

What counts as tear gas? The president's campaign is demanding retractions amid outrage over how demonstrators were dispersed in Washington. 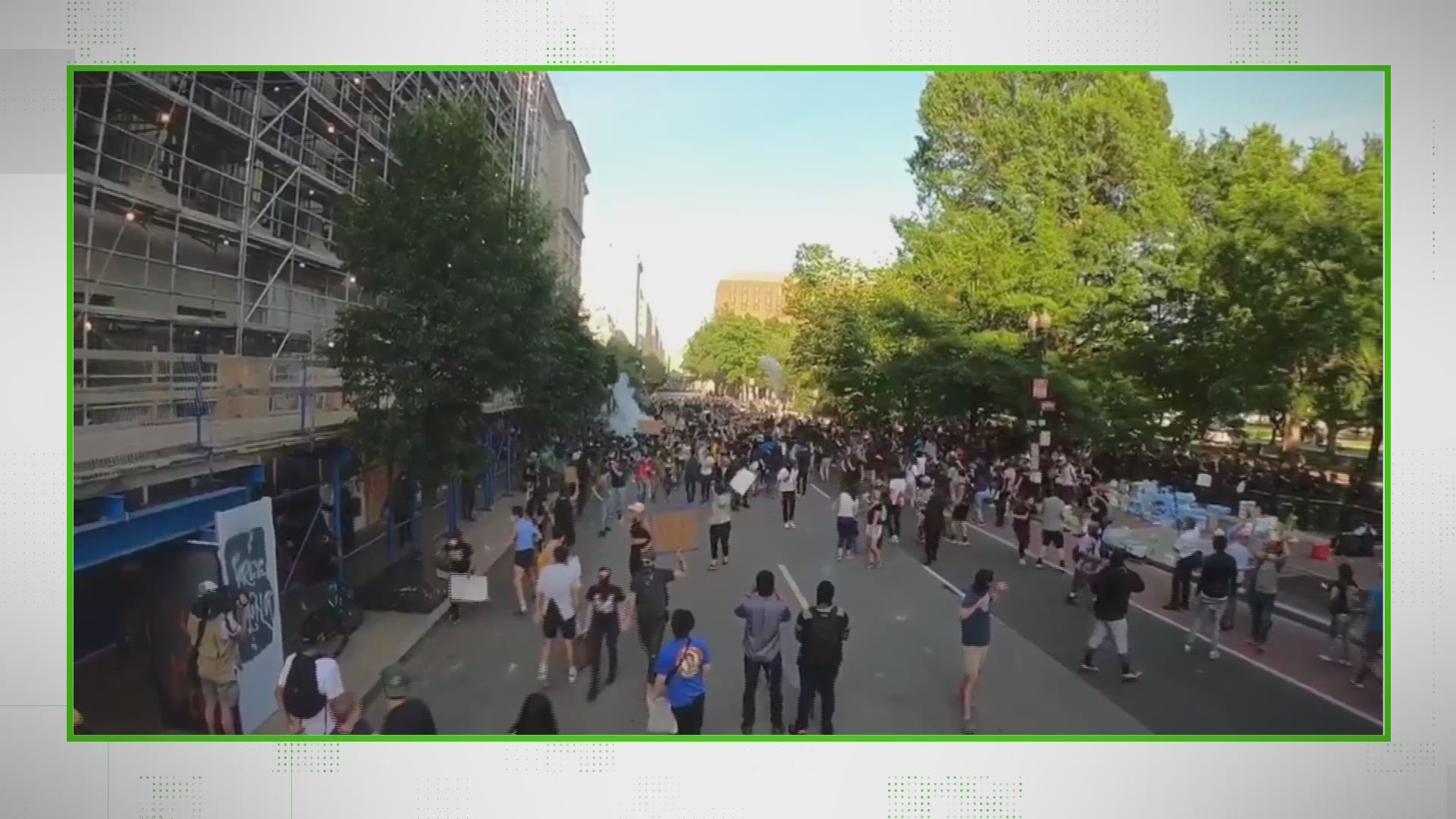 There’s a national debate about whether or not tear gas was used to clear out protests before President Trump and his staff walked from the White House to a nearby church.

Photos and videos of the event show National Park Police, National Guard members, local police officers and the Secret Service all working together to move the protests.

On the other side of their line, protesters and journalists filmed the encounters and claimed that tear gas and other riot control measures were used to push demonstrators out of the area.

Did law enforcement use tear gas to clear protesters from Trump’s path?

Technically, yes. The U.S. Park Service used pepper balls and smoke canisters, which irritate the eyes and throat and cause coughing, to disperse the protesters. The U.S. Centers for Disease Control and Prevention says, “Riot control agents (sometimes referred to as ‘tear gas’) are chemical compounds that temporarily make people unable to function by causing irritation to the eyes, mouth, throat, lungs, and skin.”

When President Trump made an unexpected walk with his aides on Monday, June 1 to St. John’s Episcopal Church for photos, protesters were outside the historic building at Lafayette Park. Most news accounts described the protesters, outraged by the killing of George Floyd while detained by Minneapolis police, as peaceful. Fox News, an outlet the president prefers while often criticizing others, said, “It was a jarring scene as police in the nation's capital forcefully cleared young men and women gathered legally in a public park on a sunny evening, all of it on live television.”

RELATED: VERIFY: No, bricks are not being staged in Atlanta for violent protests.

RELATED: VERIFY: No, pipe bombs were not found by the Korean War Veterans Memorial, despite online rumors

However, the U.S. Park Police depicted the protesters differently in its release on the incident. It said the protesters were combative, threw projectiles at officers and tried to grab their weapons. “Officers then employed the use of smoke canisters and pepper balls. No tear gas was used by USPP officers or other assisting law enforcement partners to close the area,” it said. No arrests were made, it said as well.

On Tuesday, Trump’s re-election campaign demanded corrections and retractions from news organizations, contending the pepper balls and smoke did not constitute tear gas.

But when the VERIFY team started digging into this topic, we found that there isn't a legal or official definition of "tear gas." That means this debate basically comes down to semantics.

Here’s what we mean.

Credit: AP
Tear gas floats in the air as a line of police move demonstrators away from St. John's Church across Lafayette Park from the White House, as they gather to protest the death of George Floyd, Monday, June 1, 2020, in Washington. Floyd died after being restrained by Minneapolis police officers. (AP Photo/Alex Brandon)

The CDC says “riot control agents (sometimes referred to as 'tear gas') are chemical compounds that temporarily make people unable to function by causing irritation to the eyes, mouth, throat, lungs, and skin.” Other definitions - like this 2013 study published in the National Library of Medicine - say only certain chemicals qualify as “tear gas.”

And that’s why this is a semantics argument. Officials are separating “pepper balls” from “tear gas,” but the objective of the two are the same; to irritate your skin and eyes as a form of riot control.

While the debate over the term continues - WE can VERIFY these protestors and journalists had riot control measures used against them that caused irritation and tears.