VERIFY: Yes, voter intimidation is real. Here's what you can do.

Some social media posts are adding to midterms confusion by claiming to warn of scare tactics at the polls. Are they accurate or are they just contributing to the very tactics they claim to point o...

(NEWS 8) - Some social media posts are adding to midterms confusion by claiming to warn of scare tactics at the polls.

Are they accurate or are they just contributing to the very tactics they claim to point out? 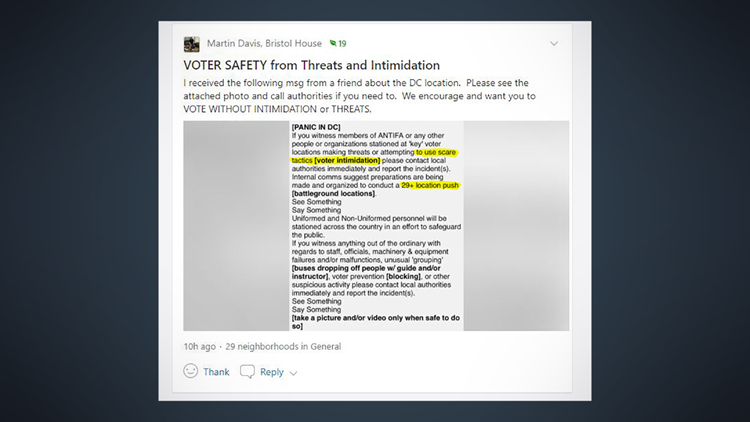 The post above is not alone in claiming that certain political groups will be participating in voter intimidation on election day.

While the image above points to ANTIFA as a possible culprit, other articles accurately point to instances of voter intimidation from right wing and White Nationalist groups.

These posts can't definitively be VERIFIED in advance of the election, but the underlying idea of voter intimidation is very real and damaging.

The Brennan Center for Justice define multiple examples of voter intimidation including:

WHAT CAN YOU DO?

United States Federal Laws lay out clear definitions of the term and the punishments associated with it.

"Whoever intimidates, threatens, coerces, or attempts to intimidate, threaten, or coerce, any other personfor the purpose of interfering with the right of such other person to vote or to vote as he may choose, or of causing such other person to vote for, or not to vote for, any candidate for the office of President, Vice President, Presidential elector, Member of the Senate, Member of the House of Representatives, Delegate from the District of Columbia, or Resident Commissioner, at any election held solely or in part for the purpose of electing such candidate, shall be fined under this title or imprisoned not more than one year, or both."

The ACLU and USA.gov both have extensive ways for you to contact officials, and the Voting Section of the DOJ lists the following as options to report potential voter intimidation.