Where do the candidates for Kentucky's governor stand on key issues?

Medial marijuana, abortion, and pension are some of the hottest topics of the 2019 election. See what the governor candidates have to say about them. 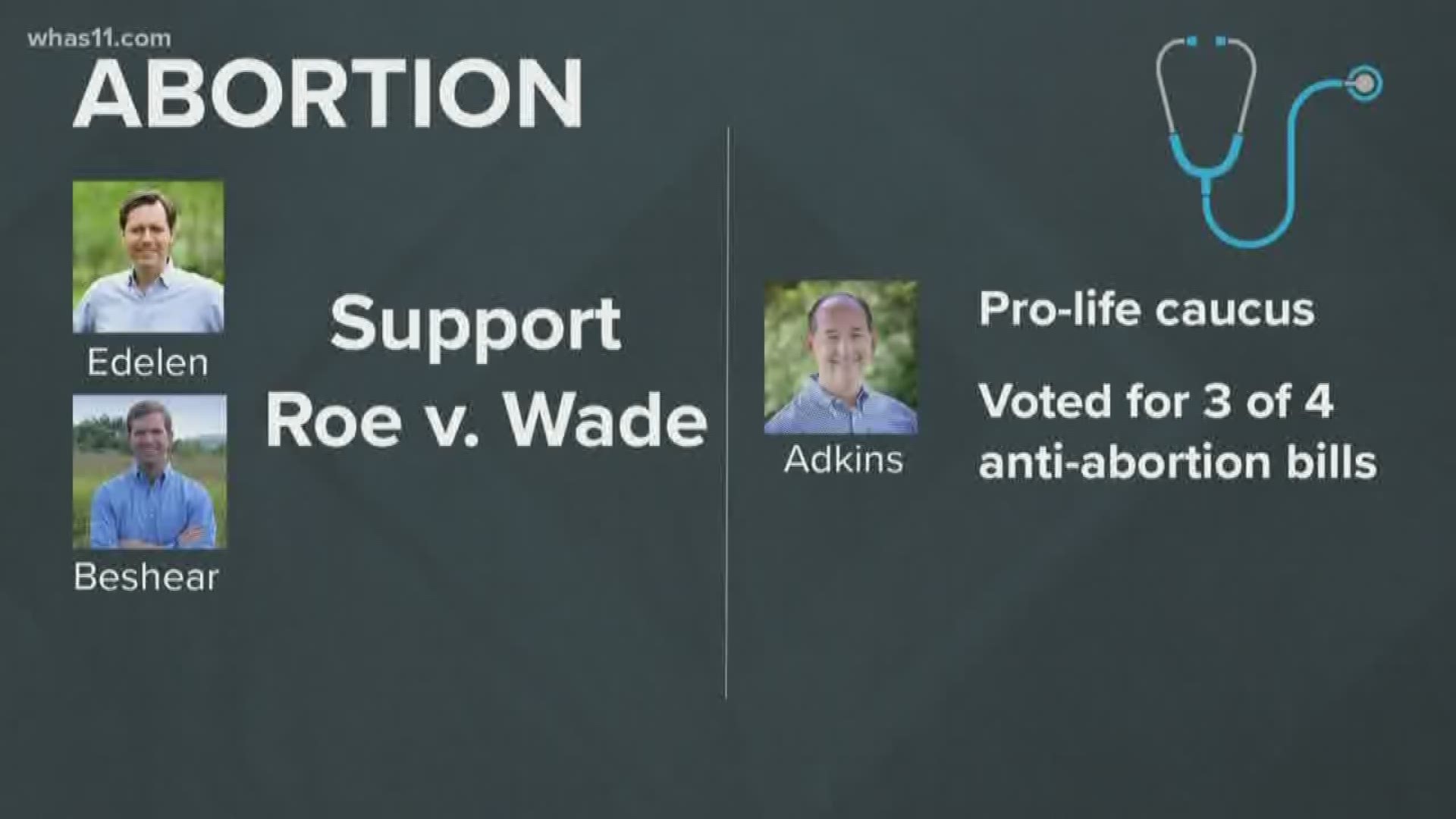 Tuesday is the day of the Primary Election in Kentucky. Voters will head to the polls to pick the candidates that will face off in November from each party.

The race for governor will be the race to watch, so we took a look at the top candidates and broke down their stances on some hot topics in the political realm. The candidates we list are the ones who have consistently polled at 5% or higher and we looked at their platforms, debates, interviews, and votes cast to compile this information.

On the Democratic side, we have Adam Edelen, Rocky Adkins, and Andy Beshear. For the Republican side, we have our current governor, Matt Bevin, and challenger Robert Goforth.

Medical Marijuana is a topic that all of the candidates more or less agree on. Edelen and Adkins have both said that they support the legalization of medical marijuana. Adkins is a cancer survivor, and he wants to make medical marijuana available to those who are also suffering from serious illnesses and chronic pain. Goforth has also sponsored bills that would legalize medical marijuana.

Governor Matt Bevin has said that he's open to signing a bill that would legalize it, but he would have to read it first before committing. Andy Beshear would want to put it on a ballot and let the people decide. He also said that if it came to a vote, he would vote in favor of it.

Kentucky is one of several states that has recently passed laws aimed at restricting or eliminating abortion access. This year's Republican candidates are essentially on the same page on this issue. Goforth has sponsored anti-abortion legislation, and Bevin has signed it.

RELATED: Why is voter turnout so low for the Kentucky primary?

On the Democratic side, it's more of a mixed bag. Both Beshear and Edelen support Roe v. Wade remaining the law of the land. Adkins, on the other hand, is a member of the pro-life caucus in the Kentucky State legislature. He has also backed anti-abortion bills, but he hasn't agreed with all of them.

Kentucky's pension crisis may be the key issue of this year's election. Every candidate agrees that we are in a mess that needs to be cleaned up. Beshear and Adkins both say that Bevin's tactics have been wholly unsuccessful.

"When this governor tried to slash pensions, I went to the Supreme Court and personally argued for the promised pensions of more than 200,000 teachers, police officers, firefighters, EMS, social workers and nearly all city and county employees in Kentucky," Beshear said on his campaign website.

"What happened to educators and public employees during Matt Bevin's administration is inexcusable," Adkins says on his campaign website. Adkins also told WFPL that he is against privatizing public pensions.

Adam Edelen said that he hopes that modernizing the economy and rewriting the tax code will help provide the necessary revenue to pay for Kentucky's financially-ailing public pensions systems. He told the Lexington Herald-Leader that "protecting pensions isn't the best we can do, it's the least we can do."

Matt Bevin has defended his actions, saying that has attacked the pension crisis head-on. "I've never wavered from my original promise to give everything I have...to fix this problem," he said on his campaign website. He says he fought against political pressure and those who tried to come against him "because it was the right thing to do."

Robert Goforth says that pensions are a promise made to city employees and that it is a promise that cannot be broken. "We need to quit alarming people and start finding effective solutions," he says on his campaign website.