What passed and failed in 2021 Georgia General Assembly

Here’s a look at the status of some significant issues. 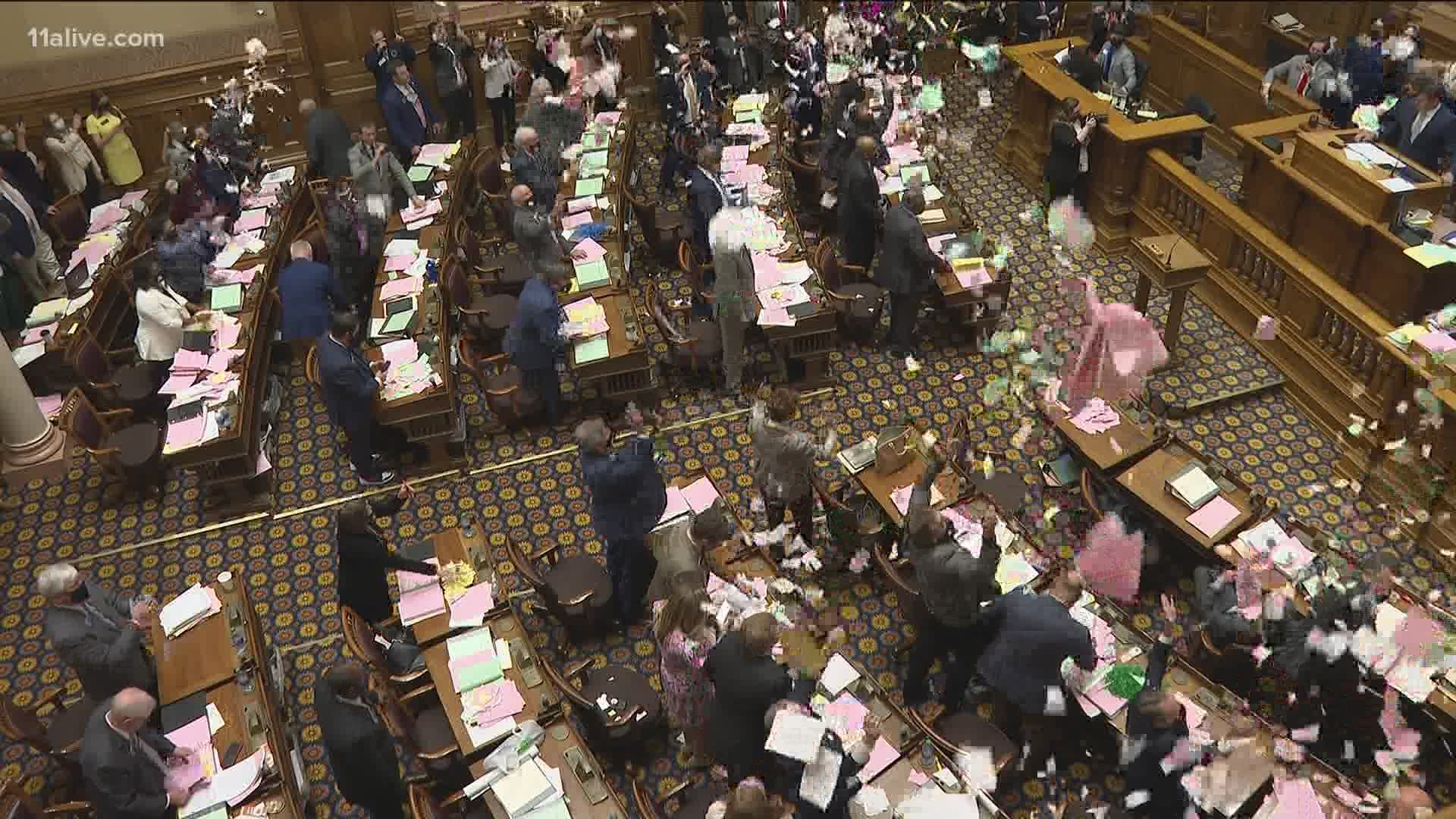 ATLANTA — Georgia’s General Assembly concluded its 2021 session on Wednesday, with lawmakers still needing to act on the state budget and many other bills. Some key proposals had already passed, like an overhaul of state elections law that restricts some kinds of voting and a small income tax cut.

Here’s a look at the status of some significant issues:

INCOME TAX CUT: Georgia will raise the amount of money someone could earn before paying income taxes under House Bill 593, which Gov. Brian Kemp has already signed, cutting overall taxes by $140 million.

CITIZEN’S ARREST: House Bill 479 would abolish the Georgia law that allows private citizens to arrest someone, while still allowing security guards and store employees to hold people they accuse of a crime until police arrive. Kemp applauded the passage, saying the statute "strikes a critical balance by allowing Georgians to protect themselves and their families, while also repealing Civil War-era language in our laws that is ripe for abuse."

TAX BREAKS: Senators and representatives are trying to negotiate a deal over Senate Bill 6, which deals with new tax breaks as well as a review of how much revenue the state if forgoing because of tax breaks.

SCHOOL VOUCHERS: Senate Bill 47 would broaden eligibility for a program that pays for children with special education needs to attend private schools. The House failed to consider House Bill 60, which would have created a new educational savings account program to provide vouchers for private schools and home schooling.

DEFUND THE POLICE: House Bill 286 says cities and counties can’t cut spending on their police departments by more than 5% a year.

LAWSUIT LIABILITY: House Bill 112 would renew until July 2022 Georgia’s law protecting businesses and others from being sued if someone blames them for contracting COVID-19.

HOME-SCHOOLED ATHLETES: Public schools would be required to let home-schooled students take part in athletics and extracurricular activities as long as they take at least one online course through the local school under Senate Bill 51 and Senate Bill 42.

HAZING: Senate Bill 85 would making it a misdemeanor to force people to consume any substance likely to cause vomiting, intoxication or unconsciousness.

PORCH PIRACY: House Bill 94 would make it a felony to steal packages from three or more different addresses.

HUMAN TRAFFICKING: Senate Bill 33 would allow victims or state officials to file civil lawsuits seeking money damages against traffickers while Senate Bill 34 would make it easier for people who have been trafficking victims to change their names.

INDICTED OFFICIAL PAY: Senate Resolution 134 would let voters decide whether to amend the state constitution to suspend the pay of elected state officials who are indicted.

PROBATION: Senate Bill 105 would create a path for some people to ask a judge to release them from probation after three years of supervision.

TEACHER INCENTIVES: House Bill 32 would give a $3,000-per-year state income tax credit to some Georgia teachers who agree to work in certain rural or low performing schools.

ADULT CRIMINAL AGE: The age for charging most people with adult crimes would have risen from 17 to 18 in Georgia under House Bill 272.

COAL ASH: House Bill 647 would have required 50 years of groundwater monitoring at coal ash ponds near power plants that are closed.

DISTRACTED DRIVING: Georgia drivers wouldn’t be able to avoid penalties by telling judges they have purchased hands-free devices for their cellphones under House Bill 247.

PATIENT VISITATION: Hospitals and nursing homes could be required to allow patient visitors, after many cut visitor access because of the coronavirus pandemic, under House Bill 290, although the Senate version strips those mandates

GUN LAWS: House Bill 218 would loosen Georgia law to allow anyone from any state that has a concealed weapons permit to carry their gun in Georgia and prohibit gun permitting, gun sales and shooting ranges from being shut down in a state of emergency.

PROTEST LIMITS: House Bill 289 would require a permit for any protest statewide, and classify it as an illegal assembly if two or more people harass someone in a wide range of public places, and enact harsher penalties for acts including blocking highways.

PROSECUTORIAL MISCONDUCT: The state would create a new commission that could investigate and discipline elected district attorneys and prosecutors in House Bill 411.

Editor's note: An earlier version of this story incorrectly reported that HB 605 passed in the Senate. This story has been updated to reflect that.

For the latest reporting on the last day of the legislative session, click here.