The National Guard said arrangements are being made to send 15,000 of its members home within the next five to 10 days. 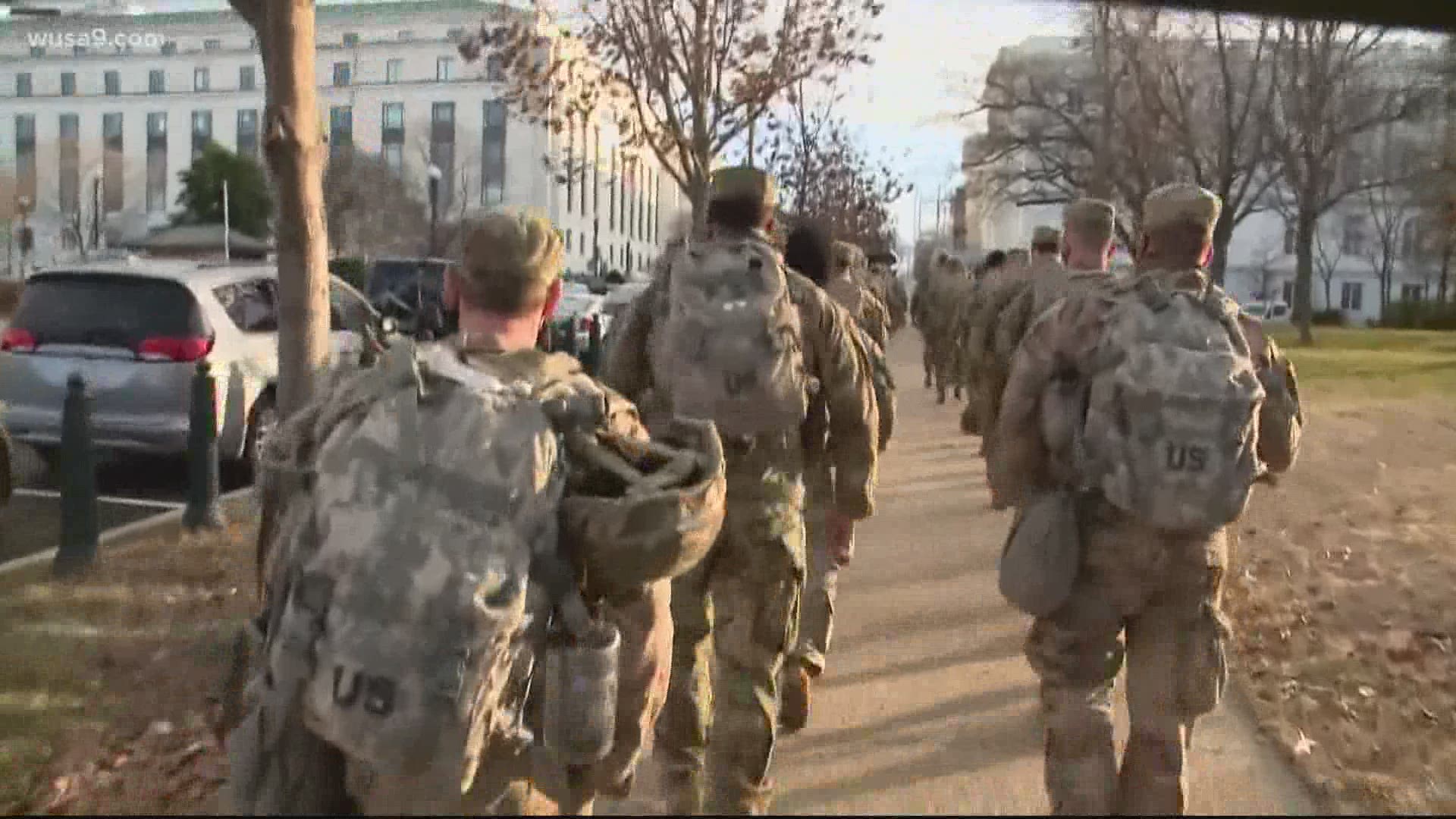 WASHINGTON — The National Guard has released plans to dramatically scale back its presence in D.C. over the next couple of days.

According to the National Guard, 26,000 members served in the District on Inauguration Day. Now, less than half of those members remain on duty. The Guard said arrangements are also being made to send 15,000 of its members home within the next five to 10 days.

RELATED: 'I am very grateful we have a new president' | DC mayor plans for statehood under Biden administration

But the National Guard said, in a press release, that in order to fulfill requests made on the behalf of agencies like Capitol Police and Secret Service, many of its members could stay in town through Jan. 31.

“Some agencies are requesting continuity of operations, additional support and recuperation time for their forces to regroup,” the National Guard stated. “Approximately 7,000 National Guard personnel are anticipated to provide that assistance through the end of the month.”

A letter from Dr. Christopher Rodriguez, director of the DC Homeland Security and Emergency Management Agency, to DC National Guard Major General William Walker shows the District requested 500 unarmed local guard members stay at the Armory through the end of the month.

If you missed today's situational update, here are some key highlights.

You can also view the full presentation by visiting the following link: https://t.co/4JV5XnYs1P pic.twitter.com/uEKhVbXJTy

D.C. asked that those members be trained with the ability to provide crowd management and public safety support through the manning of traffic control points.

“The availability of these National Guard resources to assist the MPD would greatly enhance our ability to successfully accomplish our mission of securing the safety of the residents and visitors of the District of Columbia,” Rodriguez wrote.

The Capitol Hill neighborhood sits directly east of the Capitol Building. Much of that community found itself under heavy security during the inauguration. Now, many police checkpoints in that area have been removed, while the National Guard’s visibility has been reduced. 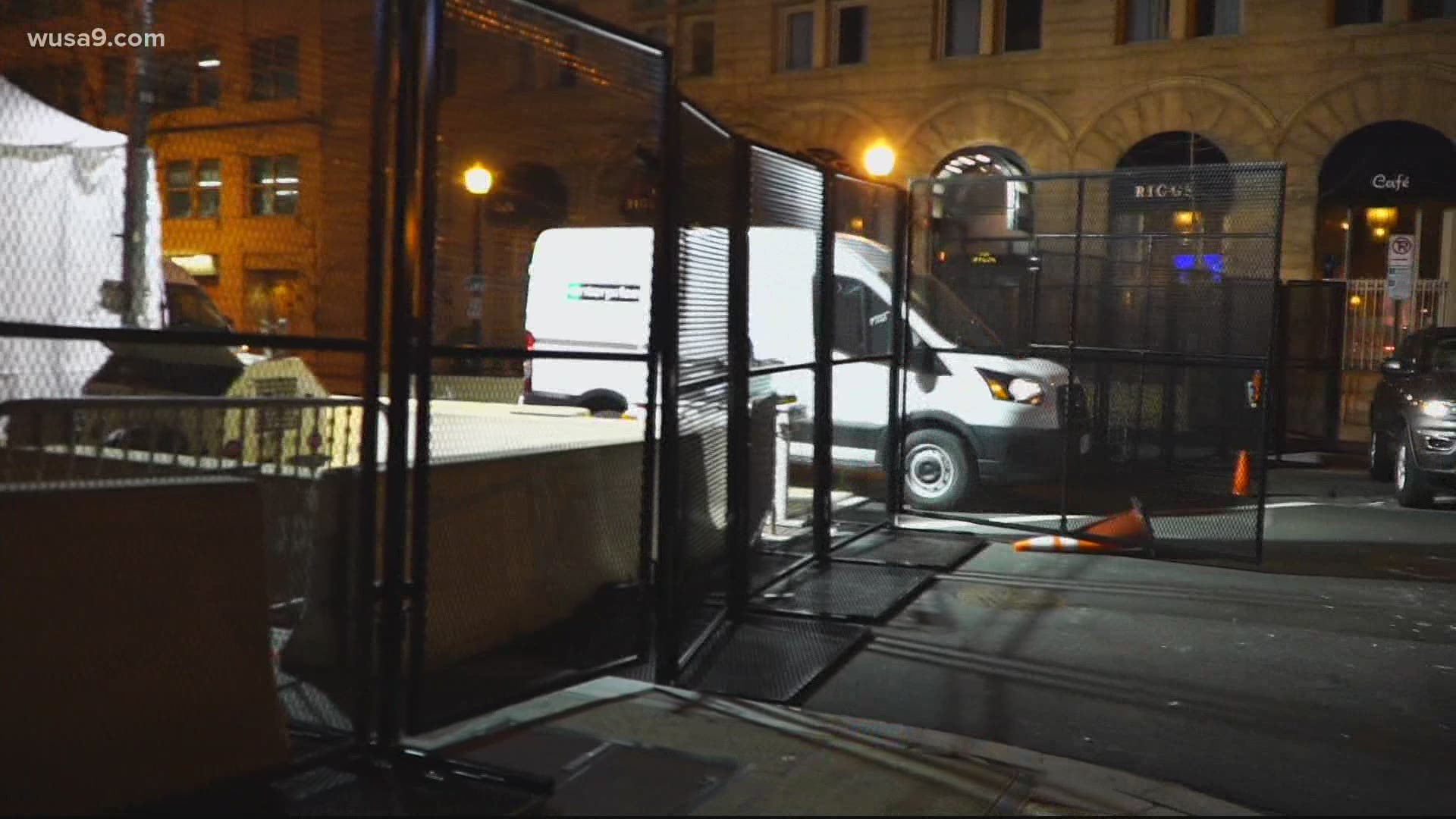 Capitol Hill resident Leslee Behar said she appreciated the National Guard’s help during the inauguration. However, she said she would like to see the guard’s numbers on the ground be reduced even faster.

“I'm not worried, I sleep at night," she said. "I trust the people that are here to protect us, will protect us."

“We know you have to balance public safety with security,” she said. “And, so we have confidence in the mayor and her thoughtfulness.”

Politico reported late Thursday that National Guard troops were forced out of the Capitol and relocated to a nearby garage.

Sen. Tammy Duckworth tweeted about the situation expressing outrage, before offering an update the troops had been allowed back into the Capitol building.

Update: Troops are now all out of the garage. Now I can go to bed.

“I want to assure everyone that, with the exception of specific times on Inauguration Day itself while the swearing-in ceremonies were underway, the United States Capitol police did not instruct the National Guard to vacate the Capitol Building facilities," Pittman said. “As of this morning, all Guardsmen and women have been relocated to space within the Capitol Complex. The Department is also working with the Guard to reduce the need for sleeping accommodations by establishing shorter shifts, and will ensure they have access to the comfortable accommodations they absolutely deserve when the need arises.”