Mayor Bowser attended the inaugural events, which she called "thoughtful and inspirational." She also talked heavily about statehood. Here's a recap. 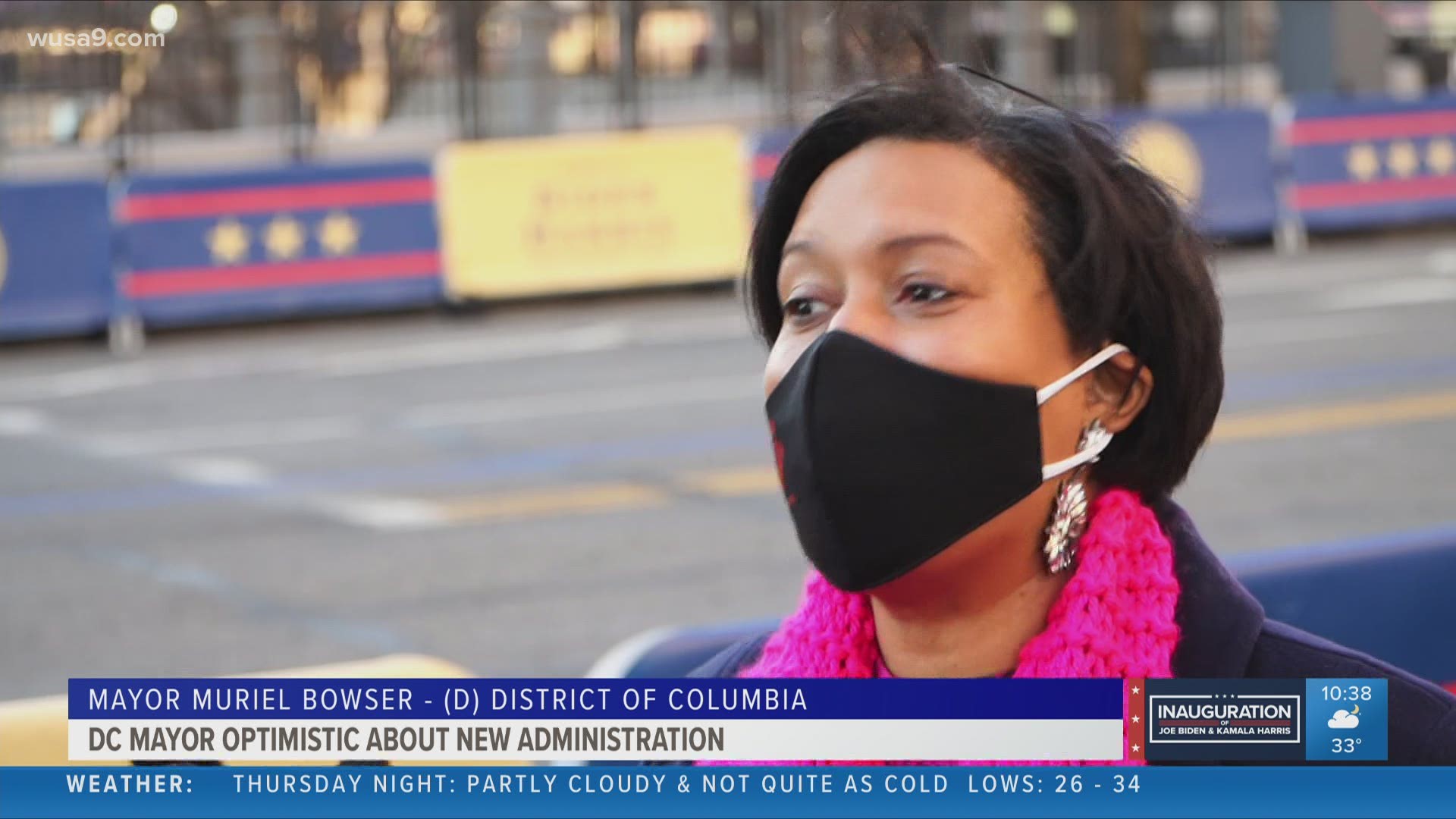 WASHINGTON — D.C., and the country, welcomed new leadership as President Joe Biden and Madam Vice President Kamala Harris were inaugurated Wednesday. And in the midst of greeting a vast entourage of reporters and supporters, the new POTUS made a sharp turn to greet someone on the parade route: D.C. Mayor Muriel Bowser.

Through masks, the two politicians leaned in to chat, even fist-bumping each other in what's been already dubbed the 'Biden bump' on social media.

Bowser, who has hailed as D.C.'s mayor since 2015, shared her excitement for the new administration and the plans she hopes they can achieve for the District together.

1/ Thank you to Team Biden for planning a thoughtful, inspirational and dignified Inaugural event that celebrated a fresh start and respected the moment.

Thanks to the members of Congress who made this event so special, especially after the horrific events of January 6

"I feel very grateful that we have a new president," she said to WUSA9 just outside the parade route. "We have a person who is decent, will bring dignity to the office and represent all of us Americans."

When asked about Biden's COVID relief plan, which focuses more on state relief than Trump's, Bowser seemed optimistic at the federal response.

Credit: AP
President Joe Biden talks with Washington, D.C. Mayor Muriel Bowser as he and and First Lady Jill Biden walk along Pennsylvania Avenue in front of the White House during Inaugural celebrations, Wednesday, Jan. 20, 202, after being sworn in as the 46th vice president of the United States. (Doug Mills/The New York Times via AP, Pool)

"Well hopefully what it means is that we will have a real sense of when the vaccines will be available and it will be more quickly produced," she continued, saying the District has a scarcity of vaccines and that residents deserve answers.

Asked if she believes the new administration will quickly progress D.C. to become the 51st state, an effort Bowser has long championed, she seemed hopeful.

"We have Democratic control of the House of Representatives, the Senate and now the White House, and the leadership in all of those bodies have expressed support for D.C. Statehood," she said, adding that Joe Biden is a "longtime" supporter of the District becoming a state. 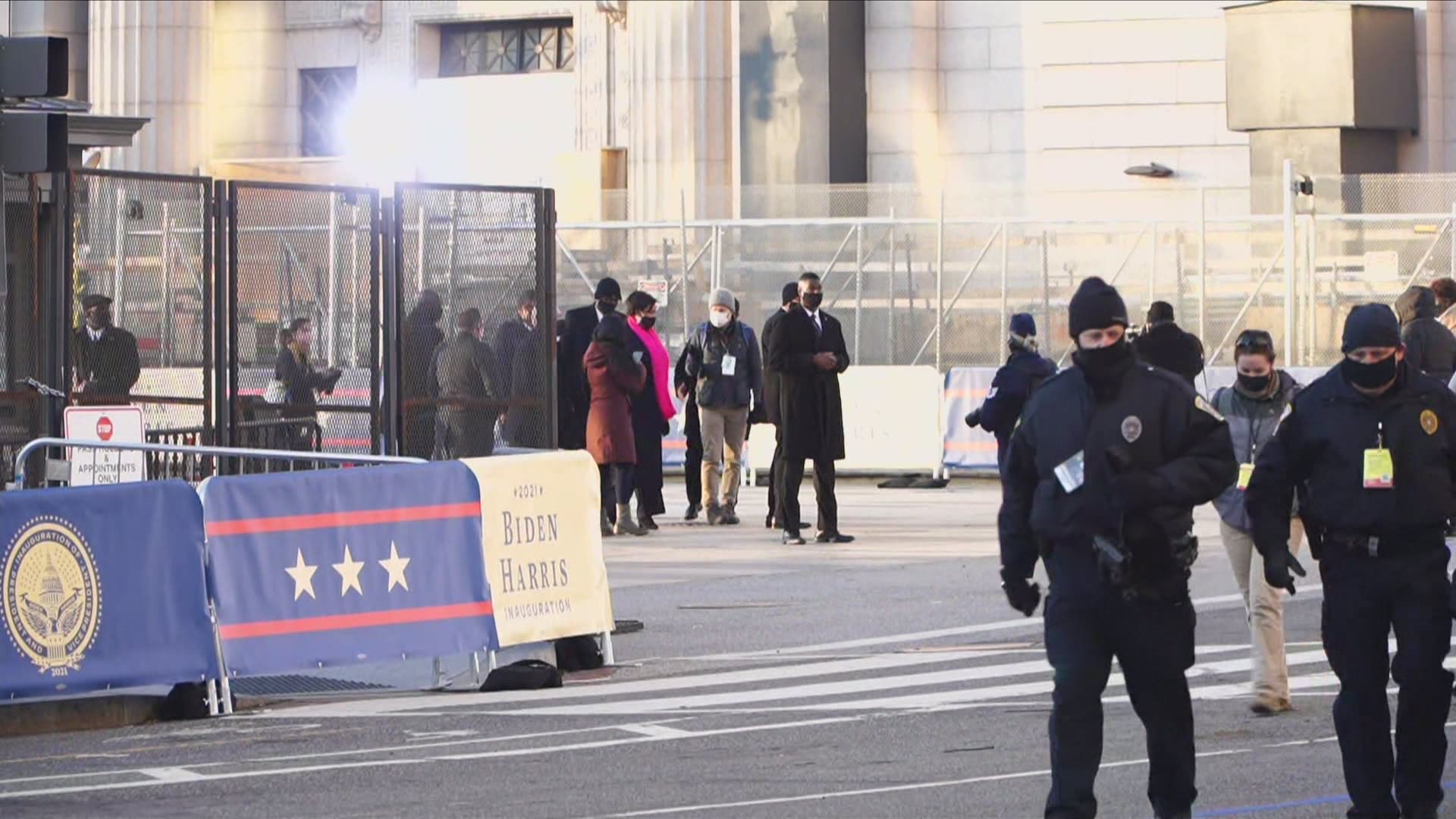 RELATED: 'Our power is in peace' | Mayor Bowser responds to President Trump's criticism of protest response

Former President Donald Trump and Mayor Bowser had a contentious relationship, with back and forth disagreements over federal oversight approaches in D.C. and the militant decisions that culminated in violence and outrage.

That tension came to an explosive finale on Jan. 6, where riots and insurrection at the U.S. Capitol building resulted in MPD officers stepping in for assistance after calls to the National Guard were ignored.

"We had 58 officers injured," Bowser said about MPD assistance in the riots. "People need to be held accountable for the felonious acts they committed."

New rule... Anyone protecting the Capital should have a vote in the Capitol. https://t.co/qFLP5Opfap