Beshear said the budget he submits later this month will include his campaign pledge for a $2,000 across-the-board pay raise for teachers.

FRANKFORT, Ky. — The General Assembly agrees with Governor Andy Beshear in striking a new tone of unity at the Capitol.

As program promises were made again by Beshear, Republican leaders called this speech pleasant then questioned whether they can manage and govern all of the promises.

“A pension is a promise and we should treat it as such,” Beshear said.

There was bipartisan support for funding pensions and sports gaming.

“Rep. Adam Koenig has sponsored a sports betting bill – I fully support it and we should pass it,” he said.

That bill gets a hearing on Wednesday and while the tone was applauded across party lines, Governor Beshear’s hopes for keeping promises he’ll present in his budget were not well received in the Capitol.

“My commitment will continue with including a $2,000 dollar across the board raise for our Kentucky teachers in my budget that we submit to you,” he said. “We can and we must afford it. We must end our historic cuts to our universities and community colleges.”

Republican leaders say they can work with him on items like criminal justice reform. They have concerns about Beshear’s hope for a constitutional amendment to automatically restore felon voting rights.

House Speaker David Osborne called the State of the Commonwealth address a pleasant speech but was critical of the substance.

“The only thing he didn’t propose was puppies and we might just throw those in because it is great to throw out wonderful proposals and ideas but at some point, we have to face the reality of how we are going to manage those and how we are going to fund them,” he said.

There was a mention of expanded casino gaming which stands no chance of passing this session but no mention of marijuana. There is some bipartisan hope that at least medical marijuana can be legalized.

While the tone of hope continues, it was clear the heavy lifting of this session is about to begin and test whether the tone can stand up to the load.

Read the Governor's full remarks below: 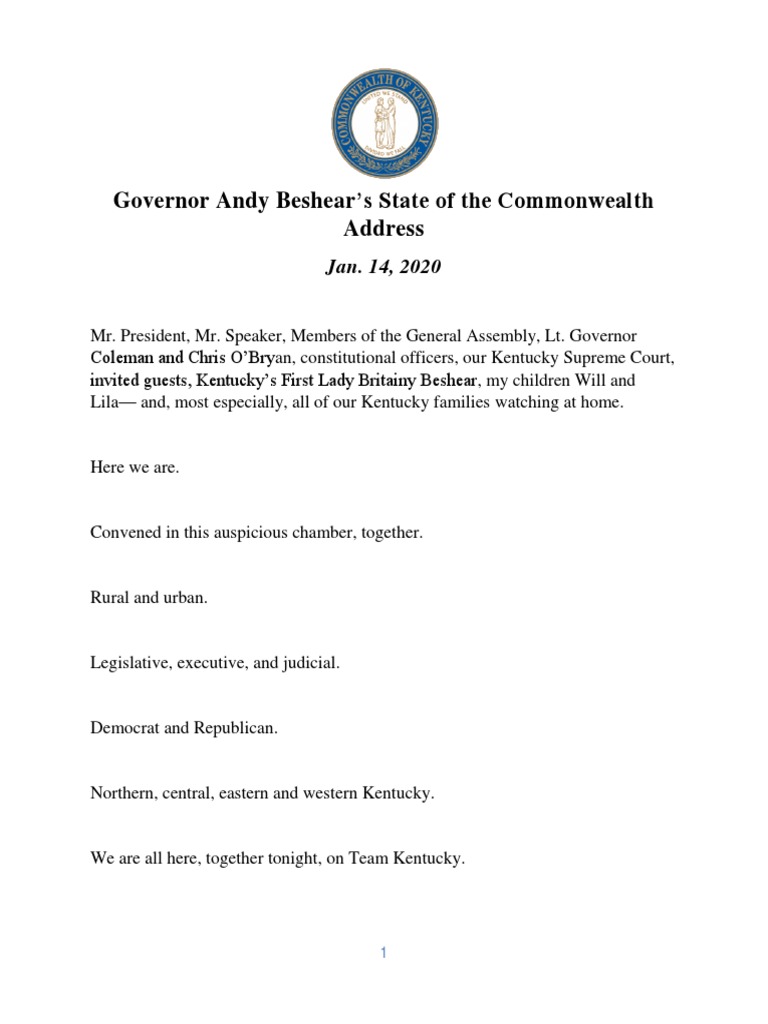 2020 State of the Commonwealth Address | Prison
Address Jan. 14, 2020 Here we are. 1And because of that, I am proud to report to you tonight that the state of ourcommonwealth is strong, coming together, and ready to face our challenges.We are all here, together, with an opportunity to fulfill the promise that isKentucky.