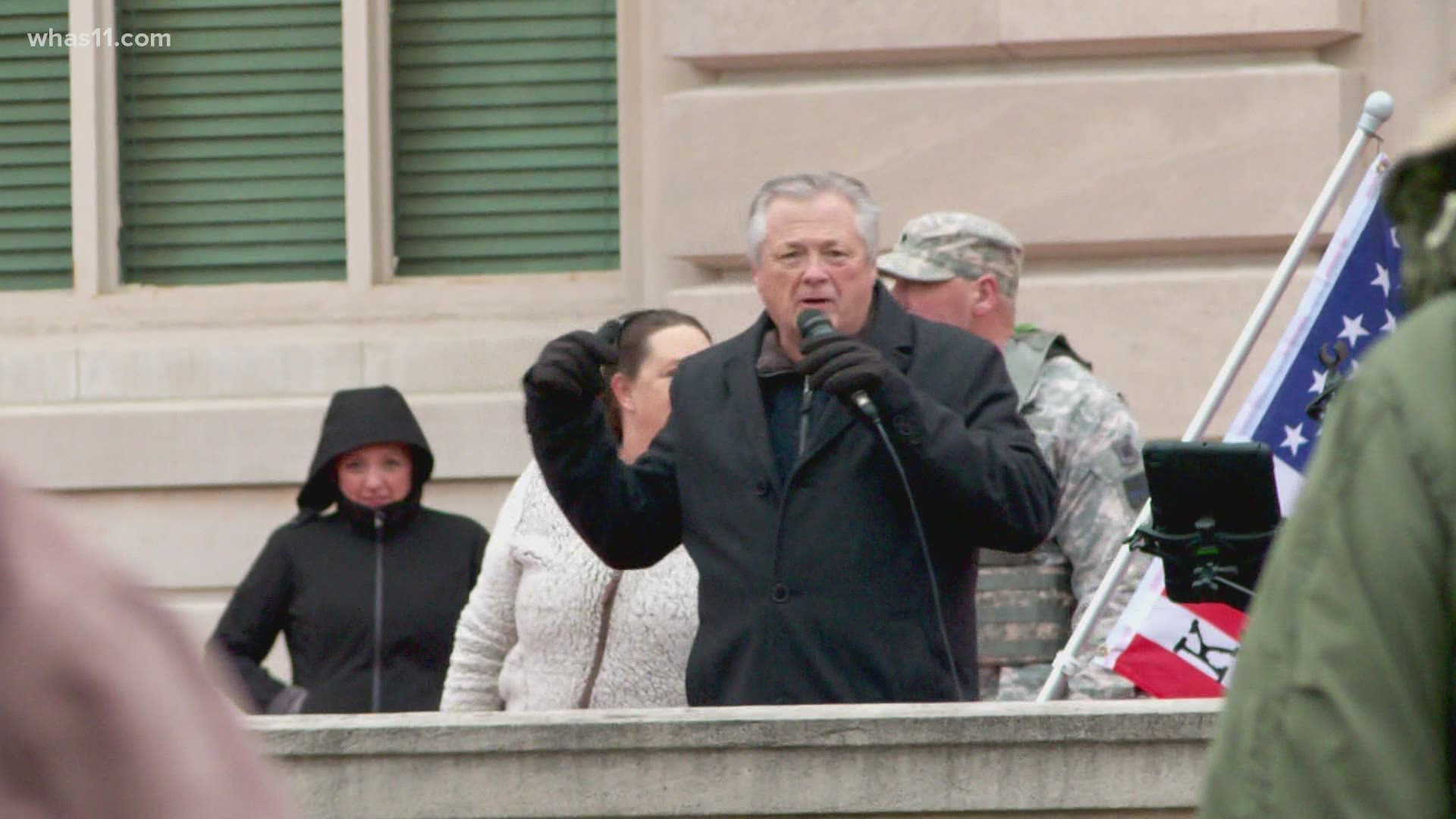 FRANKFORT, Ky. — Days after the U.S. Capitol was stormed with violent riots, protesters gathered outside of the Kentucky Capitol for a "patriots" rally.

"Storming a Capitol, storming this Capitol. That doesn't do any good," Tony Wheatley said.

Wheatley, of Mercer County, said he's with a group called "Constitutional Kentucky" and was part of the effort to organize Saturday's rally, which also included several militia groups. Wheatley said the rally wasn't about a show of force.

"Today, we're here just to let our Capitol know and our legislators know they are in there working for us," he said.

While both chambers of the General Assembly were in session on a Saturday, many of the rally's speakers were calling for Governor Andy Beshear's impeachment.

"He's done things that just don't add up to normal business. If I was a CEO of a company and I did that, I'd lose my job," Wheatley said.

Wheatley is one of four Kentucky residents who formally filed a petition with the House Clerk's office Friday calling for the governor's impeachment.

The filing claims the governor violated Kentuckians' First Amendment rights and eight violations against at least 10 sections of Kentucky's constitution through his pandemic-related actions and emergency executive orders.

The filing claims Beshear "violated the rights of millions of Kentuckians, by depriving them of 'the right of enjoying and defending their lives and liberties', 'the right of worshipping Almighty God according to the dictates of their conscience', 'the right of seeking and pursuing their safety and happiness', 'the right of freely communicating their thoughts and opinions'...'and the right of assembling together in a peaceable manner for their common good' by imposing lockdown orders."

"It is not unusual. It is my understand that every session we get those types of things and they get sent to a committee and don't see the light of day," House Minority leader Joni Jenkins, (D-44) said Saturday.

"We have to take it seriously. This is a serious issue regardless of whether anything comes of it or not," House Speaker David Osborne, (R-59), said. "For someone to propose undoing an election of a state executive, it's only happened four times in the history of the Commonwealth of Kentucky."

Speaker Osborne said Kentucky law requires the House to form a committee after petitions are filed.

"We will set up a committee just like we did last year when there was an impeachment resolution filed against a judge in northern Kentucky," Osborne said. "It doesn't even require a vote or anything, it just requires that the committee act and the committees action could be to do nothing."

At least 50 others, including several Louisville residents, also signed affidavits that are included in the petition. The affidavits claim Beshear has "abused executive powers, has acted arbitrarily and with malfeasance, has perpetrated a fraud upon the people of Kentucky...and much more."

Those who've signed claim Beshear's actions have "risen to a level of impeachable conduct."

"We recognize that an impeachment is probably not going to happen," Wheatley said. "We just want to get the point across for the American people and the people of Kentucky, there are more things you can do than storm the Capitol. We want to make sure were taking every legal ramifications- outlets that we can get to do what's right."

The governor's office did not return request for comment on the petition Saturday. Beshear did tweet in response to the rally, writing, "Three days after domestic terrorists attacked our U.S. Capitol, there was a militia rally in Frankfort...We will not be intimidated. We will not be bullied. America is counting on the real patriots. Those who condemn hate and terror when they see it."