The NCAA has been accused the past two weeks of not providing equal amenities to the teams in the men’s and women’s Division I basketball tournaments. 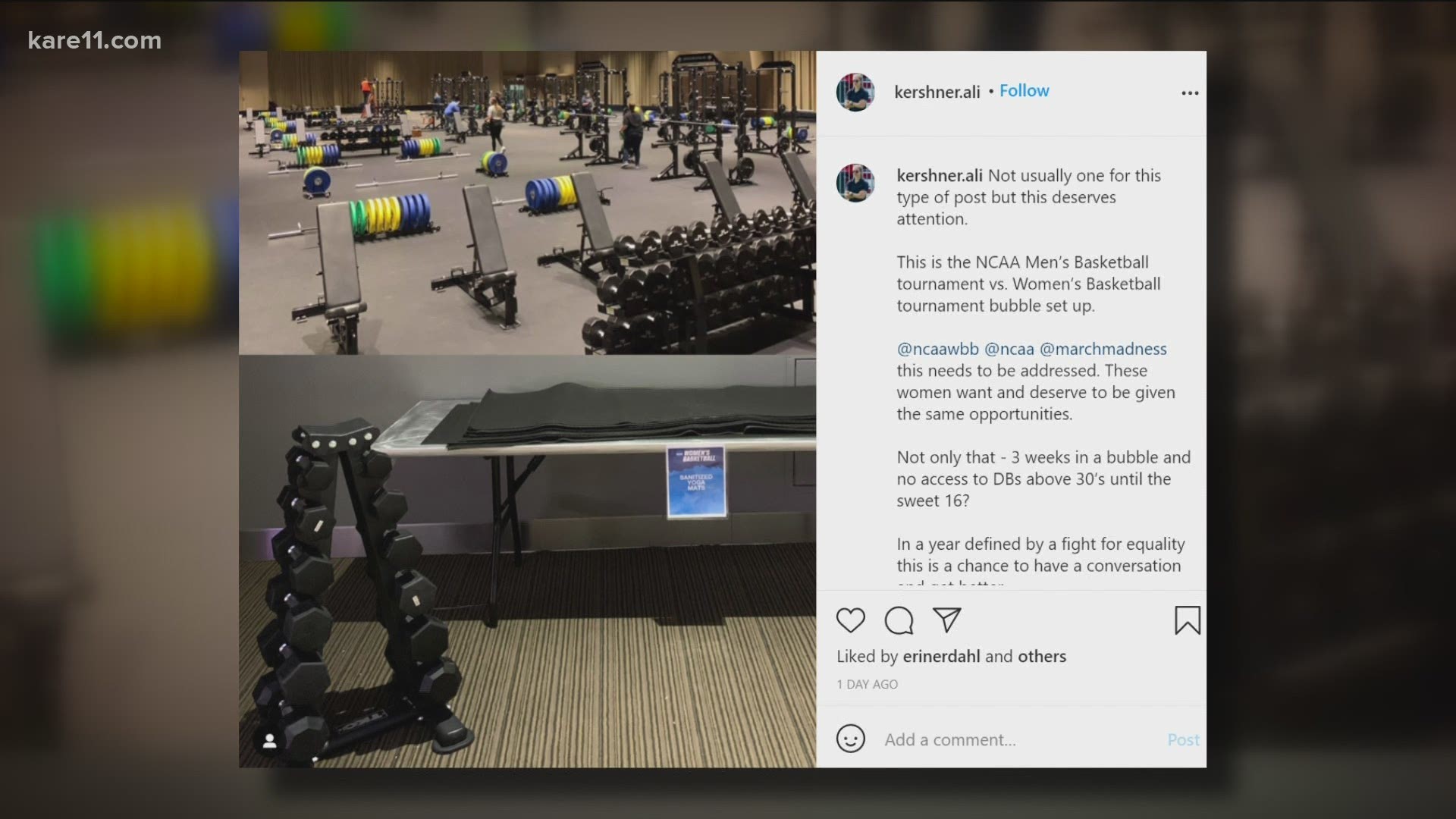 SAN ANTONIO — Mark Emmert acknowledged the glaring failures to give the coaches and players in the women's tournament the same attention the NCAA gave the men was a result of a lack of communication between the two basketball staffs along with focusing on trying to tip off both events safely during a pandemic.

The NCAA president said the oversights resulted in overlooking differences that led to inequities that have cast a dark, looming cloud over the women's tournament.

"The emphasis that needed to be on health and wellness and the complete and utter focus on how to pull this off in a pandemic led us to get our eye off the ball on a handful of things and that's really unfortunate. Had we done that better we wouldn't have had these things emerge.”

The NCAA announced on Thursday that it was hiring a law firm to review potential gender equity issues in all men’s and women’s championship events.

“We can't just say we're in favor or everything being equivalent and fair, we've got to make sure that's actually the case across the board,” Emmert said.

The NCAA has been accused the past two weeks of not providing equal amenities to the teams in the men’s and women’s Division I basketball tournaments. Among other things, female players, coaches and staff in San Antonio have criticized the NCAA for not initially providing a full weight-training area to the women’s teams, noting the men’s teams in Indianapolis did not have the same problem.

“We dropped the ball in San Antonio in the women’s basketball tournament,” Emmert said.

He said now the focus is on making sure it doesn't happen again.

The NCAA has also received criticism for using the term March Madness only to promote and brand the men’s tournament. Emmert said the popular nickname could be used for the women's tournament if organizers and those who support the game want it.

“The mark March Madness isn’t exclusively the men’s basketball mark and it wasn’t intended in that context,” he said. “There has been an ongoing discussion about how to build the women’s basketball brand and how much similarity versus how much distinction is appropriate between the two games.”

While the budget to run the men’s NCAA Tournament in 2018-19 was nearly double that of the women, according to a report in the New York Times, Emmert said those numbers were much closer for this year’s tournaments, with both events being held in one geographic area.

“It has changed for this tournament,” he said. “We spent on the women’s side, about another $16 million on COVID related expenses and less than that on the men’s side.”

“We failed to deliver the things they earned and deserved," he said. “Beg them to understand that’s not a reflection of how they are valued and how much we care about their success as athletes and young women.

"It’s been deeply frustrating and disappointing. My staff in San Antonio has been working so unbelievably hard. This should be a moment we’re celebrating the return of college sports. Celebrating our ability to pull off championships in the midst of a pandemic and do it well. Instead we're having this conversation. It's disappointing and frustrating for everybody."

The controversy over the basketball tournament comes as the NCAA is heading toward potentially landscape-changing events for college sports.

The Supreme Court will hear arguments in an antitrust case involving the NCAA next week.

Meanwhile, the NCAA is trying to change its rules to allow athletes to earn money from third parties for things such as endorsements and personal appearances, but name, image and likeness reform has bogged down.

Dozens of states are forcing the issue with bills that will grant college athletes NIL rights. The NCAA is asking federal lawmakers for help, but none are in a rush to bail out the association.

At a time when Emmert is facing pressure to guide the NCAA through a tumultuous time, issues with the basketball tournaments have created yet another problem.

He plans to see it through.

“My timeline has always been as long as I'm successful in contributing to an enterprise in a meaningful way and my bosses are supportive then I like what I do a lot," Emmert said. "Nobody likes being in the middle of this. I love working for the NCAA. I'm very proud of all the things that have happened over the past decade.

"We've had a bunch of challenges to say the least but there's no doubt in my mind the NCAA is moving in a good direction despite all of this and as long as my board is supportive I want to keep doing this job."