The surgery involves implanting a device that acts as a kind of pacemaker for the brain. But some argue the human testing underway is premature. 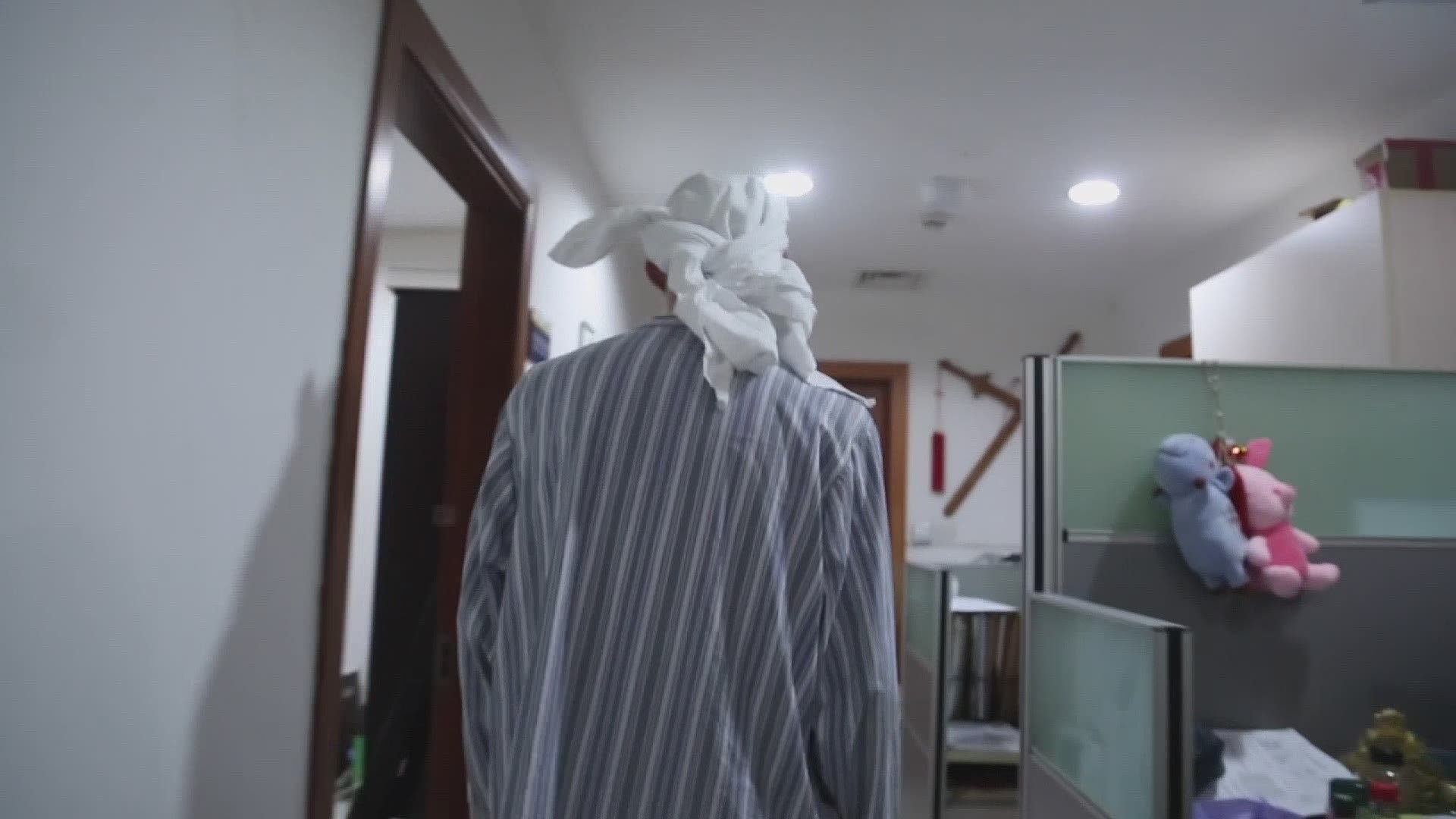 SHANGHAI, China — Patient Number One is a thin man, with a scabby face and bouncy knees. His head, shaved in preparation for surgery, is wrapped in a clean, white cloth.

Years of drug use cost him his wife, his money and his self-respect, before landing him in this drab yellow room at a Shanghai hospital, facing the surgeon who in 72 hours will drill two small holes in his skull and feed electrodes deep into his brain.

The hope is that technology will extinguish his addiction, quite literally, with the flip of a switch.

The treatment — deep brain stimulation — has long been used for movement disorders like Parkinson's. Now, the first clinical trial of DBS for methamphetamine addiction is being conducted at Shanghai's Ruijin Hospital, along with parallel trials for opioid addiction. And this troubled man is the very first patient.

The surgery involves implanting a device that acts as a kind of pacemaker for the brain, electrically stimulating targeted areas. While Western attempts to push forward with human trials of DBS for addiction have foundered, China is emerging as a hub for this research.

Scientists in Europe have struggled to recruit patients for their DBS addiction studies, and complex ethical, social and scientific questions have made it hard to push forward with this kind of work in the United States, where the devices can cost $100,000 to implant.

China has a long, if troubled, history of brain surgery for drug addiction. Even today, China's punitive anti-drug laws can force people into years of compulsory treatment, including "rehabilitation" through labor. It has a large patient population, government funding and ambitious medical device companies ready to pay for DBS research.

There are eight registered DBS clinical trials for drug addiction being conducted in the world, according to a U.S. National Institutes of Health database. Six are in China.

Credit: AP
This Monday, Oct. 29, 2018, photo shows a brain scan of a methamphetamine user with the path of electrodes that doctors at Ruijin Hospital in Shanghai, China implanted to stimulate an area of the brain associated with addiction.

But the suffering wrought by the opioid epidemic may be changing the risk-reward calculus for doctors and regulators in the United States. Now, the experimental surgery Patient Number One is about to undergo is coming to America. In February, the U.S. Food and Drug Administration greenlighted a clinical trial in West Virginia of DBS for opioid addiction.

Patient Number One insisted that only his surname, Yan, be published; he fears losing his job if he is identified.

He said doctors told him the surgery wasn't risky. "But I still get nervous," he said. "It's my first time to go on the operating table."

Three of Yan's friends introduced him to meth in a hotel room shortly after the birth of his son in 2011. They told him: Just do it once, you've had your kid, you won't have problems.

Smoking made Yan feel faint and slightly unhinged. Later, he found meth brought crystalline focus to his mind, which he directed at one thing: Cards. Every time Yan smoked, he gambled. And every time he gambled, he lost — all told, around $150,000 since he started using drugs, he estimated.

His wife divorced him. He rarely saw his son.

Yan checked into a hospital for detox, moved to another town to get away from bad influences, took Chinese traditional medicine. But he relapsed every time. "My willpower is weak," he said.

Last year his father, who had a friend who had undergone DBS surgery at Ruijin, gave him an ultimatum: Back to rehab or brain surgery. "Of course, I chose surgery," Yan said. "With surgery, I definitely have the chance to get my life back."

Credit: AP
Orderlies roll a brain surgery patient out of the functional neurosurgery center at Ruijin Hospital in Shanghai, China on Monday, Oct. 29, 2018.

Before there were brain implants in China there was brain lesioning. Desperate families of heroin users paid thousands of dollars for unproven and risky surgeries in which doctors destroyed small clumps of brain tissue. Brain lesioning quickly became a profit center at some hospitals, but it also left a trail of patients with mood disorders, lost memories and altered sex drives.

In 2004, China's Ministry of Health ordered a halt to brain lesioning for addiction at most hospitals. Nine years later, doctors at a military hospital in Xi'an reported that roughly half of the 1,167 patients who had their brains lesioned stayed off drugs for at least five years.

DBS builds on that history. But unlike lesioning, which irreversibly kills brain cells, the devices allow brain interventions that are — in theory — reversible. The technology has opened a fresh field of human experimentation globally.

"As doctors we always need to think about the patients," said Dr. Sun Bomin, director of Ruijin Hospital's functional neurosurgery department. "They are human beings. You cannot say, 'Oh, we do not have any help, any treatment for you guys.'"

Sun said he has served as a consultant for two Chinese companies that make deep brain stimulators — SceneRay Corp. and Beijing PINS Medical Co. He has tried to turn Ruijin into a center of DBS research, not just for addiction, but also Tourette syndrome, depression and anorexia.

"You can rest assured for the safety of this operation," Yan's surgeon, Dr. Li Dianyou, told him. "It is no problem. When it comes to effectiveness, you are not the first one, nor the last one. You can take it easy because we have done this a lot."

In fact, there are risks. There is a small chance Yan could die of a brain hemorrhage. He could emerge with changes to his personality, seizures, or an infection. And in the end, he may go right back on drugs.

Some critics believe this surgery should not be allowed.

They argue that such human experiments are premature, and will not address the complex biological, social and psychological factors that drive addiction. Scientists don't fully understand how DBS works and there is still debate about where electrodes should be placed to treat addiction. There is also skepticism in the global scientific community about the general quality and ethical rigor — particularly around issues like informed consent — of clinical trials done in China.

"It would be fantastic if there were something where we could flip a switch, but it's probably fanciful at this stage," said Adrian Carter, who heads the neuroscience and society group at Monash University in Melbourne. "There's a lot of risks that go with promoting that idea."

The failure of two large-scale, U.S. clinical trials on DBS for depression around five years ago prompted soul-searching about what threshold of scientific understanding must be met in order to design effective, ethical experiments.

"We've had a reset in the field," said Dr. Nader Pouratian, a neurosurgeon at UCLA who is investigating the use of DBS for chronic pain. He said it's "a perfectly appropriate time" to research DBS for drug addiction, but only "if we can move forward in ethical, well-informed, well-designed studies."

In China, meanwhile, scientists are charging ahead.

At 9 a.m. on a grey October Friday in Shanghai, Dr. Li drilled through Yan's skull and threaded two electrodes down to his nucleus accumbens, a small structure near the base of the forebrain that has been implicated in addiction.

Yan was awake during the surgery. The buzzing of the drill made him tremble.

At 4 p.m. the same day, Yan went under general anesthesia for a second surgery to implant a battery pack in his chest to power the electrodes in his skull.

Credit: AP
White mesh covers the head of a methamphetamine user named Yan on Monday, Oct. 29, 2018, three days after he had a deep brain stimulation device implanted as part of a clinical trial at Ruijin Hospital in Shanghai, China.

According to the U.S. Centers for Disease Control and Prevention, more than 500,000 Americans died of drug overdoses in the decade ending in 2017 — increasingly, from synthetic opioids that come mainly from China, U.S. officials say. That's more than the number of U.S. soldiers who died in World War II and Vietnam combined.

The body count has added urgency to efforts to find new, more effective treatments for addiction. While doctors in the U.S. are interested in using DBS for addiction, work funded by the U.S. National Institutes of Health is still focused on experiments in animals, not people.

At least two U.S. laboratories dropped clinical trials of DBS for treating alcoholism over concerns about study design and preliminary results that didn't seem to justify the risks, investigators who led the studies told The Associated Press.

"The lack of scientific clarity, the important but strict regulatory regime, along with the high cost and risk of surgery make clinical trials of DBS for addiction in the U.S. difficult at the present time," said Dr. Emad Eskandar, the chairman of neurological surgery at Albert Einstein College of Medicine in New York.

China's studies have offered mixed results. Sun and his colleagues have published one case study, describing a patient who used heroin and fatally overdosed three months after getting DBS. But a separate pilot study published in January by doctors at a military hospital in Xi'an showed that five of eight heroin users stayed off drugs for two years after DBS surgery.

Based on those results, SceneRay is seeking Chinese regulatory approval of its DBS device for opioid addiction, and funding a multi-site clinical trial targeting 60 participants. SceneRay chairman Ning Yihua said his application for a clinical trial in the U.S. was blocked by the U.S. Food and Drug Administration.

But in February, the FDA greenlighted a small, separate trial of DBS for opioid use disorder, said Dr. Ali Rezai, who is leading the study at the West Virginia University Rockefeller Neuroscience Institute. They hope to launch the trial in June, with funding from the National Institute on Drug Abuse.

"People are dying," Rezai said. "Their lives are devastated. It's a brain issue. We need to explore all options."

'YOU CAME TOO LATE'

Two unsteady days after Yan's surgery, doctors switched on his DBS device. As the electrodes activated, he felt a surge of excitement. The current running through his body kept him awake; he said he spent the whole night thinking about drugs.

The next day, he sat across from Dr. Li, who used a tablet computer to remotely adjust the machine thrumming inside Yan's head.

"Cheerful?" Li asked as the touched the controls on the tablet.

"Agitated," Yan said. He felt heat in his chest, then a beating sensation, numbness and fatigue. Yan began to sweat.

Li made a few more modifications. "Any feelings now?"

He was in high spirits. "This machine is pretty magical. He adjusts it to make you happy and you're happy, to make you nervous and you're nervous," Yan said. "It controls your happiness, anger, grief and joy."

Yan left the hospital the next morning.

More than six months later, he said he's still off drugs. With sobriety, his skin cleared and he put on 20 pounds. When his friends got back in touch, he refused their drugs. He tried to rekindle his relationship with his ex-wife, but she was pregnant with her new husband's child.

"The only shame is that you came too late," she told him.

Sometimes, in his new life, he touches the hard cable in his neck that leads from the battery pack to the electrodes in his brain. And he wonders: What is the machine doing inside his head?