Julie Ertz and Casey Short shared an emotional embrace while they knelt during the national anthem as the NWSL opened its season. 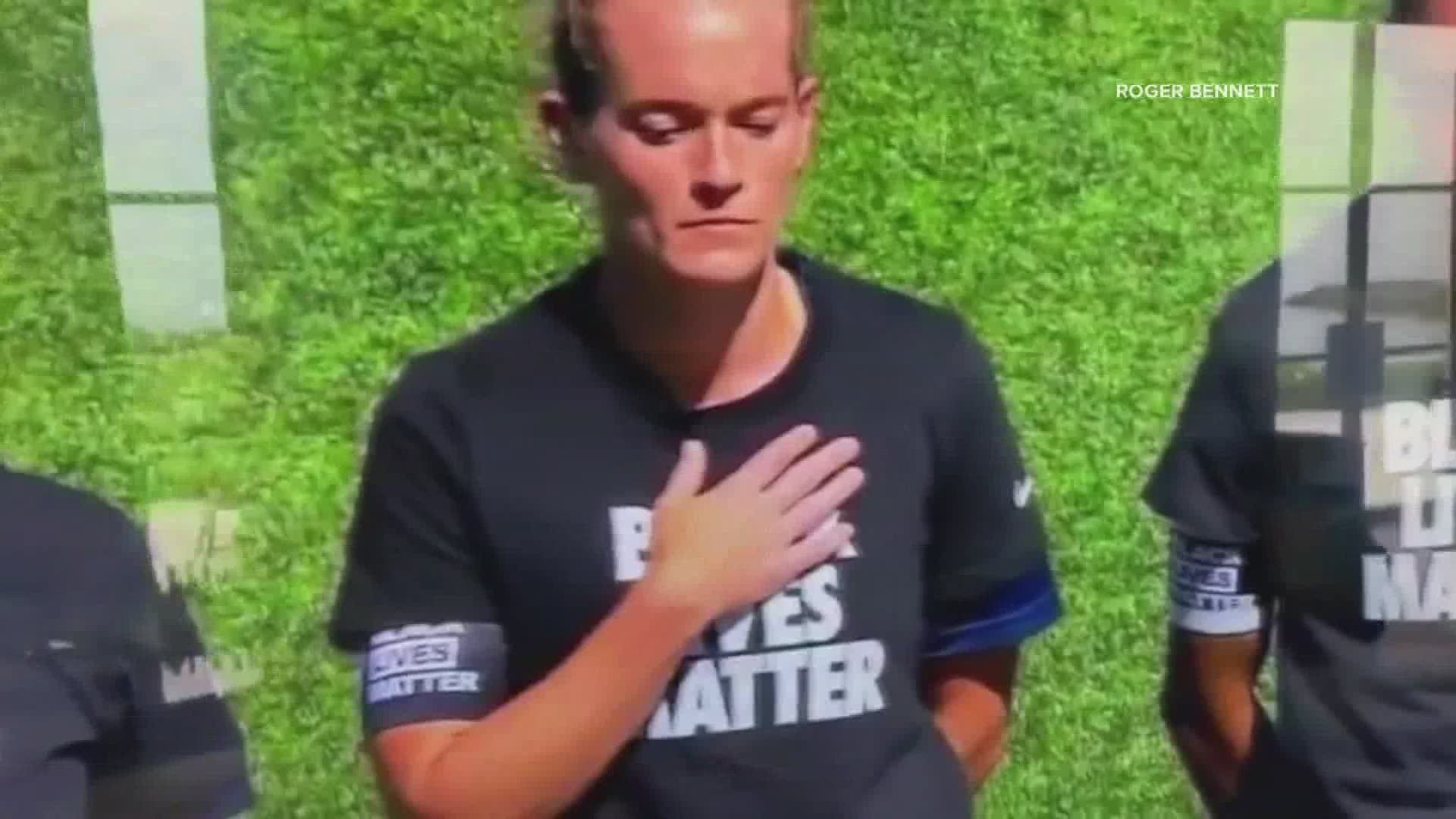 Chicago Red Stars teammates Julie Ertz and Casey Short say hard conversations over the past several weeks led to their vulnerability in the moment they shared an emotional embrace while they knelt during the national anthem as the NWSL opened its season.

Short sobbed as she was held by Ertz before Chicago's match against the Washington Spirit on Saturday night, the second game of the National Women's Soccer League tournament in Utah.

“Currently, every time the national anthem is played, our country continues to become more and more divided on what the visual symbol of unity looks like,” Short and Ertz said in a joint statement they released Tuesday. "Through our continuous conversations we wanted to make sure that whatever we decided to do, it would not be an empty gesture. It would be a gesture that portrayed that we have heard those who needed to be heard, validated and loved.

“That moment during the anthem was difficult, very difficult. We are still searching but we are humbled by the outpouring of support.”

“The two of us have always set out to be our honest and true selves, but have struggled to find the “right” thing to do in order to show our truth. We understand people are entitled to their opinions. Often these opinions are presented through the individual’s lens and do not accurately portray how the two of us truly feel,” Short and Ertz said.

Hill posted a statement to Instagram on Tuesday night, saying the decision did not come easily.

"Before the game, I was completely torn on what to do. I spoke with friends, family and teammates — of all races, religions and backgrounds — with the hope of guidance,” Hill wrote. “I chose to stand because of what the flag inherently means to my military family members and me, but I 100 percent support my peers. Symbolically, I tried to show this with the placement of my hand on Casey's shoulder and bowing my head. I struggled, but felt that these actions showed my truth, and in the end I wanted to remain true to myself.”

Players for the Portland Thorns and the North Carolina Courage collectively knelt during the national anthem Saturday as they opened the Challenge Cup tournament. A few players, including Hill, chose to stand as the anthem was played before the late game between the Red Stars and Spirit.

While it is customary that only starters are on the field during the anthem, the entire squads for the four teams that played Tuesday took the field before their games. Most, but not all, knelt.

Players and coaches have also worn Black Lives Matter T-shirts in warmups before games, and players have also knelt during a moment of silence before kickoffs.

The NWSL players association released a statement in support of all players, no matter their decision.

“The Players Association supports both making a clear statement that Black Lives Matter and each player making a personal decision around whether to stand or kneel during the national anthem,” the union said. “We ask that our supporters and media respect each player’s right to handle these moments in the way that they choose and know that our players are united against racism and in support of one another.”

After some players were criticized, the league announced Monday that it would allow players to remain in the locker room during the anthem.

“The NWSL stands behind every player, official and staff member. Kneel on the field. Stand with your hand over your heart. Honor your feelings in the privacy of the locker room or at midfield,” NWSL Commissioner Lisa Baird said in a statement announcing the policy change. “The NWSL is a league that was built on diversity and courage and those principles will continue to drive us forward.”

The NWSL is the first professional team sports league in the United States to return amid the coronavirus pandemic. The teams had gathered for training camps in March when the league was shut down.

The tournament opener between the Thorns and the Courage was broadcast nationally on CBS and the network announced Tuesday that the game averaged 572,000 viewers, a record for the NWSL.