George Floyd's brother, Philonise, described the White House meeting as "a remembrance of what happened to my brother." 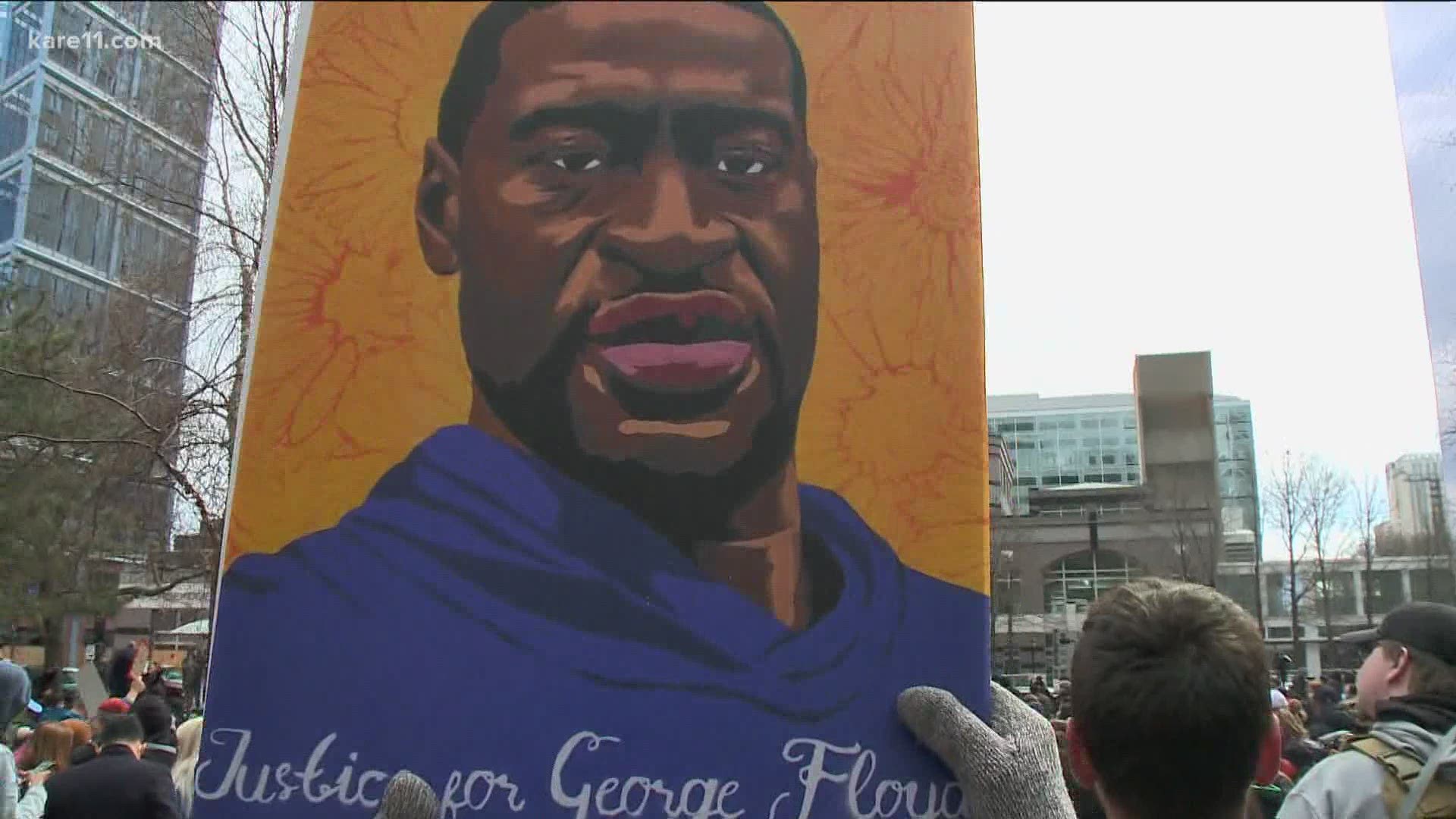 WASHINGTON — The anniversary of George Floyd’s death was supposed to be a milestone moment, a time to mark passage of legislation to “root out systemic racism” in the criminal justice system, in the words of President Joe Biden. Instead, Floyd’s family visited Washington on Tuesday to mourn with Biden and prod Congress to act as they commemorate the loss of their brother, father and son one year ago.

“Today is the day that he set the world in a rage,” Floyd's brother Philonise said, addressing reporters at the Capitol alongside family members, Democratic House Speaker Nancy Pelosi and other lawmakers. “We need to be working together to make sure that people do not live in fear in America any more," he said.

“It was a remembrance of what happened to my brother," Philonise Floyd said. He said of the meeting with Biden, "It was great, he’s a genuine guy.”

Biden told them “he just wants the bill to be meaningful and that it holds George’s legacy intact," said George Floyd's nephew Brandon Williams.

A sister, Bridgett Floyd, stayed away, aiming to come only when there is a bill to be signed into law.

“That’s when I will make my way to D.C.,” she said from Minnesota.

Credit: AP
Philonise Floyd, the brother of George Floyd, talks with reporters with other family members after meeting with President Joe Biden at the White House, Tuesday, May 25, 2021, in Washington. (AP Photo/Evan Vucci)

George Floyd's death sparked a global reckoning over racism and growing calls for police reform, but a legislative response has been elusive. Still, congressional negotiators remain optimistic about the prospects for a bill and they’ve displayed a steady solidarity that’s unusual for such talks, striking a consistently optimistic tone and never publicly sniping at each other.

Credit: AP
House Speaker Nancy Pelosi, D- Calif., speaks to reporters while standing with members of the Floyd family prior to a meeting to mark the anniversary of the death of George Floyd, Tuesday, May 25, 2021 at the Capitol in Washington. (Erin Scott/Pool via AP)

“We hope to bring comfort to your family by passing the final bill very soon,” Pelosi said.

It’s a high-profile legislative fight where Biden has notably taken a back seat, preferring to leave the work of crafting a compromise to lawmakers on Capitol Hill, in contrast to his fevered advocacy, both public and private, for his infrastructure bill and the COVID-19 relief package.

“We have been respecting the space needed for negotiators to have these discussions,” White House press secretary Jen Psaki said.

She and congressional negotiators declined to offer a new deadline for reaching an agreement. California Rep. Karen Bass, the top House Democratic bargainer, said talks would continue “until we get the job done” while the top Republican bargainer, South Carolina Sen. Tim Scott, said separately that negotiations “have a long way to go still but it’s starting to take form.”

The Democratic-controlled House approved a sweeping bill in March that would make it easier for individual police officers to be sued and charged with crimes. It would also ban chokeholds, limit no-knock warrants and create a national database of officers with histories of complaints and disciplinary problems.

That bill has gone nowhere in the Senate, where the 50 Democrats will need support from at least 10 Republicans to overcome a bill-killing filibuster. GOP lawmakers have preferred more modest changes.

While Biden set the anniversary of Floyd’s death as the initial deadline for legislation to reach his desk, the issue of police reform is a particularly politically thorny one. Congressional negotiators have struggled to find a compromise that can make it through an evenly divided Senate.

Ben Crump, the Floyd family’s lawyer, called on Biden to “reiterate that we need to get it passed.”

White House advisers say Biden and his team have been in frequent touch with Capitol Hill negotiators over the legislation, but they believe this is an issue in which a high-profile public campaign by the president may do more harm than good.

But some activists say they’d like to see the president be more outspoken in advocating for the bill.

“President Biden has left it to members of Congress, and it’s in their hands right now. But the president will need to step up to make sure we get it across the finish line,” said Judith Browne Dianis, executive director of the Advancement Project, a racial justice organization.

Still, it's up to Congress, said Wade Henderson, interim president and CEO of The Leadership Conference on Civil and Human Rights, in a statement to the AP.

“It’s absolutely vital that members of Congress put partisan politics aside and pass meaningful reform to hold police officers responsible who act outside of their oath to protect and defend,” he said.

Credit: AP
Philonise Floyd, George Floyd's brother, looks down at Gianna Floyd, George Floyd's daughter, while while standing with members of the Floyd family prior to a meeting to mark the anniversary of the death of George Floyd with House Speaker Nancy Pelosi, D-Calif., Tuesday, May 25, 2021 at the Capitol in Washington. (Erin Scott/Pool via AP)

Floyd died on May 25, 2020 after former Minneapolis police officer Derek Chauvin kneeled on his neck for more than nine minutes, while Floyd repeatedly said he couldn’t breathe. His death sparked months of nationwide protests focused on racism and a renewed debate over police reform in the U.S. Chauvin was convicted last month on multiple charges stemming from Floyd’s death.

While progressives and many criminal justice reform advocates are insistent that the bill eliminate protections for individual officers, some Democrats, most notably House Majority Whip Jim Clyburn of South Carolina and Senate Democratic Whip Dick Durbin of Illinois have said they could see a compromise on the issue. Senate Minority Leader Mitch McConnell, R-Ky., has said he wouldn’t support any bill that ends qualified immunity.

"Today, in the Oval Office, I met with George Floyd’s family.

Although it has been one year since their beloved brother and father was murdered, for the family – for any family experiencing a profound loss – the first year can still feel like they got the news a few seconds ago. And they’ve had to relive that pain and grief each and every time those horrific 9 minutes and 29 seconds have been replayed.

Yet the Floyd family has shown extraordinary courage, especially his young daughter Gianna, who I met again today. The day before her father’s funeral a year ago, Jill and I met the family and she told me, “Daddy changed the world.”

His murder launched a summer of protest we hadn’t seen since the Civil Rights era in the ‘60s – protests that peacefully unified people of every race and generation to collectively say enough of the senseless killings.

Last month’s conviction of the police officer who murdered George was another important step forward toward justice. But our progress can’t stop there.

To deliver real change, we must have accountability when law enforcement officers violate their oaths, and we need to build lasting trust between the vast majority of the men and women who wear the badge honorably and the communities they are sworn to serve and protect. We can and must have both accountability and trust and in our justice system.

The negotiations on the George Floyd Justice in Policing Act in Congress are ongoing. I have strongly supported the legislation that passed the House, and I appreciate the good-faith efforts from Democrats and Republicans to pass a meaningful bill out of the Senate. It’s my hope they will get a bill to my desk quickly.

We have to act. We face an inflection point. The battle for the soul of America has been a constant push and pull between the American ideal that we’re all created equal and the harsh reality that racism has long torn us apart.

At our best, the American ideal wins out.

"Today the President and I met with the family of Mr. George Floyd. Mr. Floyd should be alive today. He should be with his family who continue to show courage, grace, and resilience.

One year ago, a cellphone video revealed to the country what Black Americans have known to be true for generations. The verdict finding Derek Chauvin guilty of murder provided some measure of justice. But one verdict does not address the persistent issue of police misconduct and use of excessive force. It does not take away the Floyd family’s pain, nor the pain of all those families who have grieved the untimely loss of a loved one.

We need to do more.

After Mr. Floyd was murdered, Senator Cory Booker, Representative Karen Bass, and I introduced the Justice in Policing Act to hold law enforcement accountable and build trust between law enforcement and the communities it serves. Congress must move swiftly and act with a sense of urgency. Passing legislation will not bring back those lives lost, but it will represent much needed progress.

We must address racial injustice wherever it exists. That is the work ahead."