Obama, eulogizing John Lewis, says he'll be a 'founding father' of the better America to come 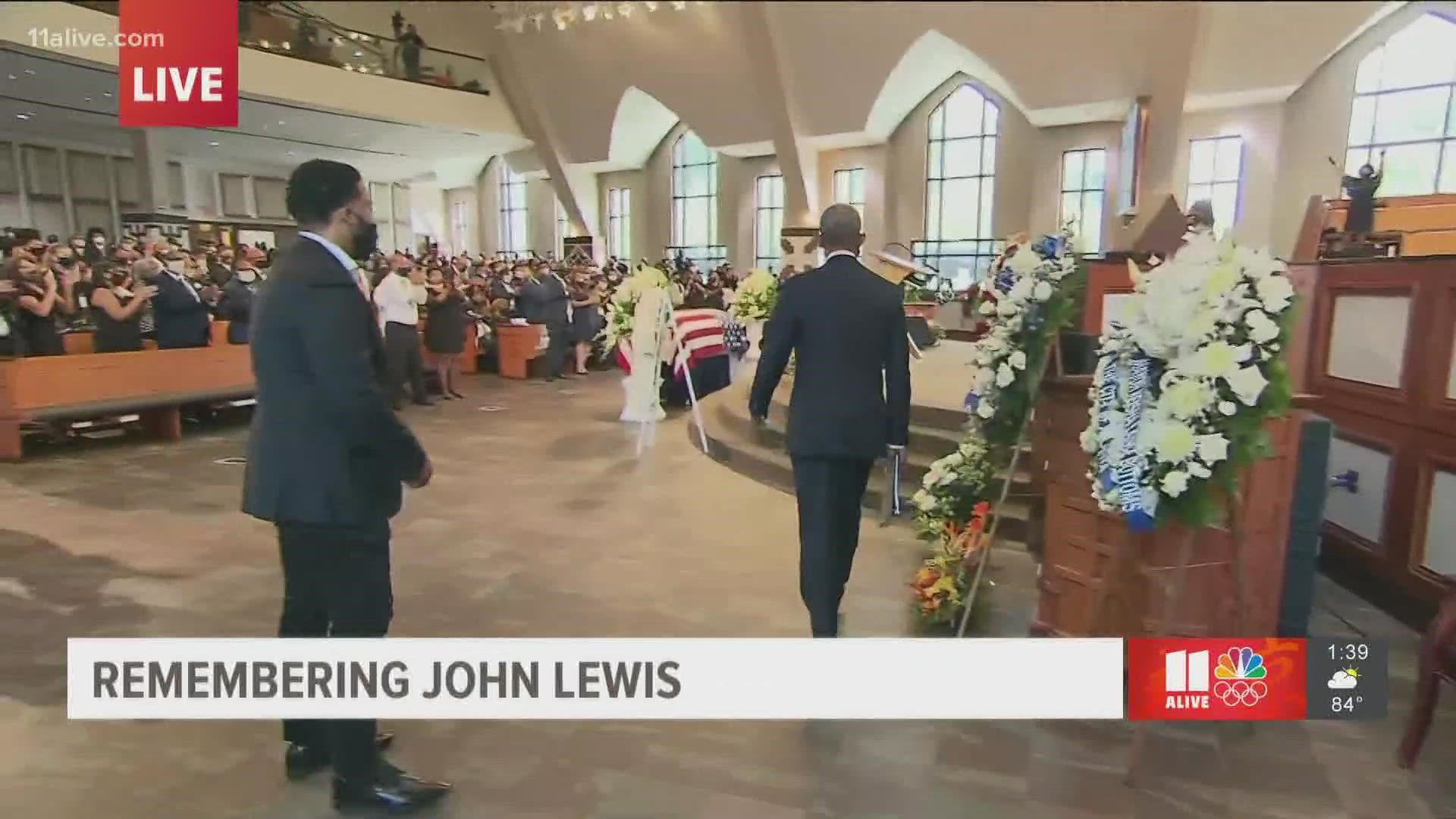 ATLANTA — Evoking an America that someday may finally form the more perfect union envisioned in the nation's Constitution, former President Barack Obama said if and when that dream is realized it will be because of people like John Lewis.

"He has as much as anyone in our history brought this country a little bit closer to our highest ideals," Obama said from the pulpit of the Ebenezer Baptist Church. "And someday when we do finish that long journey towards freedom, when we do form a more perfect union, whether it's years from now or decades or even if it takes centuries, John Lewis will be a founding father of that fuller, fairer, better America."

The 44th president spoke at length about Lewis' impact - a life of sacrifice, to bring about change, and then service, to see that it was not undone. And Obama spoke of how America is a "work in progress" Lewis fought until his final days to advance.

"We're born with instructions to form a more perfect union. Explicit in those words is the idea that we're imperfect, that what gives each new generation purpose is to take up the unfinished work of the last and carry it further than any might have thought possible," Obama said. "John Lewis, first of the Freedom Riders, head of the Student Nonviolent Coordinating Committee, youngest speaker at the March on Washington, leader of the march from Selma to Montgomery, member of Congress representing the people of this state and this district for 33 years, mentor to young people - including me, at a time. Until his final day on this earth he not only embraced that responsibility, but he made it his life’s work, which isn’t bad for a boy from Troy."

Lewis' faith in America, the nation's first Black president said, came from his own story, as a descendant of enslaved people, a son of sharecroppers, who rose to become one of the most influential people in the nation, one of its history's most significant figures.

And part of what made Lewis special, he elaborated, was that he did not see that story as exceptional.

RELATED: As he was dying, John Lewis wrote this final message to America

The former president continued that to do right by Lewis' legacy, we must be vigilant in defending the rights he fought for.

"He knew that every single one of us has a God-given power, and that the fate  of this democracy depends on how we use it," he said. "That democracy isn’t automatic, it has to be nurtured, it has to be tended to. We have to work at it, it's hard. And so he knew that it depends on whether we summon a measure, just a measure, of John's moral courage to question what's right and what's wrong and call things as they are."

In particular the former president said we must protect voting rights - a right Lewis was instrumental in solidifying through his influence in getting the 1965 Voting Rights Act passed - by automatically registering every American to vote, including disenfranchised inmates, by making Election Day a national holiday, by extending representation in Congress to citizens in Washington, D.C. and Puerto Rico, and by ending the filibuster if it's necessary to do those things.

Obama also presented the challenges America still faces in rooting out the racism Lewis made it his mission to defeat, referencing how Black Americans still face repression from their government in a multitude of ways.

"He knew that the march is not over, that the race is not yet won, that we have not yet reached that blessed destination where we are judged by the content of our character," he said. "He knew from his own life that progress is fragile, that we have to be vigilant against the darker currents of this country’s history, of our own history, that there are whirlpools of violence and hatred and despair and it can always rise again. Bull Connor may be gone, but today we witness with own eyes police officers kneeling on the necks of Black Americans. George Wallace may be gone, but we can witness our federal government sending agents to use tear gas and batons against peaceful demonstrators."

The former president concluded by sharing the optimism he said Lewis saw in the Black Lives Matter movement, the nationwide protests against systemic racism which have evoked the Civil Rights Movement that Lewis was so central to.

"'By the thousands, faceless anonymous, relentless young people, Black and white, have taken our whole nation back to those great wells of democracy which were dug deep by the founding fathers in the formulation of the Constitution and the Declaration of Independence.' Dr. King said that in the 1960s, and it came true again this summer," Obama said. "And you see it outside our windows in big cities and rural towns, men and women, young and old, straight Americans and LGBTQ American, Blacks who long for equal treatment and whites who can no longer accept freedom for themselves while witnessing the subjugation of their fellow Americans.

Obama added: "What a gift John Lewis was."