John Goodman said his wife was unable to understand why the pandemic kept him from visiting, so he found a way to return to her side 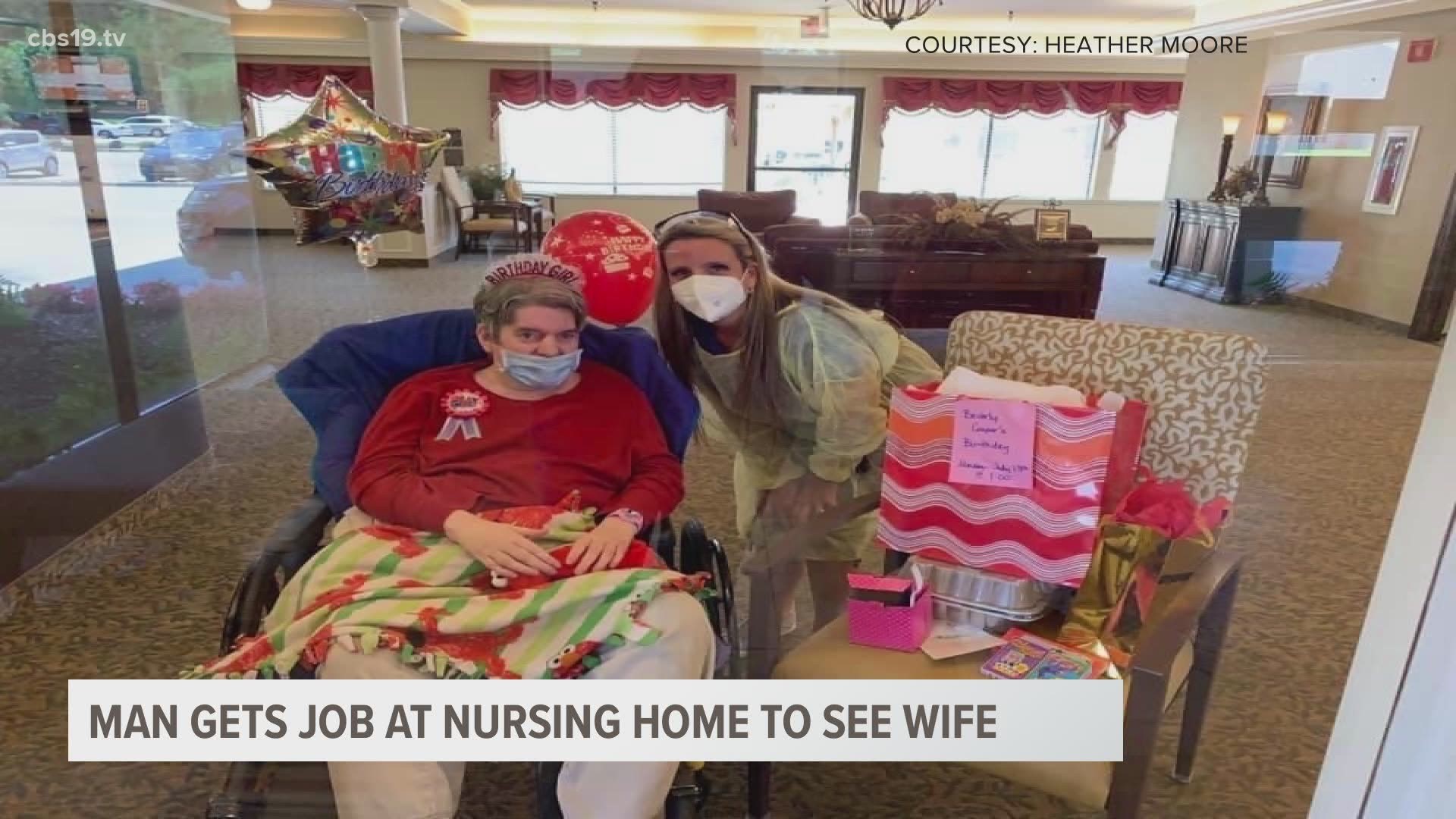 TYLER, Texas — The coronavirus pandemic has affected all of us in one way or another, but some people have felt its impact more than others.

For families with a loved one in nursing homes, not being able to see each other has caused anxiety and health problems.

John Goodman felt that acutely. “Before this COVID thing came along, I was able to be with her almost every day in her room,” he said.

John and his wife, Patsy, have been married 27 years. She was a surgical nurse, and after 16 years with CHRISTUS Trinity Mother Frances, she became a traveling nurse, taking contracts all over the country. The two of them and her daughter from a previous relationship spent time anywhere and everywhere.

“It was an interesting life,” he recalled. “Very, very rewarding.”

Patsy moved into Providence Park Rehabilitation & Skilled Nursing in October 2018 due to a series of strokes and heart attacks meant she needed specialized care. John was able to spend much of his time with her until March, when the arrival of the virus led Governor Greg Abbott to prohibit visitors from entering long-term care facilities.

“Because of her condition, she couldn’t understand why I couldn’t be here,” John said. “In other words, she felt abandoned, I’m sure.”

John says he tried a variety of ways to talk to Patsy, including standing on the other side of her bedroom window, but none lifted her spirits. After a couple months, he knew he needed to find a way near her so that her anxiety would not derail her physical recovery.

“I came up here and suggested that maybe I could volunteer in the laundry or something,” he said. “Maybe there was something I could do in order that I would be approved to be inside so that I could see her from time to time, reassure her that everything was okay, that she had not been abandoned, and maybe help with her, you know, restoring her health.

“Well, about a week ago, when I came to the door, the executive director [Heather Moore], said, ‘are you serious about working here?’ And I said, ‘I sure am.' So she handed me an application and I filled it out, and did all the testing and all that sort of thing, and they said, ‘well, maybe you could be a receptionist.’”

After two months of asking, John finally got hired last week. However, manning the front desk is not his only job.

“It was really life-changing to be able to get back here and be with her, and be able to begin to reassure her that everything was okay and that she was going to get better,” he mentioned.

John says he has noticed a subtle improvement in Patsy’s mindset these last few days, but given her physical condition, he would not have expected more.

The Texas Health and Human Services Commission announced last week that visitors would be allowed back into some long-term care facilities. Most have yet to schedule visits because they are awaiting further guidance about how the visits should be arranged. John says other families should also limit their expectations for the first time back and not try to make up for five months of isolation at once.

“I’m sure they’ll see some changes in their loved ones,” he said. “But if they just take it easy, don’t try to push anything real hard, I think it’ll be great.”

John knows because he pushed just hard enough for this opportunity.