The man who massacred nine people at a Charleston church heard from the relatives of his victims, in a mix of anger and love that included calls for him to repent and for him to "rot in hell." 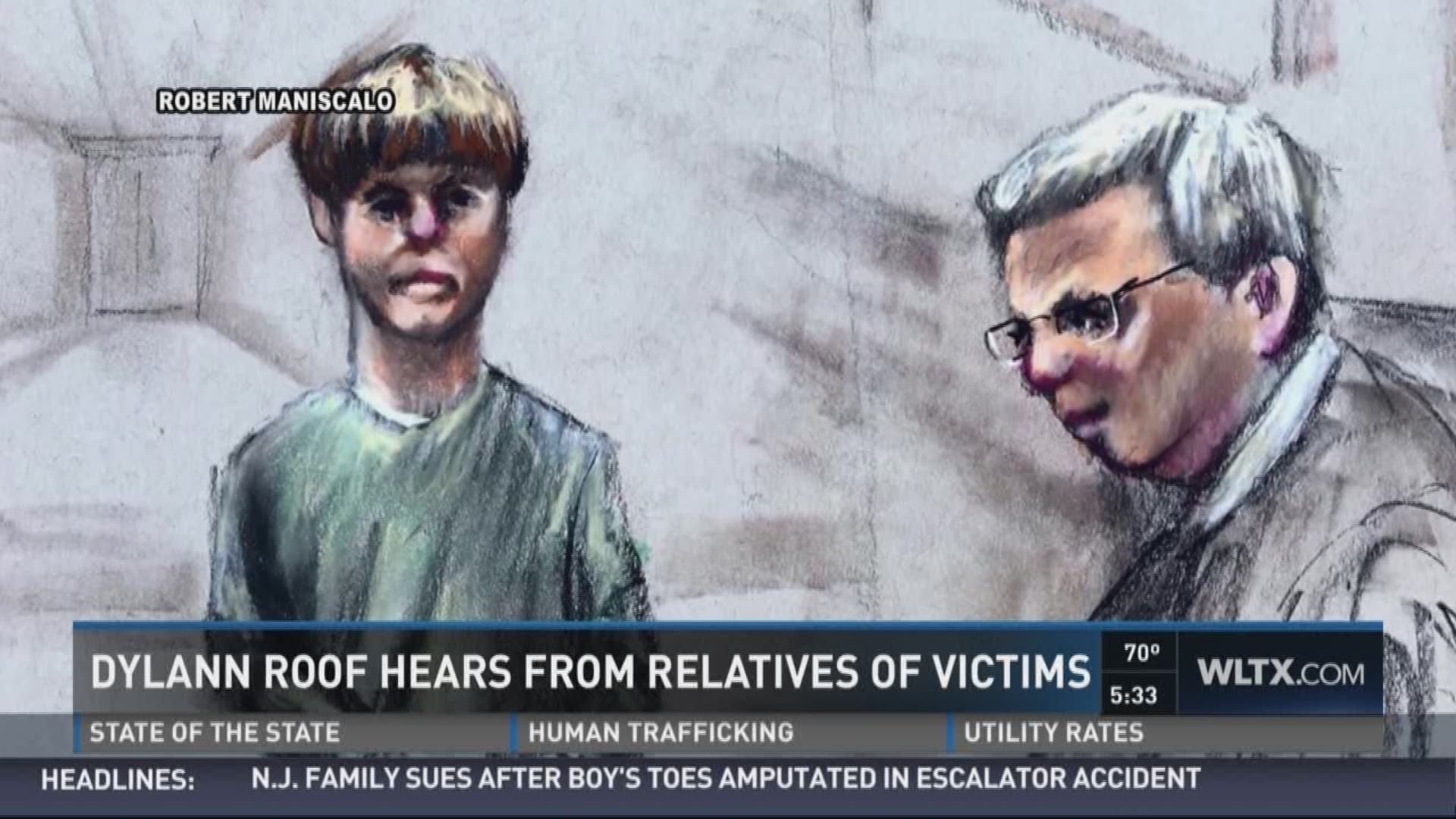 Charleston, SC (WLTX) - The white supremacist who massacred nine black people at a Charleston church heard from the relatives of his victims in a mix of anger, grief, and love that included calls for him to repent, and others for him to "rot in hell."

The relatives were allowed to address Dylann Roof Wednesday in federal court, a day after a jury sentence him to death for the slayings that took place at Mother Emanuel AME Church in June of 2015. After the relatives spoke, Judge Richard Gergel formally accepted with the death sentence, making it official for the record.

One-by-one, the relatives took the stand, speaking directly to the killer. Roof, however, refused to look up, even when asked directly--in some cases, with them shouting at him--by some of the relatives.

"I wish you would look at me boy, but I know you hear me," said Janet Terry Scott, the aunt of Tywanza Sanders. "May the Lord have mercy on your soul."

"He's not listening to a thing we're saying," said Eartha Brown, another of Tywanza Sanders aunts. She's also the sister of Felicia Sanders, one of the three survivors of the attack.

Brown said since the tragedy, she finds it difficult to even be in the house of worship where the attack took place.

"It really hurts," she told Roof. "I can't go downstairs in that basement. I can't do it. I can't walk over memories."

Felicia Sanders had her chance to speak too. Roof took her son, Tywanza, and her aunt, Susie Jackson.

She says she can no longer shut her eyes to pray (Roof began shooting the victims while they had closed their eyes that night), but decided to keep the Bible she was clutching that night. The book is still stained with blood.

"I wanted my Bible," she said. When I look at it the words remain the same."

The testimony was emotional, with meaning fighting back tears. Others couldn't contain their anger either.

"You are Satan himself," said Gracyn Doctor, the daughter of DePayne Middleton-Doctor. "You will rot in hell where you belong."

"How dare you sit here every day looking dumb-faced acting like you did nothing wrong," said Ashland Temoney, Middleton-Doctor's niece. "Many times I wanted to wipe that smile off your face myself....You are the biggest coward I have ever seen in my life."

"God is still working on me," she added.

"I pray your soul goes to hell," said Eleanor Jackson, the daughter-in-law of Susie Jackson.

But others wanted to express forgiveness, and their own struggles to get past the tragedy.

Dan Simmons Jr., the son of Rev. Daniel Simmons Sr., told Roof, "as I forgive you, you are just a body being used, the even that possesses you," Simmons told Roof. "Know that God will forgive you, know that you can change your life."

Alana Simmons, Simmons' granddaugher, said she wanted Roof to know that her family had chose to respond to his hate with love.

"My grandfather's strength, even in his passing, is bringing a community of people together," she said. "I've been working tirelessly to convey that hate doesn't win, love conquers all."

"I really wanted you to know, you don't have the power to control anything on this side of the courtroom," she said about Roof's desire to spread a message of hate. "I wanted you to know that the message was not received."

Bethane Middlleton-Brown, the sister of Middleton-Doctor, "I wanted to hate you but my faith tells me no," she said. "To God be the glory because there's nothing you can do to harm me or help yourself except repentance."

"I don't have the capacity to hate," said Melvin Graham Jr., the brother of Cynthia Hurd. "The hatred that you possess is beyond human comprehension...I'm gonig to show you what love is. Instead of starting a race war, you started a love war."

The judge denied a motion by Roof for a new trial and new counsel. The defense will have 30 days to file post-trial motions.