Why is voter turnout so low for the Kentucky primary?

The 2019 Kentucky primary is expected to have a 12.5% voter turnout, and the fact that it's a closed primary doesn't help. So, why do we bother? 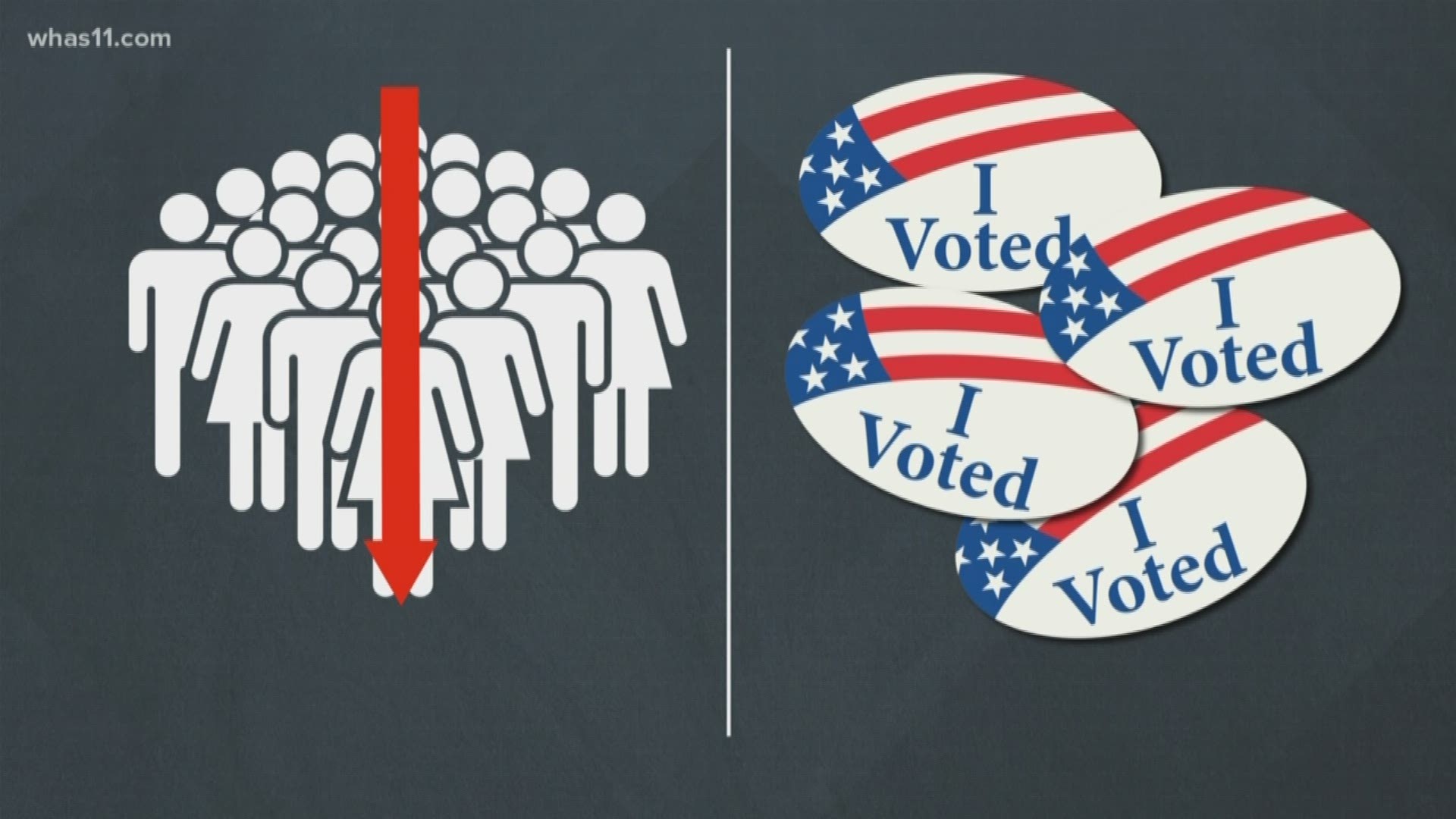 LOUISVILLE, Ky. — Tuesday is the Kentucky primary election. If that’s news to you, sorry—you don’t get to participate. You had to register back in April in order to vote.

Still, whether you’re casting a ballot or not, it does still impact you. So, we want to do a quick breakdown of the Kentucky primary system, and how it works.

Kentucky is one of just 9 states to have a completely closed primary, meaning you can only vote if you are registered with one of the political parties in the election. Essentially, it means you have to be registered as a Republican or registered as a Democrat.

In an open primary, you would be able to vote for whichever candidate you wanted, regardless of party. A downside to having a closed primary is that fewer people end up voting—and we have low voter turnout as it is. The flipside, though, is that the people who do end up casting ballots tend to be the active, passionate, and loyal party voters, which gives them more say in the candidate they will back in the general election. Open primaries even enable something called “raiding” the other party, wherein voters from one party vote for a candidate in the opposing party that they think will be less likely to win in the general election.

“One of the benefits of having a closed primary is that you’re trying to shore up support for your particular party,” said Dr. Dewey Clayton, a professor of political science at the University of Louisville. “You’re going to find out who the faithful are, who your loyal are, and chances are those individuals will be motivated not just to vote in the primary but will also come out and vote in the general election as well.”

Now, let’s take a look at the broader question: why do we have primaries at all? After all, George Washington himself told us not to let our politics be swallowed up by political parties. And that’s what a primary is, by definition.

The fact of the matter, though, is that we do have a party system in the United States today, whether we like it or not. Given that, a primary system is actually the most democratic way to go about things. It used to be that just a few men—and yes, we do mean men, as in males—ended up deciding for everyone who would get the chance to run for each party.

“Originally you had party bosses who were making the determination as to who the candidate/nominee would be,” said Dr. Clayton. “So the primary process is clearly much more democratic than it was in the old days when it was just a group of party bosses in a smoke-filled back room that made those decisions.”

Now, one more thing we need to chat about. We mentioned that voter turnout is low. And, we weren’t kidding. The Kentucky Secretary of State’s office projects just 12.5% voter turnout in Kentucky on Tuesday. Compare that to places like western Europe where they will see an average of over 70% in an election.

A lot of factors play into how low our turnout is. We have a closed primary, in an odd-year election, amid many other elections. The voter burnout is REAL.

Dr. Clayton says there are a lot of different options being tossed around to increase voter turnout; but he—and a lot of other political scientists—want to see voter turnout increase in the United States one way or another. After all, that’s how we keep government officials accountable and reflective of the people they represent.

“I think it’s bad for democracy, and if you look at the primaries here in Kentucky they are extremely low,” Dr. Clayton said. “When it gets to be low like that you have to really wonder if the people’s voice is really being heard.”