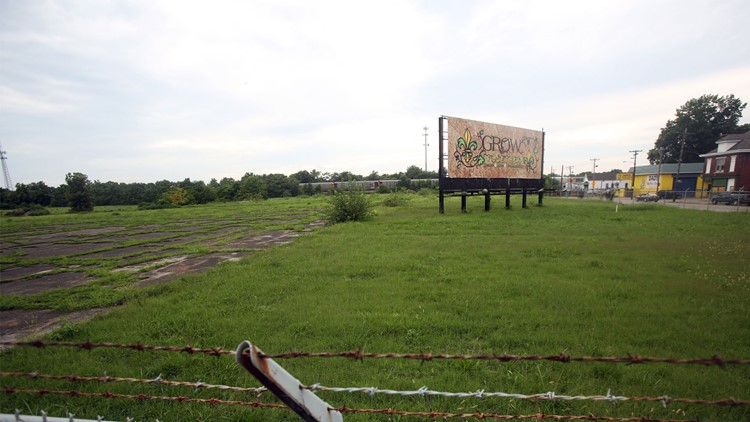 The developer of the West Louisville FoodPort abruptly canceled the $35 million project Wednesday, shelving the celebrated local food project that has been a cornerstone of Mayor Greg Fischer’s redevelopment strategy in the West End.

Two years in the making, the project’s financial plan fell apart upon the withdrawal earlier this month of a crucial financial anchor, the $23 million indoor vertical farm proposed for the 24-acre complex at 30th Street and Muhammad Ali Boulevard.

“We don’t have a way to put it together,” Seed Capital co-founder Stephen Reily said. “We are deeply disappointed.”

Three weeks ago, Reily said, FarmedHere, a vertical farm company based in Chicago, informed Seed Capital that it would not be able to commit as expected to breaking ground at the FoodPort, due to internal financial issues.

FarmedHere had pledged to begin construction next summer on a 60,000-square-foot facility to cultivate basil, micro greens and other crops for wholesale.

FarmedHere's withdrawal is the second setback for the FoodPort project, which had initially counted on a methane plant that was spiked last year under heavy community opposition. Since then, city officials and Seed Capital have sought to downsize the project and attract new tenants.

"As far as the city knew, they were interested to see if we could sign another tenant to go into the FarmedHere space in the short term. That is what they have been working on," Seed Capital co-founder Caroline Heine said.

The city recently proposed using a $7 million federal loan from the U.S. Department of Housing and Urban Development for the project. As it became clear the balance sheet, without major tenants, could not guarantee loan repayments, Reily informed Mayor Fischer Wednesday afternoon the project was kaput.

"It he wanted to keep going and there was a feasible solution, he would have done that," Fischer said Wednesday night. "There's nobody like Stephen Reily who have tried to take on a project of this magnitude."

"There were certain parts of the community that could see the vision... and there were other people who disagreed or couldn't believe there was such a thing as a nonprofit developer trying to do a really good thing for the city." he added. "This was a transformational project. We really tried to involve the community. I hope we can explore other uses for the property."

City councilwoman Cheri Bryant Hamilton, a longtime champion of the FoodPort in her Russell neighborhood district, said she was "heartbroken."

Heine and Reily, she said, "are people who live here, who love this city. I want to see somebody else step forward with their money, their time and their energy and make it happen."

"People who live in the neighborhoods have helped shape this project," Bryant Hamilton said of a 150-member community council that shaped a "community benefits agreement" guaranteeing investment in training, jobs and public services. "I hope they will stay involved and committed to seeing this site transformed into something positive with long lasting impact for the west Louisville community."

The project's shutdown came suddenly amid questions over the city's effort to seek the HUD loan money, which has been available since 1995 to create businesses and jobs in western Louisville. For most of this week, the Fischer administration and Seed Capital made assurances that proceeds from the project would be enough to cover the debt service on the HUD loan. In an Aug. 8 email, Heine said the FoodPort's financial projections “indicate that the project will be able to cover all of its debt service starting the first year of operation.”

While city economic development officials scrambled to find other tenants, Heine said Wednesday, "We just weren’t confident that that was going to happen."

The FoodPort was modeled on attracting enough local food companies to invest in the facility, which would have provided processing and distribution of food to meet consumer demand, Reily said Wednesday. "We just weren’t able to come up with a plan that looked like it would be satisfactory to us or the community. It was too scaled back."

Seed Capital stands ready to sell the land at 30th and Market streets back to the city, Reily said. The land was granted to the nonprofit for $1. The 24-acre tract is valued at $1.6 million. They city will take title to the land for $1, Fischer spokesman Chris Poynter said.

Without significant financial support from a major tenant, the FoodPort cannot build, even with commitments to lease by smaller entities such as Piazza Produce and the Jefferson County Agricultural Extension Office, an educational branch of the University of Kentucky.

FarmedHere was expected to hire 40 people, giving priority to veterans and “second chance” employees. The FoodPort also would have received $400,000 in state tax incentives, which were approved in January by the Kentucky Economic Development Finance Authority.

“We’ve got to call it off right now,” Reily said. “The local food economy is not in a place where we can move forward.”

Described as a “public charity” on its website, the FoodPort was to be financed with loans, grants and proceeds from the sale of New Market tax credits. The project drew local, state and federal support, in addition to philanthropic grant funding, according to the FoodPort’s website.

OMA, an internationally acclaimed architecture firm, was going to create a zig-zag design of glass and steel-clad metal buildings. While concentrating on wholesale processing and distribution, the design envisioned small retail outlets as well as public gardens and event space.

Some $2.7 million had been invested in the project as of last spring, when the Fischer administration signed a development deal with Seed Capital.

Below is a statement from Stephen Reily with the FoodPort:

"We’re incredibly sad to cancel plans for the West Louisville FoodPort. Without a sufficient tenant base, the project is simply no longer economically viable. As a non-profit developer we have aimed to set a new model for transparency and engagement. We have kept listening to our neighbors, and we are proud to have built a platform for leadership among so many people from Russell, Shawnee and Portland. We are grateful for their willingness to invest time and belief in this project, and hope this experience will help us all support the many responsible development projects West Louisville needs.”

Jere Downs can be reached at (502) 582-4669, JDowns@Courier-Journal.com and Jere Downs on Facebook. Reporter Phillip M. Bailey contributed to this report.