'They're out for blood': Dan Johnson's job in question again

Dan Johnson's attorney said he and Johnson will file an appeal if the panel monitoring Johnson decides to remove him from office. 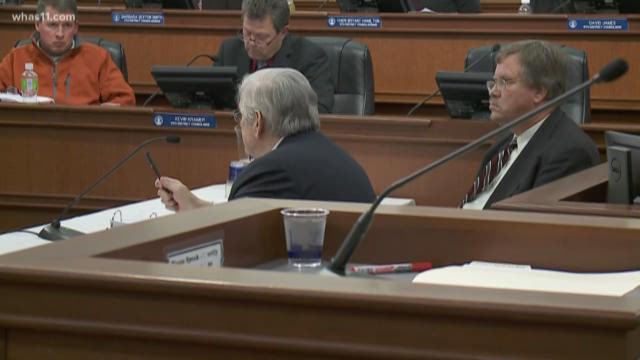 LOUISVILLE, Ky. (WHAS11) – Dan Johnson’s attorney Thomas McAdam says he will fight for the councilman’s seat until the end of his term – even if that means violating an order they both signed last week.

Tuesday, a three-person panel met to discuss two complaints filed against Johnson. Those who filed the complaints claim Johnson has already violated the agreement that kept him on council last week.

McAdam said the first complaint was filed by Angela Leet, accusing Johnson of violating the order just minutes after he signed it.

"After the thing was over we had a brief discussion and then we left. Mister Johnson was waiting for his wife to bring the car around to the back of city hall, he was waiting in the doorway and by his estimate, he was maybe four minutes late leaving. Angela Leet and her stalkers with stopwatches say he was 8 minutes late leaving,” McAdam said.

The order regulates Johnson's time at city hall must be only 20 minutes before and after a council meeting.

Thomas said Bill Hollander filed the second complaint- accusing Johnson of shaming the council with comments he made about the proceedings.

"They're out for blood. There's no question about it. And they're not going to leave him alone- they're going to torment him for the next year and find some way to remove him,” McAdam said.

McAdam said Johnson has followed the rules he signed in the agreement and he and Johnson will fight for Johnson's job.

"There's no problem with taking it to court. We'll get an injunction and he'll stay there another year while the case drags on through court, and it will cost the taxpayers a lot more money and for what?”, McAdam said.

He said if the panel votes to remove Johnson from office, Johnson will file an appeal in circuit court.

The panel plans to meet again on Wednesday afternoon at City Hall.