WHAS11 News revisits the 7-year long project, based in southern Indiana that came with plenty controversy and major costs. 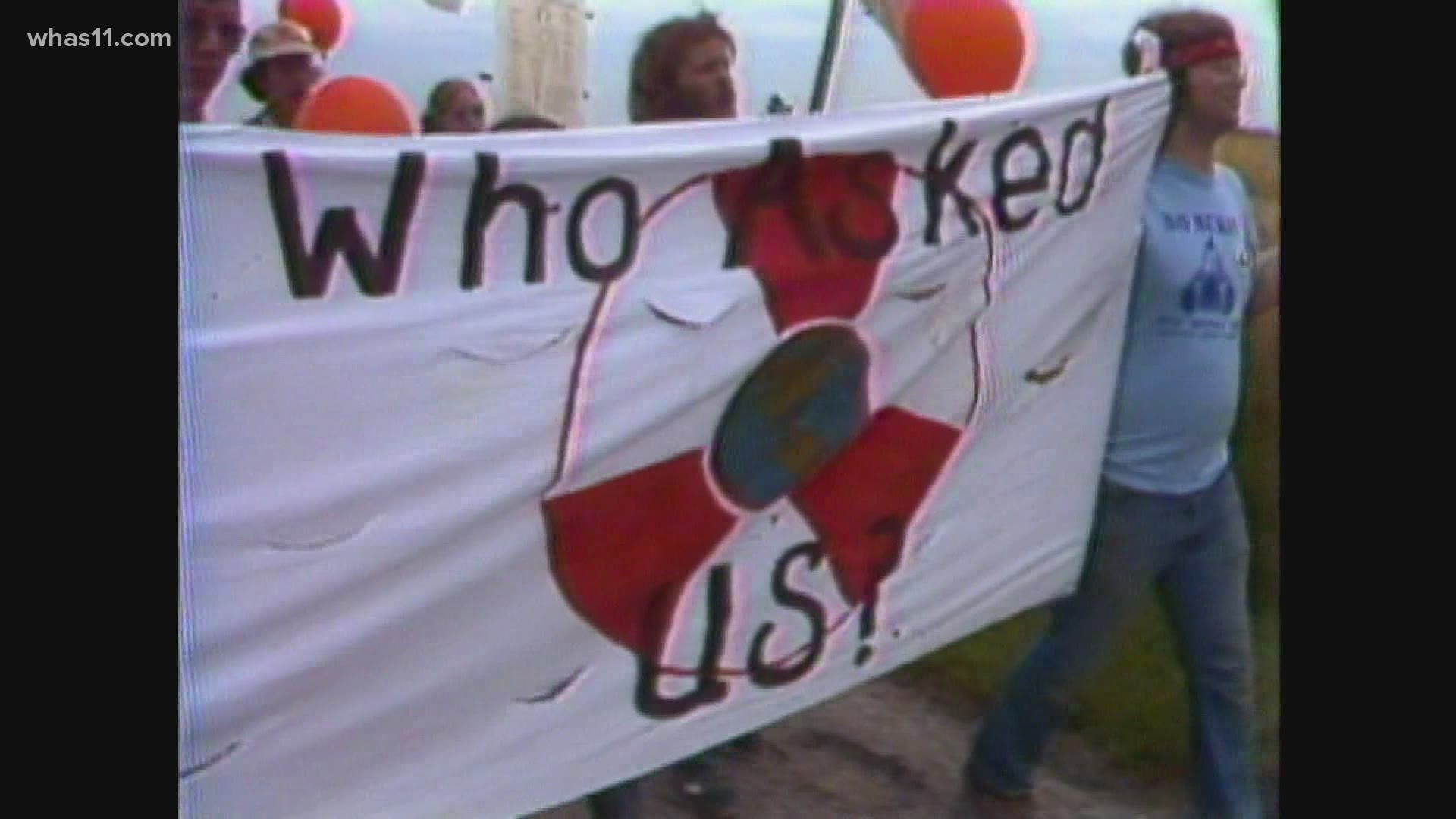 LOUISVILLE, Ky. — In 1978, construction was underway after plans were announced for a nuclear power plant near Madison, Indiana three years earlier.

Demonstrators simulated a nuclear plant disaster, laying down in front of PSI headquarters.

They were prepared for the visit by the demonstrators with security forces alerted from the local level to the state police riot squad.

The clear opposition, only one obstacle facing continued construction at Marble Hill.”

“The nuclear regulatory commission is now investigating whether or not 170 improper repairs were made deliberately," an original report stated.

Workers inside the plant reported faulty repair jobs and dangerous concrete work and inspectors began around the clock surveillance at the site to improve practices.

"When we were allowed to tour Marble Hill two weeks ago, we saw a huge honeycomb that was being repaired."

"An engineer at the University of Louisville said that honeycombing is extremely dangerous especially at power plants."

After a year and a half delay, inspectors said construction could safely resume. As it advanced, so did the facility's financial problems and public concern.

"Two, four, six, eight, we don't want to radiate," several hundred demonstrators chanted as they marched through the countryside.

Many of them didn’t agree with the construction and said their only option was civil disobedience.

"Nuclear power is dangerous to all living creatures in their natural environment," a demonstrator said.

They wanted an immediate halt to construction on the plant, which was still years from the expected completion date. Armed with ladders, the demonstrators spread out.

The leaders designated 80 people to climb over the fences. Once inside, they dropped to their knees and planted small peach trees as a symbolic move. The site was a former peach orchard.

Credit: WHAS-TV
A demonstrator plants a peach tree at the site of the Marble Hill nuclear powerplant under construction.

Then they began walking, not getting far before sheriff's deputies caught up to the crew. Police said that day they arrested 89 people with little resistance.

A safety inspector cited electrical work and at that point, the project's completion cost was up to $6 billion, more than four times the original estimate.

That's when the governor stepped in, creating a task force to study future plans. In, 1983 that group readied its report right before Christmas.

"It his recommendation that the marble hill facility presently being constructed by the Public Service Company of Indiana not be completed."

The task force ultimately decided the construction cost was too high and the power was not really needed.

"The PSI board of directors will meet next month to consider the task force's recommendation and decide whether to shut down or look for an alternative form of financing to keep construction going."

But before the end of that year, the builder laid off more than 5,000 workers and ordered work to stop at Marble Hill.

"Hundreds have already pulled up stakes, in search of another job, in another town."

A local newspaper, The Madison Courier, offered free "job wanted" ads and said more than 100 workers took them up on it.

It was the end of the Marble Hill era, though it would be many years before the impact subsided and Marble Hill was just a memory.

What was built on the property sat untouched for about 20 years before demolition started in 2008.

Since then, most Marble Hill structures have been torn down and scrapped away.