A second grader at LaGrange Elementary expresses her gratitude to her school safety officer in a poem that is touching hearts across social media.

LOUISVILLE, Ky. (WHAS11) — As school shootings seem to become more commonplace, several school districts have introduced school resource and school safety or security officers to their halls. While supporters applaud the effort to keep kids safe, some opponents express concerns that a police presence in schools could instill fear in the students.

However, one local girl calls her school’s safety officer “the greatest hero of all”.

Izzy, a second grader at LaGrange Elementary, expresses her gratitude to School Safety Officer Jeff Dawson in a poem that is touching hearts across social media.

The poem, titled “Police Hero”, was written for the National PTA Reflections contest. Reflections is a program that encourages students from Pre-K through 12th grade to submit original pieces of art, helping them express their own thoughts, feelings, and ideas.

The theme for the 2018-2019 school year is “Heroes Around Me” and Izzy’s poem describes how Officer Dawson is a hero to her: 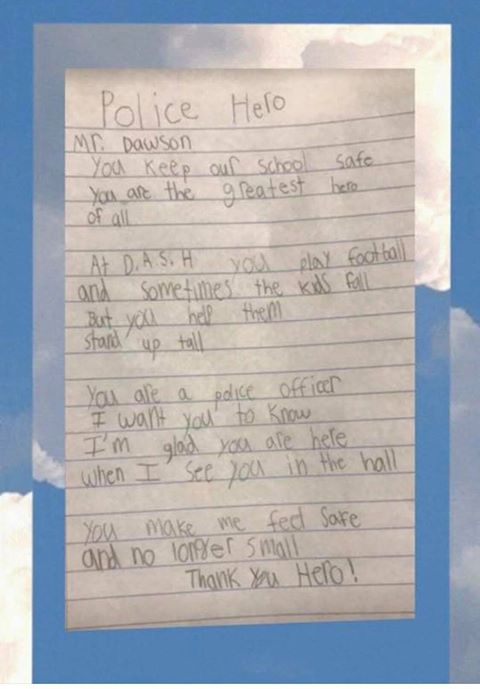 You keep our school safe

You are the greatest hero of all

At D.A.S.H. you play football

And sometimes the kids fall

But you help them

You are a police officer

I want you to know

I’m glad you are here

When I see you in the hall

You make me feel safe

And no longer small

The Oldham County School Board voted unanimously in July to add seven School Security Officers to the district as a proactive effort to protect their students.

Izzy’s father, Ron Altman, says that Izzy’s poem is “proof that the Oldham County resource officer program…has been a great success and is making the students and parents feel more at ease.”

Kevin Woosley, a member of the Oldham County School Board, agrees, sharing Izzy’s poem on his Facebook page.

“This should erase any doubt that the School Safety Officer Program…has been a positive influence on our students,” Woosley said in the post.

Members of the LaGrange Elementary community also shared their gratitude toward Officer Dawson.

“My daughter loves having Officer Dawson there. She said it makes her feel even more safe!” one woman said.

Izzy’s poem has been chosen to advance to the state level of the Reflections contest, but it’s safe to say that she’s already won in our hearts!

FOCUS: One year after deadly Kentucky tornadoes, many still don't have a home