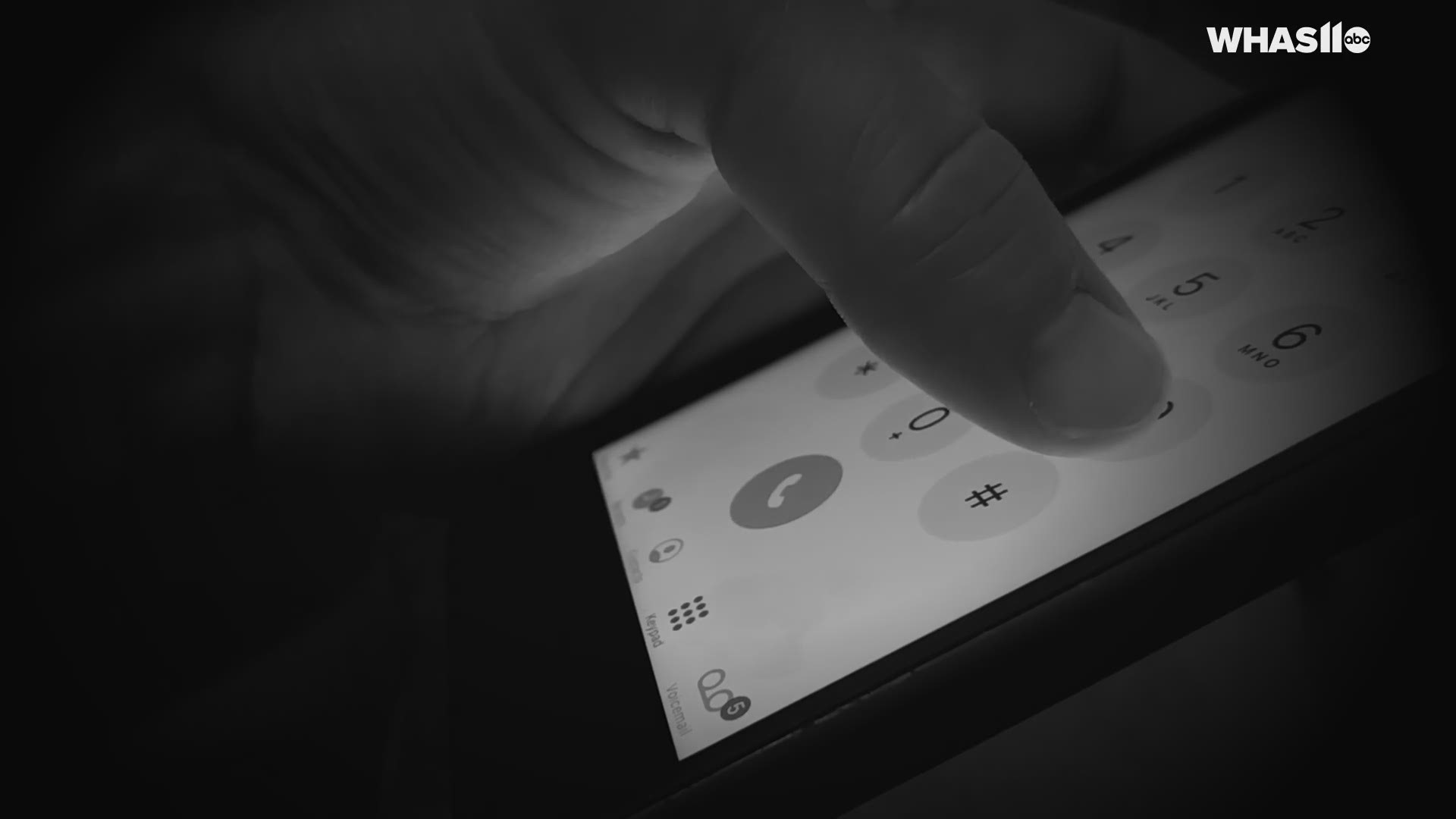 LOUISVILLE, Ky. — We want to warn you: The information presented in this report may be difficult for some to watch.

Suicide has been the 10th leading cause of death in the United States among adults, and among young adults, it’s been the second, according to the CDC. It’s why experts say crisis call centers are critically important, helping people connect with potentially life-saving resources.

But during the pandemic, those resources have been especially strained. Many crisis call line counselors say calls about suicide and depression have increased in frequency.

“I really can truly understand how people could get there, and that’s sad," said Louisville resident Kevin Burch. “I can sit here and cry just thinking about that."

Desperate for help, he said he called the National Suicide Prevention Lifeline last month. He said he was put on hold for around 20 minutes.

"That really makes you start to think, holy smokes this is not my day," he said.

Meanwhile, he said he planned his death.

Burch made it through the night. But his anxiety attacks have persisted. More than a year of the pandemic left him without a job. He used to sell cable and Internet. COVID-19 has prevented that.

And finding a job has its own challenges.

“I can’t go driving around because the tags are expired, I don’t have car insurance, my license is passed due, and it takes money to get those things and I have no source of income," he said.

He said unemployment payments just stopped coming in September. And hundreds of calls to state agencies have been unsuccessful.

But among the worst punishments, he said, has been isolation.

“The socialization, that’s been the awfulest thing. Not being able to go to a restaurant with your buddies and just talk and have fun," he said.

“We definitely have seen an increase in calls related to the unprecedented pandemic situation that we’ve all been through," said Geneva Robinson, the director of the Louisville area’s crisis and information center at Seven Counties Services.

“In my younger life, I dealt with my own severe depression. And I did make several attempts on my own life," said Robinson.

To relieve her pain, she takes medication every day and devotes her life to showing others that in their darkest moments, help is within reach.

But she said that need has never been greater.

“We, at the height of the pandemic, saw a 40 percent increase in calls to all the lines that we answer," she said.

It's why she said it’s disheartening but not surprising Burch was forced to wait when he called the National Suicide Prevention Lifeline. Each call gets routed through more than 180 crisis centers around the country.

“It goes through a national call switchboard if you will that tries to find the next available open phone line for a trained counselor in their network of centers," said Robinson.

But on the night Burch called, it took much longer than usual to find one. So far this year, the average pickup time for Louisville’s crisis call center was around 2 minutes. A typical call lasts about 15 minutes. Calls have not only increased in frequency and length during the pandemic, but they’re also more intense.

“There have been just so many new problems that people have experienced," said Robinson. "We have a number of folks who have called us who actually have loaded guns in their hand and they want us to give them some reason not to have to go and pull that trigger… We have people that call that have already taken an overdose of medication and they just want someone caring to listen to them and to be with them while they die.”

“Do you think that COVID has opened our eyes in some ways about the need for mental health services?” asked FOCUS investigative reporter Paula Vasan.

“There is no question about that," said Lisa Willner, Kentucky State Representative.

RELATED: New 911 initiative would send health professionals instead of police for some emergencies in Louisville

Willner, a licensed psychologist, supported legislation this year to make mental health a higher priority. Among the bills she advocated for that have been signed into law, House Bill 140 expands access to telehealth.

For now, Burch just tries to make it through the day.

He hopes someone returns his calls about unemployment benefits. He hopes he’ll find a job again.

“I haven’t had any significant income in forever," he said.

And he hopes that if he revisits that dark and painful moment, someone will pick up.

If you are struggling with depression and thoughts of suicide, know that you’re not alone. We as a community care about your life. Here are some local and national resources to help you.

These resources are free, and you can access them 24/7. Counselors said if no one picks up within around three minutes, hang up and keep trying.

The National Suicide Prevention Lifeline is composed of a network of over 180 local and state-funded crisis centers located across the United States.

Trained counselors at these local crisis centers respond and provide support to people in distress every day. When people call the Lifeline, they hear a greeting, and then music as they are routed to their local crisis center. If a local center is unable to answer the call, the call is then rerouted to one of their national backup centers. The average speed of answer for Lifeline calls is approximately 45 seconds.

“That said, we recognize that wait times may increase when calls are routed to states with limited crisis center resources, or during times of high call volume, and that this can be difficult for people in crisis,” said a spokesperson at the National Suicide Prevention Lifeline.

“We encourage those who have had a negative experience with the Lifeline to share them with us via our Contact Us form,” the spokesperson said. “It is a priority of the Lifeline to continue to strengthen our growing infrastructure, help support local crisis centers, and provide support for the counselors answering Lifeline calls and chats across the United States.”

Have a story tip? Contact the FOCUS Investigative Team at focus@whas11.com.