The board met to discuss issues including "test to stay" but the conversation went south during the public comment period when SROs were brought up. 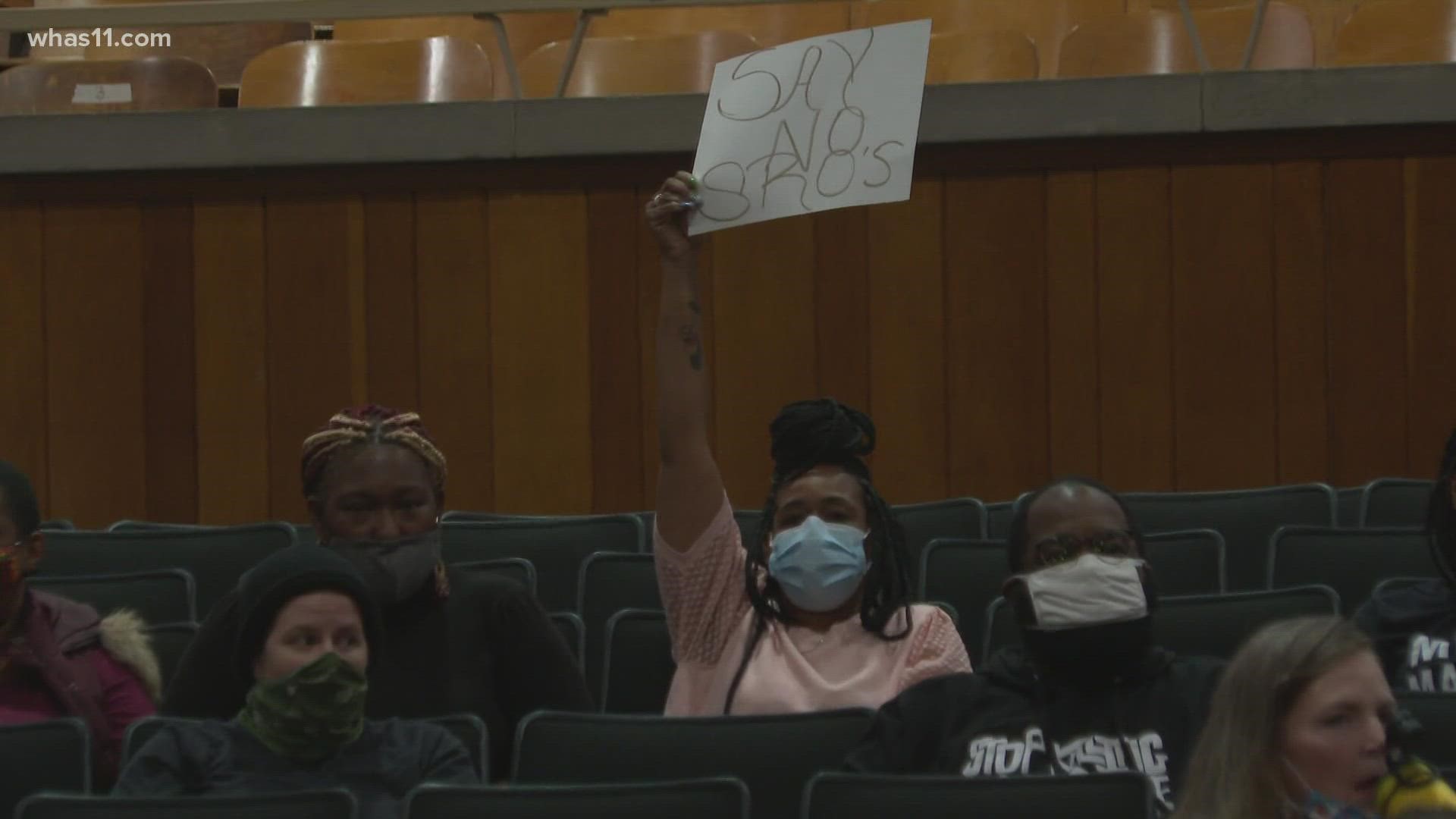 LOUISVILLE, Ky. — A Jefferson County School Board meeting ended abruptly after the public comment period erupted into a heated shouting match among attendees.

The board met at Central High School Tuesday night to discuss issues including JCPS' “test to stay” proposal.

A handful of speakers instead discussed school resource officers (SROs) and educational values. Some saying, "SROs on every campus is not the solution," while others saying, "If someone were to show up to school with a gun, those officers would have to commute to the school to deal with the emergency and then just talk aggressively because they're not armed."

"They're not going to protect us," one woman in the crowd said.

The debate ignited emotion. Despite 33 speakers signed up to speak, only six were able to finish. A shouting match broke out among people in the audience while the 7th speaker, a parent, tried to talk about "Test to Stay." The crowd had other concerns on their minds.

"A lot of people had different opinions and things to say," said "Streets", a community activist.

The JCPS Board took a five-minute recess with members leaving the stage, hoping things would de-escalate.

After a handful of speakers talking SROs, and educational values - a shouting match breaks out among people in the audience.

The Board announced a 5-minute recess, but since have left the stage. Many folks are leaving right now. pic.twitter.com/THqeWuh78v

Moments later, the school auditorium was evacuated and some who were in the audience went outside of the school and held a protest. Soon after, students themselves voiced their concerns firsthand for all to hear.

"I can almost understand where Chief Shields is coming from, but emphasis on almost, because she is not a student, she is not a student of color -- she cannot speak for us," said Atherton High Schooler Josiah Finley. "Don't add more weapons to the building."

Atherton High senior Emily Pabon was the first student to grab the megaphone to speak in front of the crowd.

The look from just outside Central High School pic.twitter.com/UcgoNvBnCB

Board members did return to the stage, but once they were back in session, chairwoman Diane Porter put forth a motion to adjourn the meeting at the advice of law enforcement.

Ultimately, doors were shut and people went home without any further public response from the school board.

JCPS spokesperson Renee Murphy said that agenda items originally scheduled for Tuesday's meeting are now on hold. Murphy didn't give a specific day for when those discussions will resume.

1 / 8
Alyssa Newton/WHAS-TV
A group protests outside of Central High School after a school board meeting was abruptly ended following an argument during a public comment session.