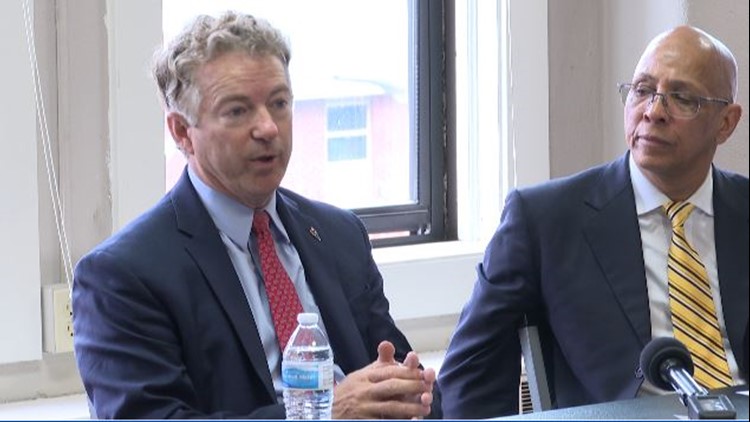 FRANKFORT, Ky. — One week after Senator Rand Paul sat down with community leaders to talk gun violence, the VIOLENCE: Impact on Children Learning report was officially entered into the Congressional Record.

The report, developed by Christopher 2X Game Changers Organization, consists of interviews, research, and a collection of data addressing the impact of violence on families and children learning.

"Sen. Paul, who happens to be a surgeon, totally felt the impact of what everyone told him Feb. 24 in regards to how wreckless gun fire has impacted children and their focus on learning. We at Christopher 2X Game Changers Organization are extremely pleased that Dr. Paul has allowed the voices of survivors and children to be heard on a national scale."

According to the Senator, it “looks at how violence has affected families and communities in Louisville and tells the stories of those whose lives have been cut far too short, as well as some of the many who are working hard to build a better future.”

In February, U.S. Senator Rand Paul sat down with community activists in Louisville to listen and take action on combating violent crimes.

As stated in the record, Dr. Paul said:

“Mr. President, I recently had the honor of being welcomed by Game Changers, an organization based in Louisville, KY, devoted to guiding our youth toward productive and meaningful lives, for a panel discussion on the impact of violence in our community. The executive director of Game Changers is Christopher 2X, who I have known for many years and watched change the lives of so many Kentuckians through his advocacy, leadership, and community building efforts. In December of 2019, just a few months ago, Christopher showed me the findings of Game Changers’s study on the impact of youth violence recently released by his organization. Subsequently, I asked him to organize an event in West Louisville with a panel of community leaders and parents to discuss the report and how violent crime affects the lives of Louisville youth.

“At the event, we not only discussed the findings, but also heard from Louisvillians whose real-life stories are contained in the pages of those reports. Kentucky Education Commissioner, Dr. Wayne D. Lewis, educated us on the burden that violence has on children. However, the only way to grasp the true tragedy of violent crime is to hear from those impacted. I met with Deshante Edwards, who not only lost her son, Donte, but now sees her 6- year-old grandson subsequently lose focus in school.  I listened as Krista and Navada Gwynn told me that, as a result of the murder of their son, Christian, their 17- and 11-year old children are too petrified to go outside.

“Only personal stories such as these truly demonstrate the extreme toll taken on children exposed to violence. That is why I feel compelled to share Game Changers’s findings on violence and its impact on our youth with my colleagues. Tragically, children are exposed to violence in every corner of our Nation. I ask unanimous consent that this report be printed in the CONGRESSIONAL RECORD with the hope that every Member of Congress will read it and work with me to create safer communities for our children.”