Kentucky could be next stop for Safe Haven Baby Boxes

The Baby Boxes end shame for mothers who need to surrender their child. 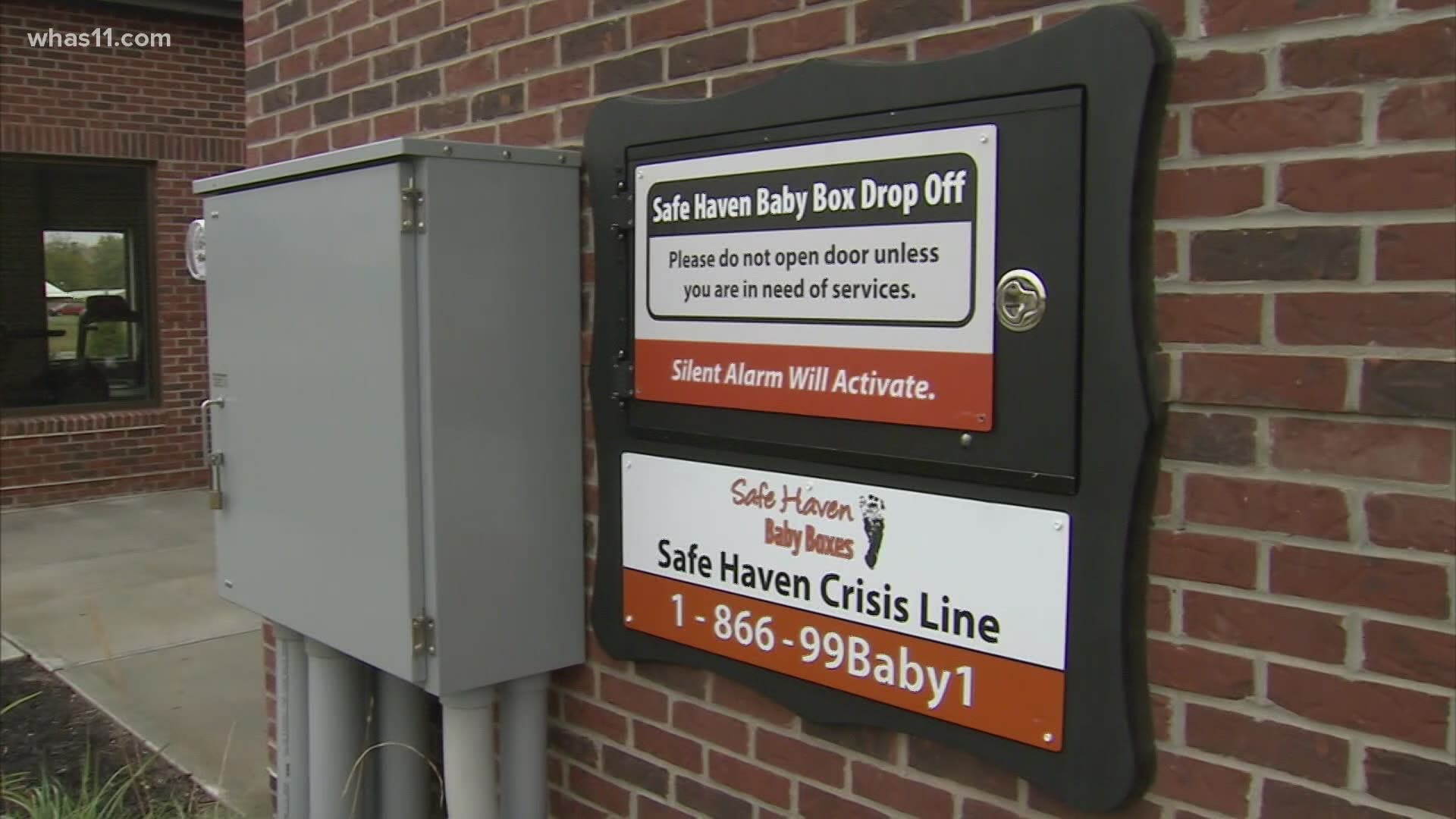 FRANKFORT, Ky. — The founder of Safe Haven Baby Boxes is hopeful a bill with bi-partisan support will bring them to Kentucky.

The boxes allow a new mother to surrender their baby, without fear of persecution or judgment, within the first 30 days of life. They provide more protection to the mother and child than a Safe Haven Law, which is applied differently in each state.

"Safe Haven laws have been around for the last 20 years. A woman can walk into a fire station, police station or hospital and surrender their child no questions asked. That works 50 to 70 percent of the time," Monica Kelsey, the founder and CEO of Safe Haven Baby Boxes said.

Kelsey says that number could be much higher if Safe Havens were completely anonymous. It's why she designed the Safe Haven Baby Box about 5 years ago.

It's a safety device provided for under each state’s Safe Haven Law and legally permits a mother in crisis to safely, securely, and anonymously surrender their child if they are unable to care for their newborn.

A Baby Box is installed in an exterior wall of a designated fire station or hospital. It has an exterior door that automatically locks upon placement of a newborn inside, and an interior door that allows a trained first responder access to the infant. The whole process takes no more than a couple minutes to complete. The baby is checked over at the hospital and then brought to a foster or adoptive family.

Credit: Safe Haven Baby Boxes
Within minutes of the Baby Box alarm sounding, a medically trained first responder will check over the baby before it's taken to the hospital.

Several mothers who've used the Baby Box have stayed in contact with Kelsey and her organization, grateful for giving them an anonymous option.

One woman, known as Baby Mila's birth mom, says she gave birth at home and alone, after six hours of labor. She feared the consequences of dropping her baby off at a Safe Haven site, saying how dangerous it could be if her name was put into the system. That's when she discovered the Baby Boxes.

"There were no cameras or anyone I had to justify my decision to. I also didn't want them talking me out of the decision that took me so long to make. I had time to say my 'I love you's' and 'goodbyes,'" she said in a recorded interview for the organization.

She says she left a 2-page letter inside the box with the baby before closing the door and walking away, knowing her little girl was already in better hands.

Today, 60 baby boxes are installed at fire stations and hospitals across Arkansas, Ohio, Florida and Indiana. A House bill in Kentucky could make it happen here, too. It passed unanimously in the House - and is now making its way through a Senate committee, scheduled for Thursday, March 11.

"I can't wait to see Kentucky adopt this and see how many babies we can save," Kelsey said. "Because, right now babies are being placed in dumpsters, that have no alarms, no heating elements. And that's what women are choosing, so we have to give them another safe, legal option."

"Bowling Green, Kentucky was a prime example of this. A baby was taken to a Safe Haven location, to a [unmanned] fire station in Bowling Green and left at the doorstep. You have to ask yourself, why did this mother go all this way to Bowling Green but then place her child at the doorstep and walk away? It’s pretty clear, they want anonymity," Kelsey said.

Fire departments from at least 3 Kentucky cities have already requested a box and more donors are stepping up to foot the $10,000 bill.

"The people in the community are the real heroes, who are saying, 'no baby's going to die in my community if I have anything to do with it,'" Kelsey said.

It's a cause that hits close to home for Kelsey, who was conceived out of rape in the 1970s. Her birth mother abandoned her just two hours after giving birth. Kelsey says today, mothers have a safe place to fall.

"A mother that chooses to place her child in one of these boxes, and basically says, I want what’s best for my child and it’s not me... that’s selfless and heroic," Kelsey said. "We need to encourage these mothers that it’s okay if you find yourself in this situation, we're not here to shame or judge you. We're here to walk alongside you, to keep your child safe and make sure their life goes on as well as your own," she said.

Kelsey wrote the book Blessed to have been Abandoned: The story of the Baby Box Lady, which comes out next month. Inside, you'll find a letter from a mother who used one of the boxes.

Credit: Monica Kelsey
In her first book out later this month, Monica Kelsey shares 'the story of the Baby Box Lady.'

The Safe Haven Baby Boxes organization staffs a 24-hour hotline for women to talk to a trained professional as they consider their options.

"You will always talk to someone. One is a licensed counselor. The other is a psychologist. If both lines are busy, you get me," Kelsey said.

So far, 10 babies have been surrendered in these boxes since 2016, five of them in Indiana just last year. Another 97 babies were handed over because of the hotline, which has received more than 8,000 calls in the last 5 years.

(2016) The Kentucky Safe Infants Act allows parents to leave newborn infants less than thirty (30) days old at a staffed police station, fire station, hospital or participating place of worship without fear of criminal prosecution or allegation of neglect. The medical provider, firefighter, police officer or staff member at a participating place of worship should ensure the child is seen at the nearest emergency room for an evaluation and contact child protective services.  As long as there are no other indicators of abuse or neglect, the department initiates the case as a dependency action.  If the parents do not come forward within the initial thirty (30) days of placement, the department requests a waiver of efforts and proceeds with termination of parental rights.

(2015) The Indiana Safe Haven Law enables a person to give up an unwanted infant anonymously without fear of arrest or prosecution. As long as there are no signs of intentional abuse on the baby, no information is required of the person leaving the baby. Any knowledge of the date of birth, race, parent medical history, child's health or anything that would be useful to the child's caregiver would be greatly appreciated. Once the baby is examined and given medical treatment (if needed), the Indiana Department of Child Services will take the baby into custody through Child Protective Services where it will be placed with a caregiver.