Louisville has explored options to allow for additional seating in streetside parking spaces. 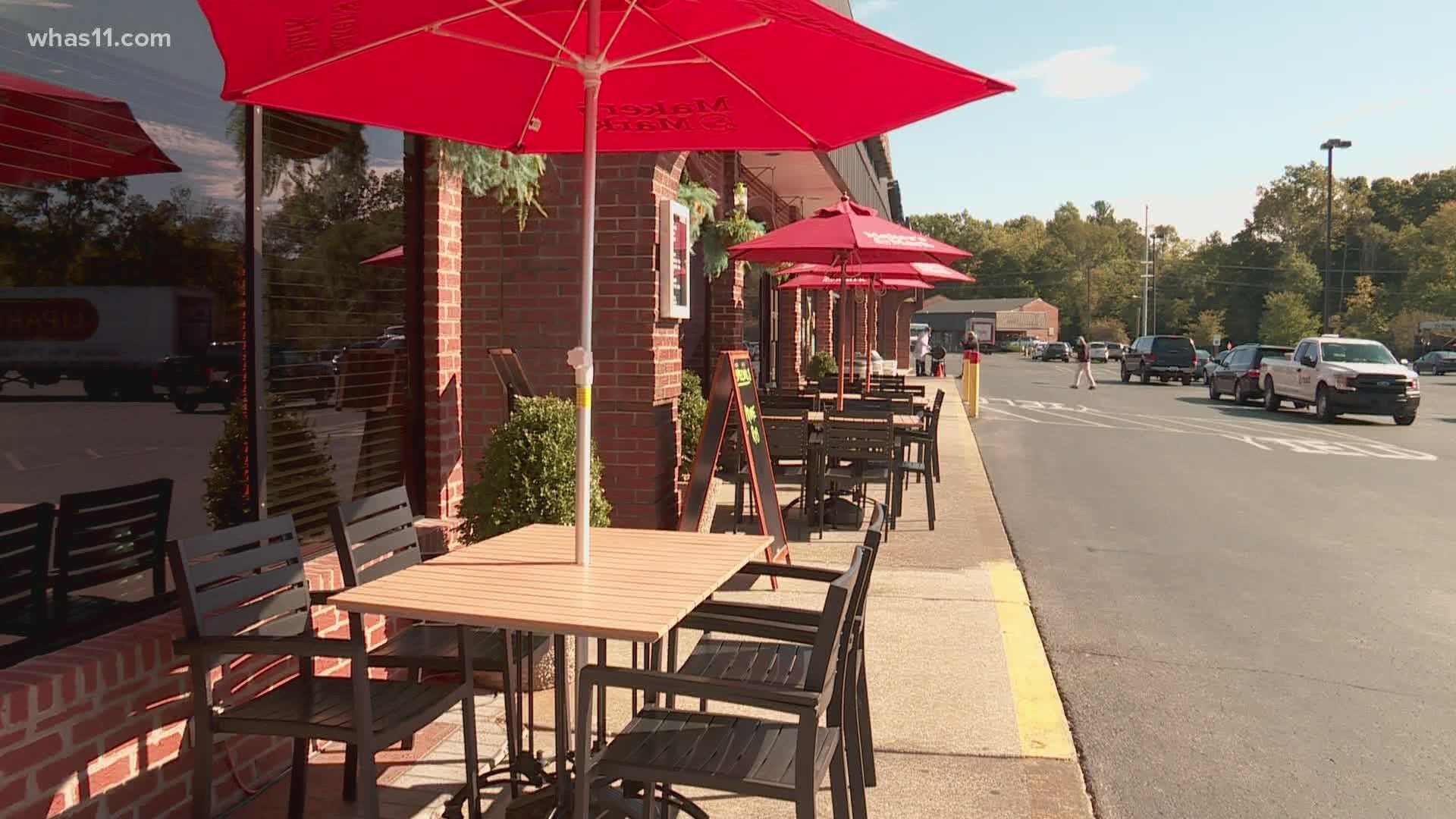 LOUISVILLE, Ky. — Outdoor dining is not a novel idea, but it has taken on a much more important role for businesses during the coronavirus pandemic. With the temperatures dropping, many restauranteurs are faced with the prospect of losing that option, and with that, a big portion of their revenue.

"It's a make or break," Rick Dissell, the owner of The Blackstone Grille in Prospect, said. "We have to figure out how to get people in the winter. Those tables are basically full every night, so if we can't get them in, it's going to be a chunk."

Dissell has four tables outside, which he said can seat a total of 20 people, but those seats are always filled every night. With the CDC preaching social distancing and limiting gatherings, especially indoors, and the state limiting the number of customers allowed inside, outdoor seating has become a necessary service for many restaurants.

Over the last several months, many cities and towns have allowed restaurants to expand their outdoor dining options into the parking lots and sidewalks and Louisville has also explored options to allow for additional seating in streetside parking spaces.

Dissell said he is considering several options that would allow him to continue outdoor seating during the colder months, including seating in an insulated bubble or adding heating sources, but he has also made changes inside The Blackstone Grille to encourage customers to dine in.

"People are still a little antsy as far as going out to dinner inside," he said.

According to Dissell, the restaurant has a new air quality system that he had installed a month earlier. The device, known as a bi-polar ionization (BPI) air quality device, is installed into the HVAC system and claims to kill 99 percent of bacteria, mold, and viruses, including the coronavirus, by emitting ions into the air that seek and neutralize them in the air and on surfaces.

The Environmental Protection Agency said these air cleaners and filters can reduce air pollutants including viruses, but stresses that they are not enough on their own to protect people from the coronavirus but should instead be used in conjunction with other best practices recommended by the CDC.

Dissell said despite having this BPI technology, his staff and customers will still need to follow all the safety guidelines put forth by the CDC and the state, which include wearing masks, practicing hand hygiene, and distancing.

"This is the safest way right now is to do all the things you've been doing and using this as another layer of protection," he said.

At Agave & Rye, corporate regional manager Chris Britt is facing a similar problem when it comes to the prospect of losing outdoor seating to the winter cold. The restaurant opened its new patio earlier this year and Britt said it has accounted for around 70 percent of the revenue since it opened.

"Taking that away is like adding an extra mortgage payment or a house payment to us," he said.

Like Dissell, Britt said all options are being considered, but making sure customers feel safe dropping inside for a meal remains a big priority.

"We're going to do whatever we can inside whether that's moving tables around to increase our capacity as long as it meets the threshold," he said.