Rebecca Johnson says she’s not mad at her husband as she answers questions less than 24 hours after the Kentucky State Representative took his own life. 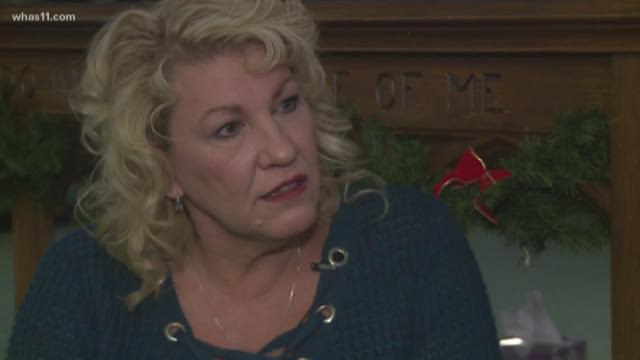 She was in mourning even if there were unanswered questions about the allegations against the man she loved, Kentucky 49th House District Representative Dan Johnson.

Still Rebecca Johnson sat down with us on the steps inside the chapel where her husband preached answering questions about the emotional roller coast and allegations hovering over the death of Representative Dan Johnson.

Related: Rep. Johnson's widow says she wants to take his seat in Frankfort

“It hurts me that he went through that alone, you know, and he had to really have a dark moment to do that and feel hopeless,” Rebecca Johnson said. “And it's devastating because most of the people know that's not who he is.”

The Bullitt County Republican’s widow continued to defend her late husband of the accusations leveled earlier this week in a report by the Kentucky Center for Investigative Reporting. Their 7-month long investigation into the controversial preacher turned politician looked at stories that swirled around Rep. Johnson for years including claims he once raised a woman from the dead, healed a deaf man and set fire to his church.

During his final news conference Tuesday, in this same chapel, Dan Johnson denied the arson allegations and new allegations that he molested a 17-year-old girl.

Rebecca Johnson described for us the moment she first noticed something was wrong.

"Someone had posted to the effect of something about how they didn't feel worthy,” she said, recalling the conversation on Wednesday afternoon. “They were somebody we knew and he said, ‘I felt like that today. I don't feel like I’m ever going to be good enough, you know?’ It's just like you keep trying to better yourself, you keep trying to do more and there's always an assault and there's always a problem and yet they never see the good things."

When we pointed out that many people had doubted the stories, including the denial of involvement in the church arson, Rebecca Johnson said, “Well there's a lot of people in this city who've had fires in their homes or their businesses but I don't hear anybody going to them, did you do it? You know, I don't know why my husband's had that laid at his feet and that was brought out years ago that he nor anyone in our church had anything to do with that church arson."

Rep. Johnson wrote in a Facebook message that he may have been “drugged” the night of the alleged molestation. We asked whether it was possible that he was indeed drugged and therefore didn’t remember assaulting the teen.

When asked whether she could verify claims that Dan Johnson once raised a woman from the dead, she answered, “I was with him! I was with him in San Diego when that happened and it's not him that did it. He prayed and there were other people there praying. He just happened on the scene, that's happened a lot. He's the kind of person that rushes into burning buildings, literally.”

She said that when she prays tonight she’ll ask, “God give me wisdom and give me strength and help my children and my family because we're gonna miss him.”