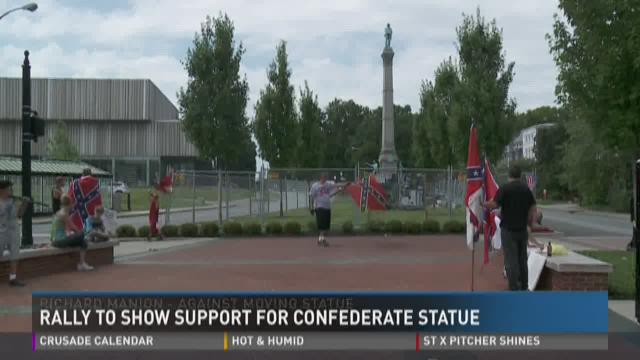 LOUISVILLE, Ky. (WHAS11) – As the debate on the removal of Louisville’s Confederate statue continues in court, supporters spent time showing appreciation for the monument in a rally Father’s Day afternoon.

More than 20 adults and children gathered at the monument’s site on South Second Street near the University of Louisville campus.

Is it history or hatred? So many feel strong on both sides.

The rally was planned and organized by the Gateway to the Old South group who says you can’t ignore the monument’s place in our nation.

The conversation heated up back in late April when Mayor Greg Fischer and University of Louisville President Dr. Jim Ramsey came together saying “this monument represents out history, a painful part of our nation’s history for many and it’s best moved to a new location.”

Those in attendance say the people that fought for the Confederacy are still U.S. citizens and honorable veterans.

The small turnout was hurtful to some.

“What do we have over a million people in the metropolitan area and we got about 30 people here? Pitiful. We’re never going to get anything changed with this kind of support,” Manion said.

A restraining order was filed to halt the progress of moving the statue and a judge later ruled it was on city property and it could be moved.

Many against the move say they refuse to give up because what happened in the past deserves to be honored.

There were no supporters of moving the statue at the rally.