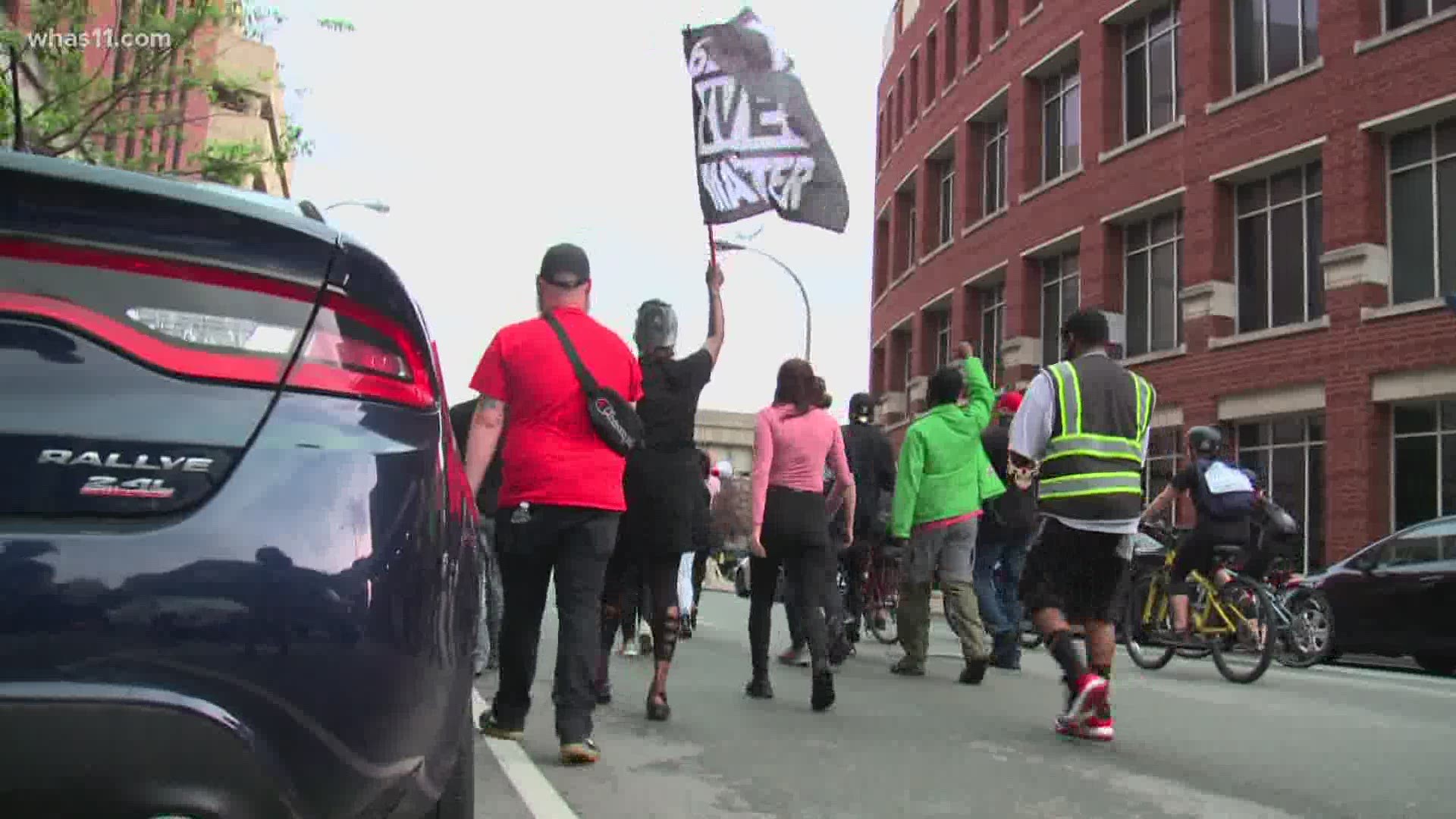 LOUISVILLE, Ky. — A group of protesters marched in the streets Wednesday night from Jefferson Square Park headed towards 26th and Broadway, where David McAtee was killed nearly a year ago.

But protesters were stopped by over a dozen Louisville Metro Police vehicles at Muhammad Ali and 15th Street.

LMPD in a statement Wednesday night said "multiple orders to exit the roadway and move to the sidewalk were given over a marked police unit speaker." When protesters didn't comply, according to LMPD, that's when officers began making arrests.

"A male from the crowd threw a brick at a police vehicle and fled the scene. Other individuals attempted to prevent officers from making arrests. The crowd became aggressive and additional units were called for immediate response," LMPD wrote in its statement.

Five people were arrested, including David McAtee's brother, Jamie McAtee. One other person was cited for obstruction of a highway. LMPD live streamed the arrests on their Facebook page. The five arrested are facing several charges including disorderly conduct, unlawful assembly, resisting arrest and pedestrian in a roadway. One individual is also charged with bribery of a public and servant and another is facing a charge of obstruction of a government operation.

Jamie McAtee spoke at Jefferson Square Park earlier in the evening. He said he wanted to march in honor of his brother and to keep his name from being swept under the rug.

After the announcement of no state criminal charges and no grand jury presentation in the shooting death of David McAtee, Jamie McAtee said he was upset.

The Jefferson County Commonwealth's Attorney said the LMPD officers and Kentucky National Guard members involved in McAtees death were justified because they were acting in self-defense. Investigators found McAtee had fired his weapon first.

"It's crazy and it's painful," Miss E, a protester, said. "I don't feel it's right. This decision that came down on David McAtee is so unfair and unjust."

Protesters said they were drawn back to the streets to support McAtee's family and continue fighting for justice.

"My feet are not going to stop until something gets changed," Miss E said.

Several events are planned to take place in Jefferson Square Park on May 28 and 29 to commemorate one year since protests first began in May 2020.