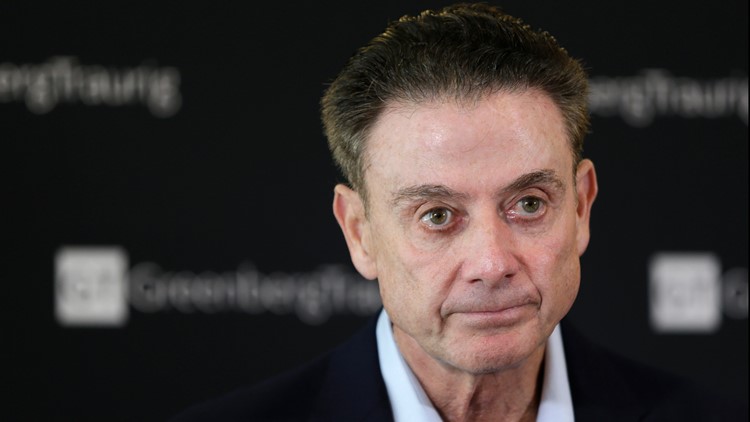 Photo by: AP
FILE- In this Feb. 21, 2018 file photo, former Louisville basketball Hall of Fame coach Rick Pitino talks to reporters during a news conference in New York. A recruiter, a coach and a former Adidas executive are scheduled to go on trial in New York in a criminal case that exposed corruption in several top U.S. college basketball programs. It also led to the firing of Pitino and sidelined the playing career of standout recruit Brian Bowen Jr. (AP Photo/Seth Wenig, File)

LOUISVILLE, Ky. — Nearly two years after the University of Louisville fired him, former Coach Rick Pitino returned to the city to fight over that firing.

Pitino was optimistic and upbeat, heading into the federal courthouse Tuesday.

He told the Courier-Journal that he didn’t think anything was going to come out of it but was going in with a positive attitude.

A lawsuit alleges that money was withheld after he was fired by UofL for a breach of the deal he signed in 2015 with the school.

Pitino filed the lawsuit against the University of Louisville Athletic Association in 2017.

According to the suit, Pitino says the ULAA placed him on “indefinite administrative leave” in September 2017, saying he was locked out of his office and didn’t have email access.

RELATED: Rick Pitino returns to Louisville to sign copies of his book

RELATED: Pitino lays all his cards on the table in new book

The second claim, Pitino accuses UofL of firing him with a lack of justified “cause” in his employment contract.

To this day, the Hall of Fame coach maintains his innocence, saying he had no part or knowledge of his accusations.

He was fired from the University after the men’s basketball team was accused of being involved in an illegal recruiting scheme.

In 2015, a separate scandal rocked the men’s basketball program after allegations emerged that a member of his coaching staff paid prostitutes and strippers to perform for players and recruits on campus.

As for his lawsuit for breach of contract, Pitino says the ULAA must pay him more than $4 million per year through June 2026 – a total of about $40 million.

Pitino left the courthouse at the end of the day but didn’t answer any questions about the mediation.

However, his attorney Steve Pence said in a statement, “We had a mediation today and it concluded today.”

WHAS11 News reached out to the University after the mediation and received a statement from their spokesperson.

“The university typically doesn’t comment on ongoing litigation. There is no settlement.”