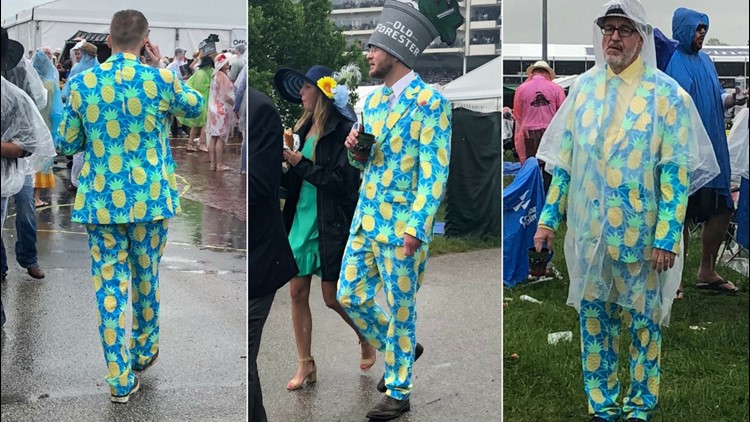 LOUISVILLE, Ky. (WHAS11) -- If you spent much time in the Infield at the Kentucky Derby this year, you most likely spotted a certain tropical fashion statement. Or two. Or ten.

Yes, we’re talking about the pineapple suit. Not only was this electric design easily noticeable – even under those stylish ponchos – but these suits were everywhere!

The pattern was so prevalent that we just had to do a little research to find out more.

As it turns out, this suit is just one of many wacky designs produced by an online retailer known as Opposuits. The company, founded about six years ago by a trio of Dutchmen, says that their suits “represent those who don’t take themselves too seriously but still want to maintain a sense of style.”

This is an easy goal to achieve when their inventory boasts over 100 statement-making suits in popping solids and prints. From Marvel to Star Wars to Pac-Man, they seem to have it all. Plus, when Christmas comes around, they offer a wide variety of festive fashions as well.

Opposuits has been featured on programs around the world and their creations have been worn by news anchors, late night hosts, and NFL players alike. Check out their impressive reach featured in the press reel below:

These suits are not just for the boys, either! For any ladies looking to switch up their office style, Opposuits offers options for women as well.

Many of Opposuits’ designs were on display at the Derby, but the “Shineapple” style was by far the most popular among attendees. If you’d like one of these suits in your closet, you can purchase one from the Opposuits website, or from select Kohl’s stores. The print comes in two styles – traditional and “summer”, which consists of a short-sleeved suit jacket and matching shorts. Both styles cost $99.99.

Could pineapples be the top fashion trend of 2018? It’s too early to tell, but we can say that the cheerful pattern may have brought a little sunshine to an otherwise dreary Derby day.