Coach is a guide dog, trained to be at David Holton's side every step of the way, in a world Holton hasn't seen for almost 5 decades. 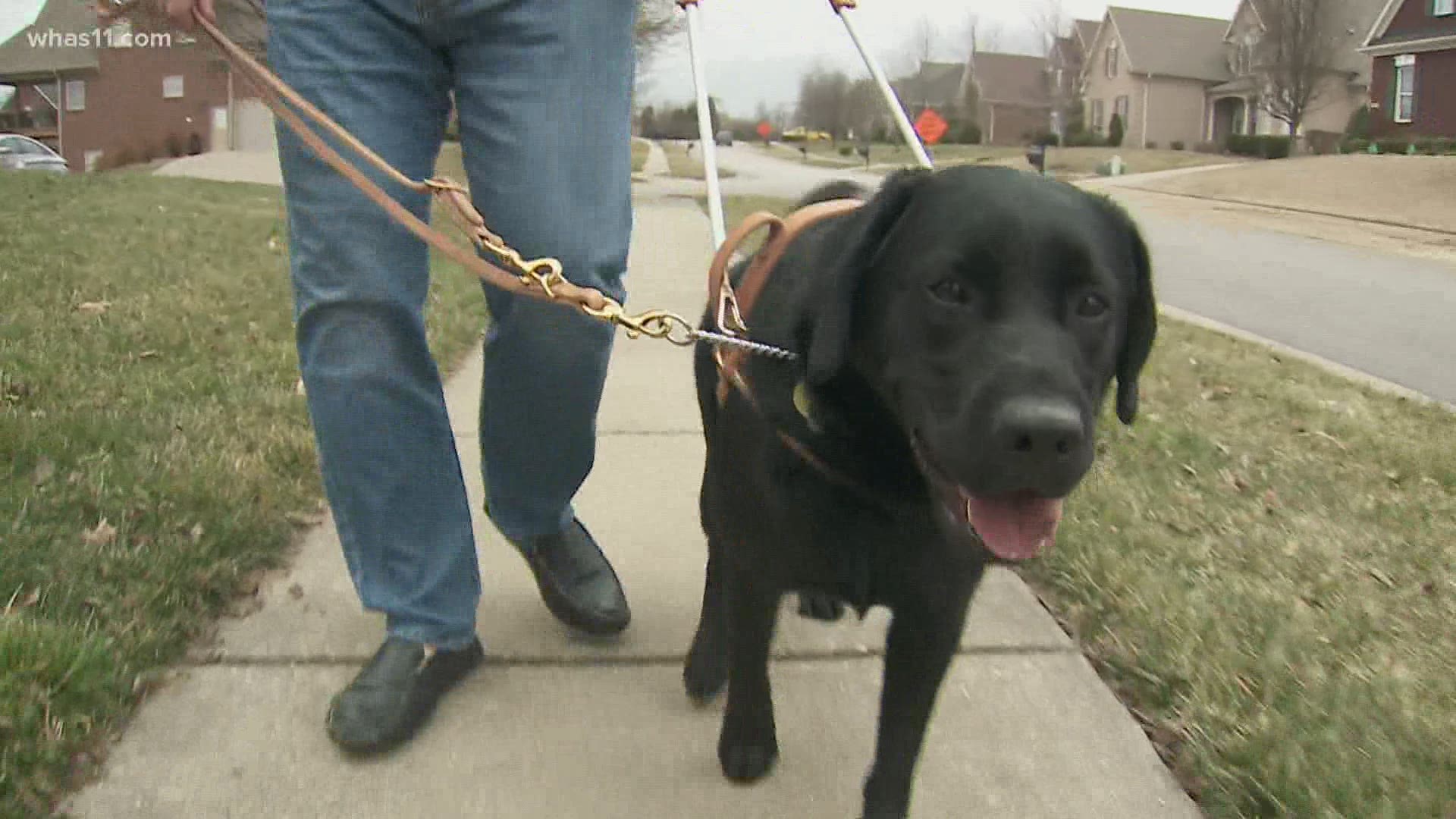 LOUISVILLE, Ky. — There's a place in Columbus, Ohio known for its dogs and the independence they bring to their owners.

David Holton, who lives in Louisville, has experienced Pilot Dogs first hand. It's why he keeps going back. It's a non-profit that trains dogs for people who've lost their vision or hearing.

"What difference has a dog made in my life? It's made all the world," Holton said.

For Holton's newest dog, Coach, there's quite a bit riding on his shoulders.

"It’s a great emotional attachment between a blind person and his or her seeing-eye dog. The level of trust you gotta have," Holton said.

Coach is a guide dog, trained to be at Holton's side every step of the way, in a world Holton hasn't seen for almost 5 decades.

"I lost my sight when I was 10 and life as I knew it was over," he said. "I had a brain tumor that damaged my optic nerve. My parents did everything they could to find out why I was having these head-splitting headaches, but it went undetected until it was too late.

Credit: David Holton
David Holton before he lost his sight to a brain tumor at 10 years old.

He attended the Kentucky School for the Blind for 4 years and managed life in the public school system for the next few years. But when Holton was 18 and enrolled at Morehead State, Holton's parents took him to Pilot Dogs. That's where he met his first guide dog, Simon.

"All five of my working dogs have come from there," Holton said.

He lost his last dog, Rock, to cancer in January.

"We had a good 10 years on the bench. We wouldn't trade it for anything," he said.

Holton's a retired district judge from Jefferson County. He presided over a courtroom known for its blind justice and the dog who sat alongside him.

Earlier this month, Holton spent several days in Columbus, getting to know Coach, who he named after his late father. They walked the city streets together with the trainer not far behind.

"It was the smoothest transition I’ve ever had," he said.

"The dogs are trained to sit down at steps up and steps down. They're trained to go from corner to corner from a crosswalk, not diagonal. And they're trained to go to doors," Holton said. "The dog goes to door handles. Isn't that cool? He even goes through revolving doors. Never lost a dog tail yet."

"It didn't cost me a dollar," he said. "Whether you’re a millionaire or on government assistance, the dogs, there’s no cost for students who get the dogs. There were 5 others while I was up there."

"The freedom is immense, what these dogs have meant to me," Holton said.

When asked why he prefers a dog to a cane, the answer is simple.

"No one ever asks to pet your cane. No one ever says, oh, that's a beautiful cane there! To me, it's a great door opener. Most people love dogs. So, it's a great way to meet people," Holton said.

Holton meets plenty of people through his private practice down the road from his home in Jeffersontown, but hints about a run for public office soon.

"I expect to be back downtown on a more regular basis," Holton said.

Watching Coach play with his other three dogs at home, Holton says, Coach's life is going to be very much like the others until it’s time to go to work.