Louisville police released body camera footage of the incident, saying officers were trying to help the girl after she fell. 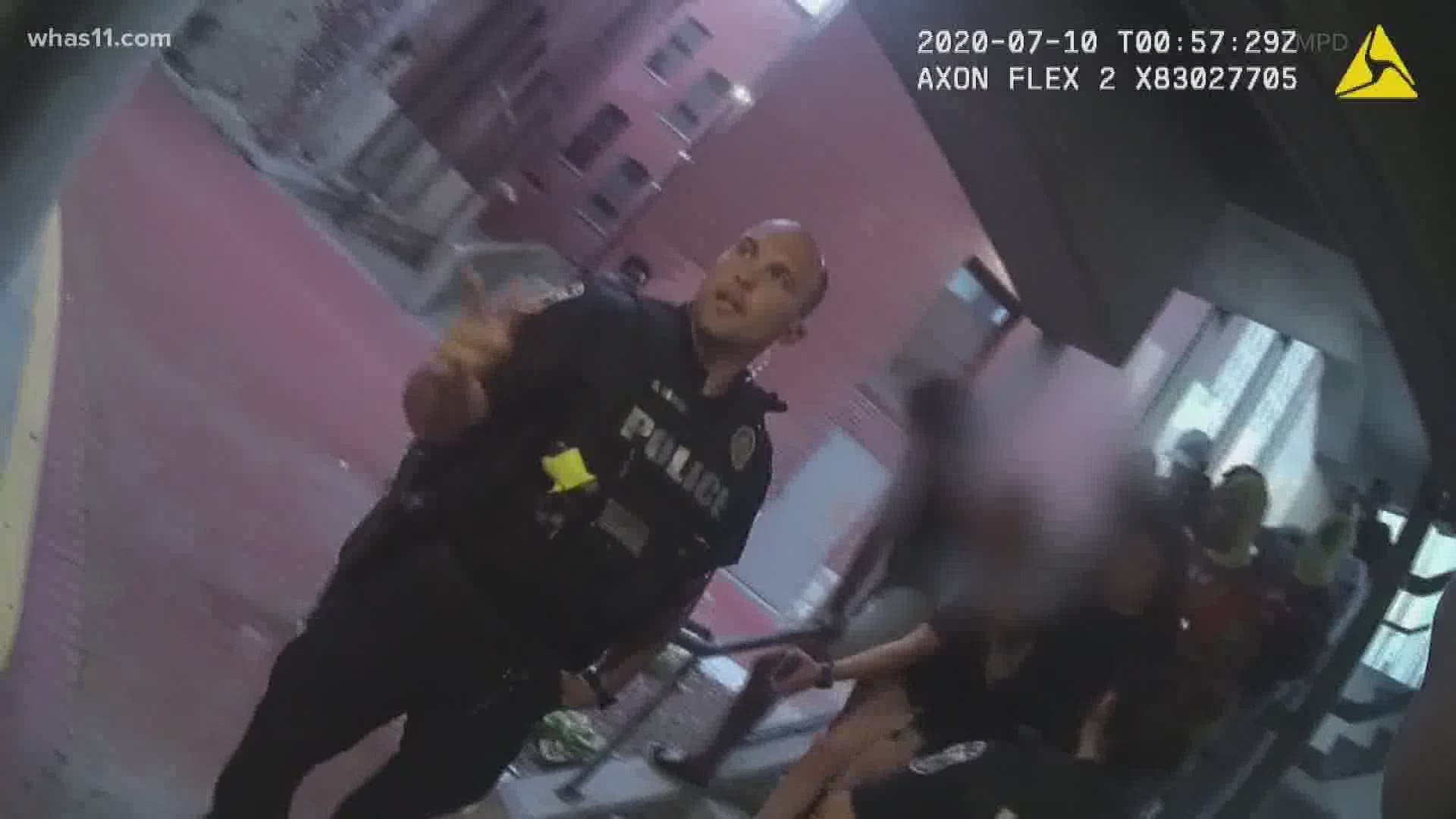 LOUISVILLE, Ky. — One person was taken to the hospital after Louisville police intervened during an incident at a parking garage Thursday night.

David Mour is an attorney that represents FIRM and the girl's father. He told WHAS11 News that his daughter Lilly had a concussion and possibly fractured ribs.

"It looks to me like she maybe stumbled a little bit, but from the other angle, not the one LMPD put out, it appears that one of the female officers grabbed her arm or hand or something and dragged her down to the ground and you can see where she hits her head," he said, describing what he saw in a Facebook LIVE video posted by Emma Peyton McKinney.

Police said they are investigating the incident that occurred during the protest at around 9 p.m. LMPD released body camera footage of the apparent injury, saying she fell while disobeying police orders.

"Police body camera footage, being released now due to heightened interest in this case, indicates the girl fell when she attempted to disobey police orders to stay in place while a situation was unfolding," LMPD spokesperson Lamont Washington said. "As depicted, two officers tried to assist her prior to her running from the scene." 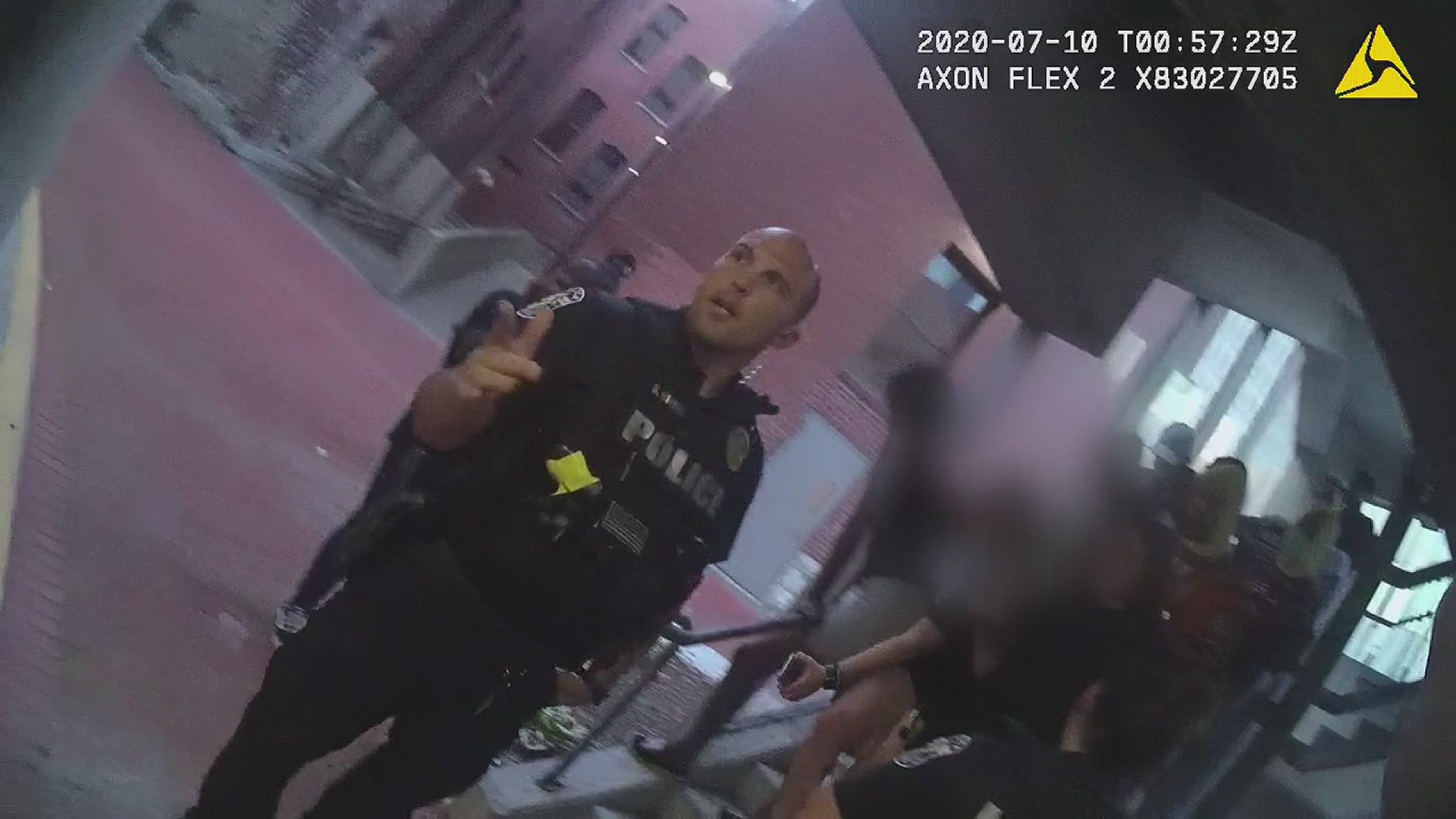 In the video, the girl appears to walk down the steps when an LMPD officer puts her hand out to stop her from leaving the staircase. The girl then falls as a different officer pushes a protester away from her.

A protester and the officer recording the event then appear to help the girl off the ground. She then takes off running. The officer yells, "Wait!" and then someone can be heard saying, "Let her go."

Police said officers were trying to help her before she left the scene, though her father said the livestream posted on Facebook tells a different story.

"The angle the police are showing is inconclusive," her father said. "I standby the statement that my daughter was manhandled. It was inappropriate."

It unfolded after a different incident around 8:30 p.m. on July 10. LMPD said a group of protesters were blocking a car trying to leave a parking garage. Video released by LMPD shows a man lie down in front of the car, and then kick it once as it pulled away.

Officers who were stationed on the roof of the Old Jail Building to monitor protests fired pepper balls at the crowd to disperse it, according to LMPD.

At the same time, police said another person set off a firework mortar at the back of building while trying to break a window, according to police.

Cheyenne Osuala captured the moment from her phone and recalls the night differently.

"They had already started shooting the [pepper] balls and stuff at us before that situation even happened," she said.

Osuala said the group went to the top of the parking garage to see if the people shooting from the roof were actually police. Once they determined it was LMPD, she said they headed back down.

That's when she said police pushed the 14-year-old to the ground. Osuala said she was also wrongfully arrested for criminal trespassing, and the force used on her resulted in a fractured wrist. Her arm is now in a brace. The arrest was also captured on the livestream.

"He put my arms around my back, but whenever he did it, he grabbed this wrist and was pulling my entire body off the ground by my one wrist," she described.

Osuala said it won't stop her from showing her support for this movement, and nor will it stop Lilly Mour.

"My child is injured, she's sore, her head hurts, her side hurts and she told her mother and I we would have to tie her down to keep her from coming out there tonight," he said.

Mour said he plans to pursue legal action against the officers involved in what he calls an assault on his daughter.

Police say they are still investigating.

Thursday marked the start of the seventh week of protests in Louisville, Kentucky. Protesters have been demanding justice for Breonna Taylor, who was killed by Louisville Metro Police in her apartment in March, as well as racial justice and police reform.