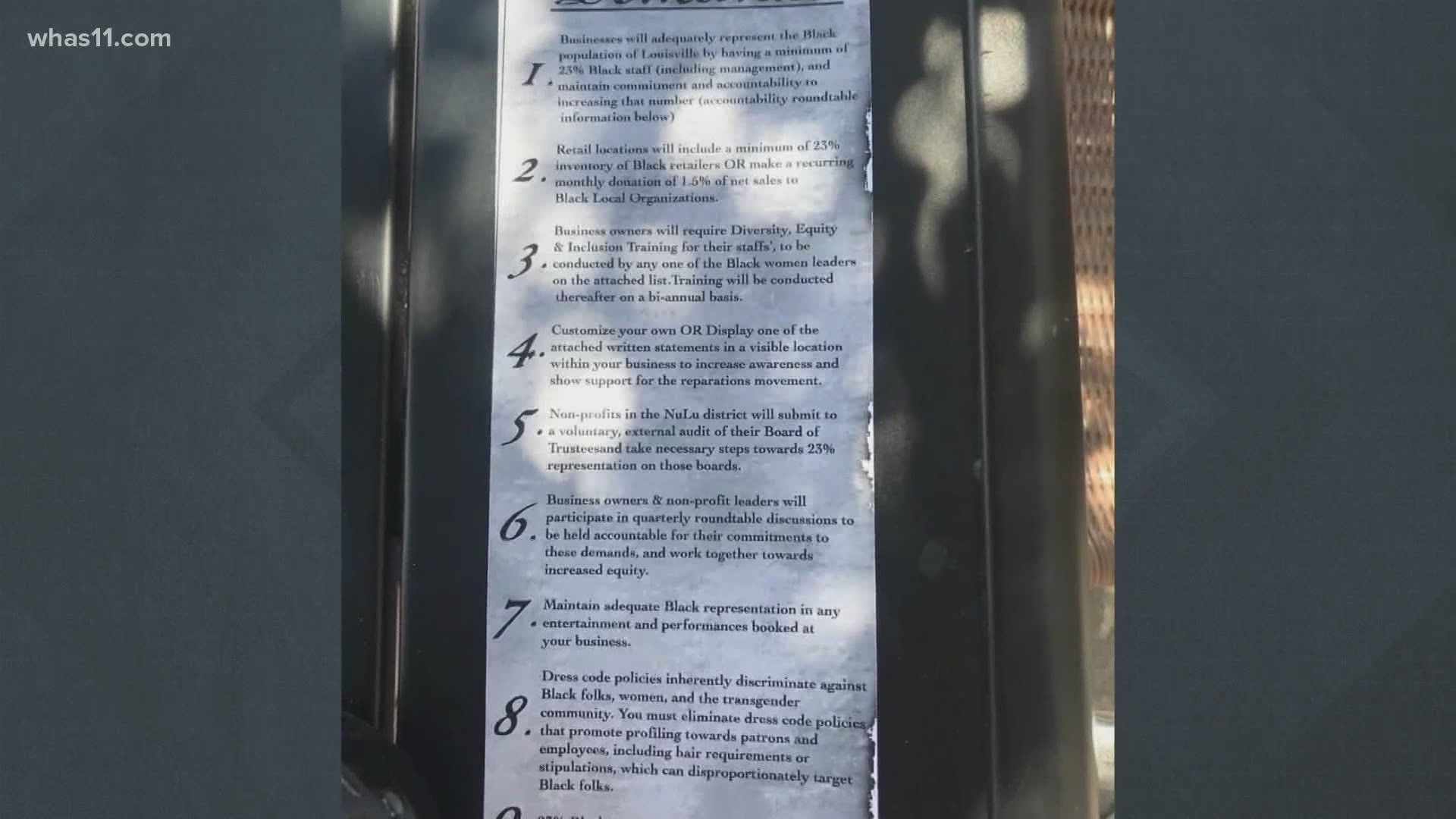 LOUISVILLE, Ky. — Some business owners in NuLu say they will work towards improvements one week after protesters blocked East Market St. and confronted businesses with demands for lack of inclusion, representation and hiring practices.

The list of demands includes having 23% Black staff and 23% Black representation on the NuLu Business Association board.

"We agree that this neighborhood has a real diversity problem and I think that we have a lot of work that can still be done in the community," co-owners of Nouvelle Bar & Bottle said. "[I'm] working on increasing the diversity of our portfolio of winemakers and other beers and spirits."

However not everyone is embracing the requests.

Fernando Martinez, who is a Cuban immigrant and co-owner of the new restaurant La Bodeguita de Mimi on Market St., says he took issue with the protesters' approach.

"There comes a time in life that you have to make a stand and you have to really prove your convictions and what you believe in...How can you justify injustices with more injustices?...We are not going to be intimidated," Martinez said in a public Facebook post.

"I don't think that if we did it in a more soft way they would've paid attention," Wilson said. She said the protesters did not have an intent to threat. "We believe that NuLu has a lot of performative allyship; it's acting as if you care about something," Wilson said. "But they weren't exemplifying those things in their businesses."

Ricky Murphy, president of NuLu Business Association, said he has four Black nominees to serve as the committee chair. He is also hoping to bring in more Black board members.

"What the protesters are trying to accomplish is great," he said. "The way they gone about it I think they've done more harm to themselves and their mission than they have done good and I'm worried about that element of it."

Murphy said the NuLu community embraces justice and fairness and said he will commit to work towards change.

The Louisville Cuban community said it wants to show support for immigrant-owned businesses like Martinez's in the midst of protests and COVID-19.

"Fernando and his partners have always been willing to participate and are known for helping the community, but threats, extortion, and destruction will not bring people closer," organizers said in a statement. "They only sow more division."

The group will gather outside of La Bodeguita de Mimi to show support Sunday.