Scott Martin is the executive director of a non-profit River Heritage Conservancy, the group behind the park’s plans. He said the park will be “bold” with a focus on design and experience, to also meet the needs of the next century. 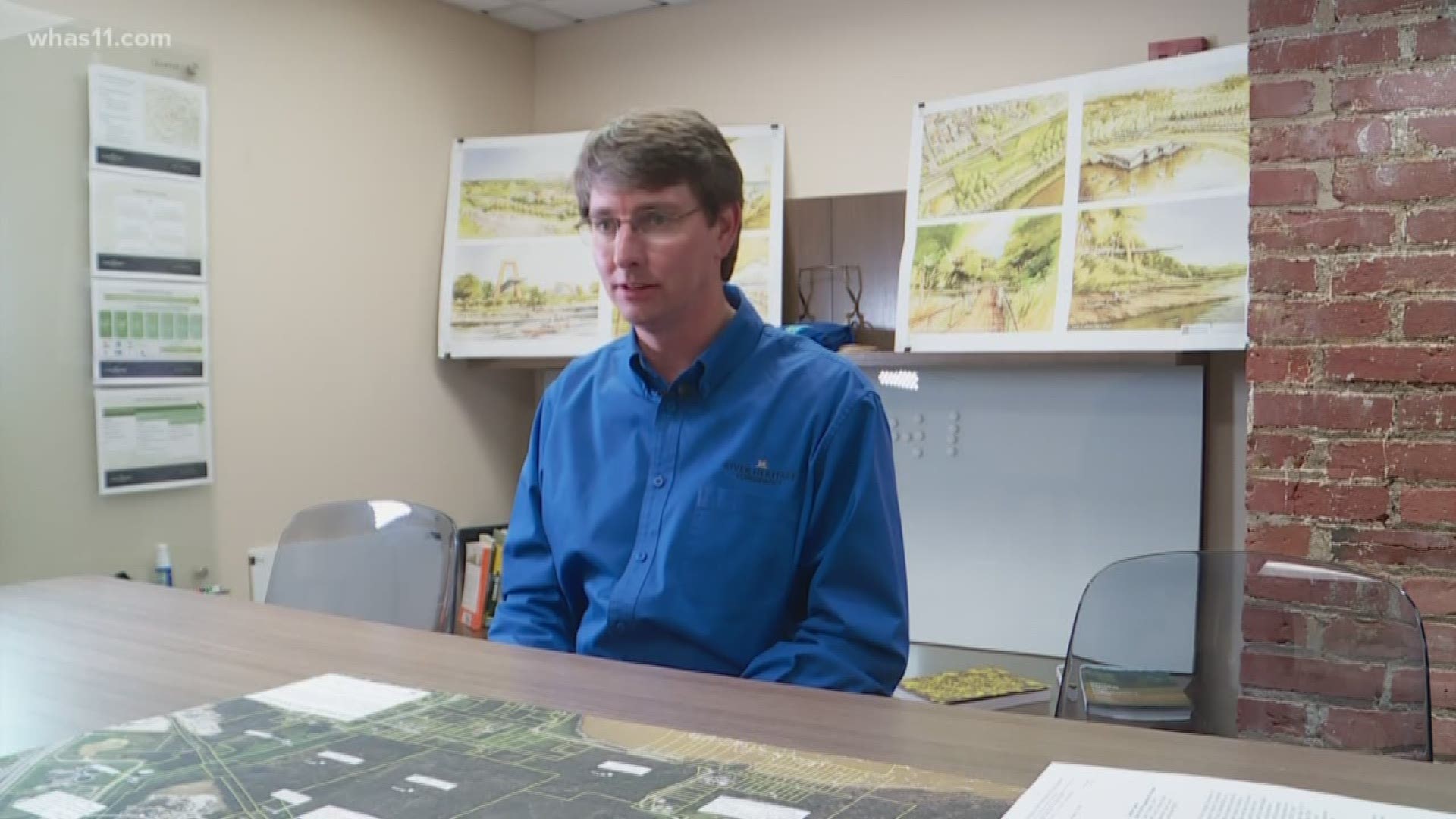 CLARKSVILLE, Ind. — Imagine a park over four times the size of Louisville’s popular Waterfront Park. That actually will become a reality on the riverfront of Clarksville, Indiana near the Falls of the Ohio. New plans unveiled Wednesday show the 400-acre park that the project leader says will be “unlike any other” park in the area.

Scott Martin is the executive director of a non-profit River Heritage Conservancy, the group behind the park’s plans. He said the park will be “bold” with a focus on design and experience, to also meet the needs of the next century.

"When you're playing in the park world in Louisville, this isn’t amateur hour,” Martin said. “We know it’s go big or go home when it comes to doing parks in our region.”

Martin said the design has to be of the “highest standard” for the Kentuckiana community, something the team has an opportunity to do because of the land’s size. The planned acreage is even bigger than Chicago’s Grant Park for comparison.

“Parks are wonderful, be they 1-acre, 2-acre, but there is something special you can do with design and experience when you get above that 100 to 200 hundred parcels, so that’s what we’re going to look at,” Martin said.

According to Martin, the location contains parts of the region’s history and what will be another unique attribute to the park.

“The park will connect communities in our region with a wild, historic, and neglected, section of the Ohio River.  Our region has always come together at this spot.  From the post-glacial seasonal migration of huge herds of buffalo and elk, to the Native Peoples that gathered for trade, to African-Americans seeking to escape bondage in the antebellum era, and finally the early industrialists and farmers whose boats and commerce braved the Falls to gain access to the global economy, this park will celebrate one of our nation’s most diverse, and culturally rich, landscapes,” Martin said.

The plans have been in the works for years already. RHC began acquiring land in 2017 and still hasn’t acquired all the land it hopes to have. There are still some operational businesses that would need to sell their land. A lot of the land is privately owned right now, so there isn’t 400 acres just set aside. Although, RHC said it is going to plan for the whole area.

“That’ll be ongoing for a long, long time. We will not condemn land. It has to be willing sellers and people just have to reach a point where they’re comfortable or want to sell. No one’s going  to be forced out, so we know that’ll take time as it goes, and that’s a natural part of this process.”

“We look for projects that we believe can make a big difference for a region, a neighborhood, a community and this is that project,” Lucinda Sanders, CEO of OLIN, said. “It’s an invitation to be bold.”

Sanders said the team of architects will spend a lot of time observing the site. She said they will likely have preliminary design plans within eight to nine months.

"The first thing you have to have is the plan. So the hiring of the architecture today to begin that work is what'll key off the timeline, the cost and everything else we know is coming,” Martin said, acknowledging people will have lots of questions regarding those things.

“We’ll do a series of engagements where we’ll talk to the community because you have to build a park that people actually want, so that’ll be our first step. And then a fundraising campaign will be announced.”

Martin said like with any other project, the team knows there will be challenges. One of the largest hurdles facing the group is something they plan to use to their advantage: flooding. The area of the planned park is prone to major flooding.

OLIN and RHC plan to create a park that incorporates flooding into the actual design.

“The flooding was one of those things we thought that rather than it be the thing that closes the site down, it becomes the event that people can come and engage with,” Sanders said.

"We project more and more water so we have to have a park that can be adaptive and resilient in the face of increased flooding,” Martin said. "This is one of the first real climate change-proof, if there is such a thing, parks in the middle of America."

Sanders said the landscape of the area is a challenge in itself, along with the flooding.

“It is an extremely disturbed site. There are landfills that have been capped, active landfills, junkyards, the land was agricultural land at one point, streams have been manipulated,” Sanders said. “One of the other challenges is the debris that comes along with that flooding and we have lots of questions about how to manage that.”

Martin said right now it is too early to even ballpark when the project will be complete or even break ground.