UofL will have to vacate wins and pay a fine, according to NCAA ruling. 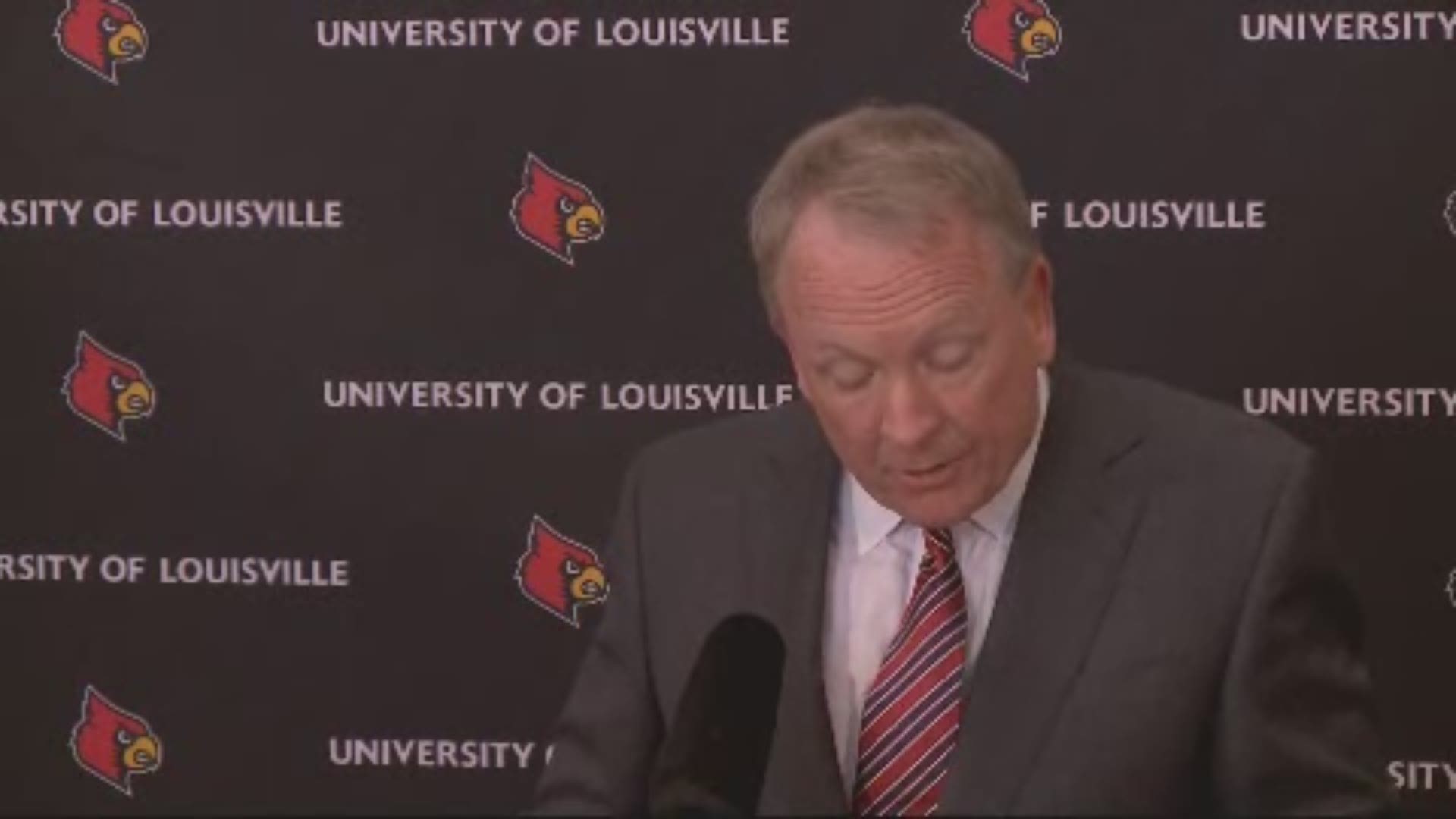 Postel called the NCAA infractions a dark cloud. He also said the NCAA ruling doesn’t take away any accomplishments of the basketball team or the joy they brought.

Interim Athletic Director Vince Tyra said, “What’s happened will not hold us back.”

Tyra said he will address the current men's basketball team at practice on Tuesday. The decision doesn't impact them, he said, and this team is focused on moving forward with this season.

During Tuesday's news conference, Tyra said he does not feel the NCAA punishment is appropriate to Louisville.

The 2013 banner that was hanging inside the KFC Yum! Center was removed within hours of the NCAA ruling. WHAS11's Holden Kurwicki said the 2013 championship trophy was also removed from the display case at Yum!

The doors at the Yum! Center are locked but I can see that the NCAA National Championship Trophy has already been removed. @WHAS11 pic.twitter.com/uaQyRMinzj

The NCAA released the following ruling:

"Louisville must vacate men’s basketball records in which student-athletes competed while ineligible during the 2011-12 through 2014-15 academic years according to a decision issued by the NCAA Division I Infractions Appeals Committee. The appeals committee also upheld the NCAA Division I Committee on Infractions penalty that requires the university to return to the NCAA money received through conference revenue sharing for its appearances in the 2012, 2013, 2014 and 2015 NCAA Division I Men’s Basketball Championships.

In the Committee on Infractions’ decision, the panel found that a former Louisville director of basketball operations acted unethically when he committed serious violations by arranging striptease dances and sex acts for prospects, student-athletes and others, and did not cooperate with the investigation. The violations in the case resulted in some men’s basketball student-athletes competing while ineligible.

In its appeal, the university argued the vacation of records and financial penalty should be set aside because they are excessive. The university contended that the penalties were based on participation of student-athletes who were not culpable in the violations, received negligible benefits as a result, and for whom reinstatement would likely have been granted.

The Committee on Infractions responded to the appeal by stating the penalties were appropriate due to the serious, intentional and numerous violations orchestrated by a university staff member for nearly four years. It further argued that student-athletes do not have to be culpable for the vacation penalty to be appropriate, and because the serious nature of the violations resulted in the participation of ineligible student-athletes, the vacation of records penalty was appropriate.

In its review of the case, the appeals committee found that because of the serious and intentional violations with direct involvement of a university staff member, the Committee on Infractions panel was within its legislated authority to prescribe the vacation of records and financial penalty. The appeals committee stated when student-athletes participate while ineligible, these types of penalties are appropriate. It also did not find the university’s argument about what could have happened during the reinstatement process compelling, stating there is no guarantee regarding the reinstatement process.

The members of the Infractions Appeals Committee who heard this case were Jack Friedenthal, professor emeritus at George Washington; W. Anthony Jenkins, attorney in private practice; Patti Ohlendorf, vice president for legal affairs at Texas; and David Williams, committee chair and vice chancellor for athletics and university affairs and athletics director at Vanderbilt."

"Coach Pitino will make a statement tomorrow. It's obviously disappointing to the players, fans and Coach. But when you needlessly fire the AD and Head Coach, denying the University its best defense, you've given the green light to the NCAA. To a large degree the current administration has to answer for this."

The following is a statement Postel sent to the students and staff at UofL:

Today the NCAA Infractions Appeals Committee upheld earlier penalties imposed on the University of Louisville, including vacation of victories from 2011 to 2015. That includes the 2013 national championship and the 2012 Final Four appearance.

I cannot say this strongly enough: We believe the NCAA is simply wrong.

We disagree with the NCAA ruling for reasons we clearly stated in our appeal. And we made a strong case - based on NCAA precedent - that supported our argument.

From Day One, the university has admitted that the actions of the former operations director and any others involved under previous leadership were offensive and inexcusable. That is why we apologized immediately, cooperated fully with the NCAA, self-imposed penalties that were appropriate to the offenses and made significant changes to ensure incidents like this never happen again. Under the NCAA's own rules, this cooperation should have been a factor in the severity of the punishment. Instead, it was ignored.

Like you, I believe the university needed to appeal the decision as strongly as possible. We brought in some of the best legal minds in the country, including the nation's top litigator, who helped develop and argue our case. This effort was costly both financially and in the time commitment. We felt, and still feel, that the young men who earned those victories and the thousands of fans who supported them deserved our best effort. The pain caused for our fans and the players who were not involved is perhaps the most regretful result of this decision.

This dark cloud has hung over our heads for more than two years, and it has had a negative impact on our athletics program, our fans and the entire university family. While we disagree with the NCAA's decision, it is time for the university to close this chapter and move forward with a stronger commitment to excellence on and off the court.

First and foremost, we are a university. However painful, this situation gives us the opportunity to turn the corner. We will move forward in an open, transparent and collaborative way. We will need your help to do so. 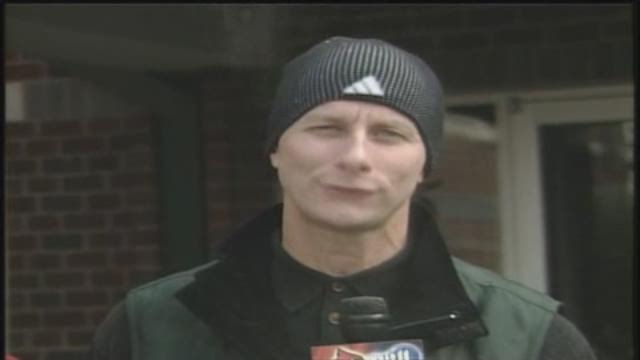 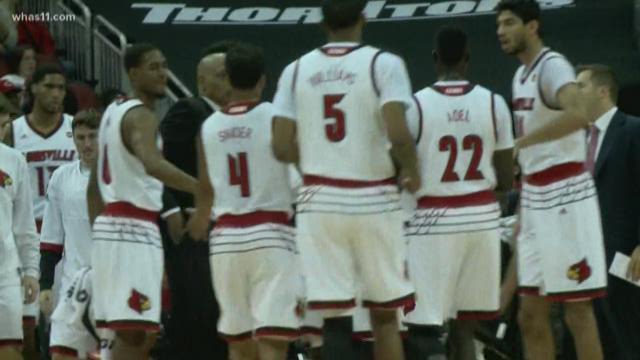 How do you feel about the NCAA decision? Weigh in on Facebook.