'Your leaders aren't afraid to perform hatchet jobs on you either': Fired LMPD detectives pen letter to officers

Detectives Myles Cosgrove and Joshua Jaynes wrote to LMPD officers, saying they have received death threats and have been forced to relocate. 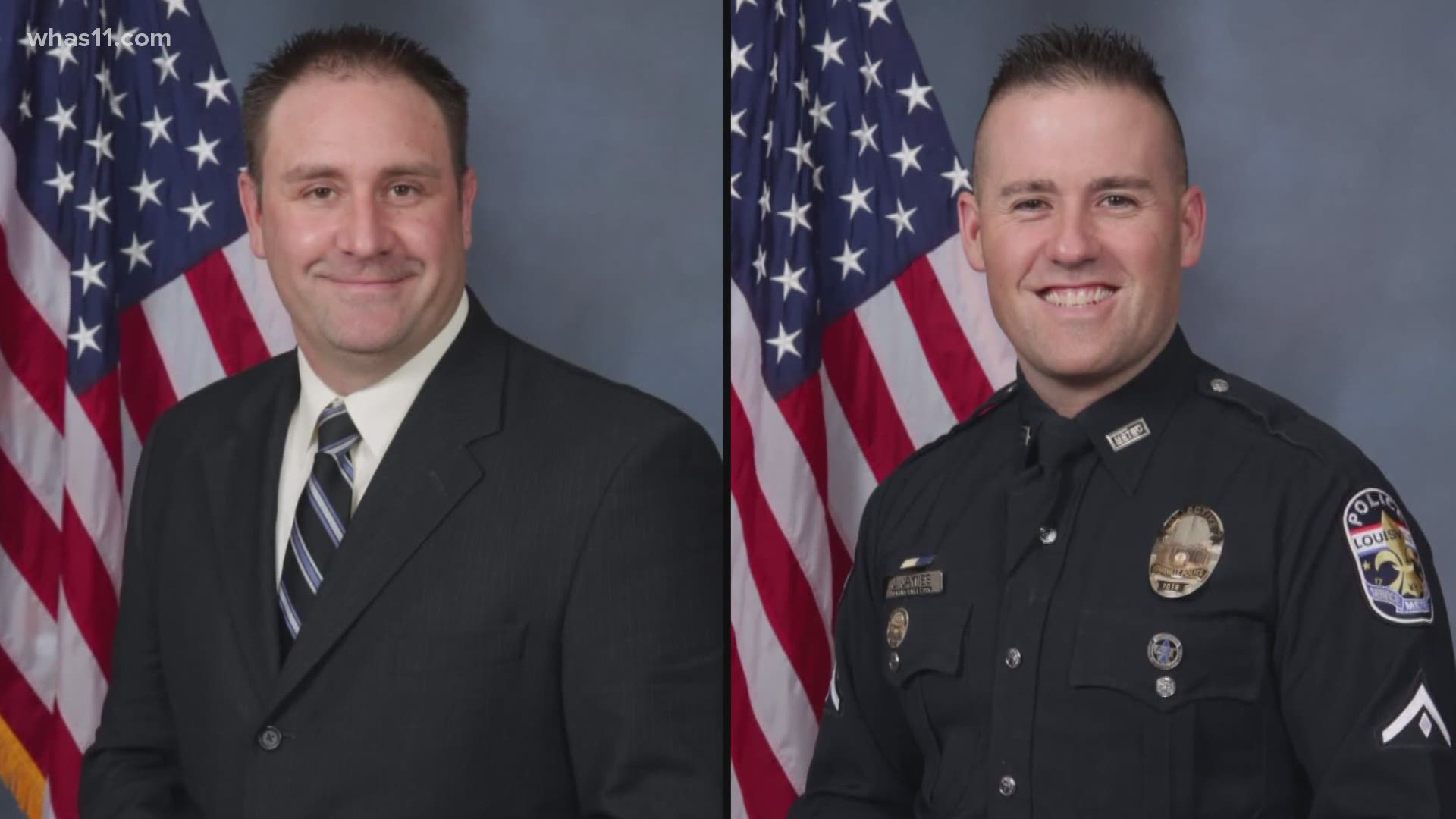 LOUISVILLE, Ky. — The two Louisville detectives fired for their involvement in the Breonna Taylor case sent emails to fellow LMPD officers Tuesday night, saying they were forced out "due to political pressure."

In his letter, Myles Cosgrove said that while interim Chief Yvette Gentry told officers she would "support any actions [officers] take in good faith" to protect themselves, that support did not extend to him.

"It seems our higher ranking officials will support us in our efforts to protect ourselves and others, just as long as there isn't a group of protesters or political pressures demanding otherwise," Cosgrove said.

Gentry will step down Jan. 19, as former Atlanta Police Chief Erika Shields takes the reins. Cosgrove wrote a warning to officers "still doing real police work," questioning why Gentry is terminating him and Jaynes before stepping aside.

"Your leaders aren't afraid to perform hatchet jobs on you either," Cosgrove said. "It's just a matter of time till you to (sic) will be a sacrificial lamb."

Cosgrove said his family has been forced to relocate and change schools due to death threats, and saying the media and posts on social media have lied and left out "important details with regards to this case."

"Because of the decisions made by your 'leaders,' my family is now left without health insurance during a global pandemic, my retirement benefits are up in the air, and I'm now tasked with gaining employment despite the damage done to my reputation," Cosgrove said. "Think about that the next time you put on the uniform and badge."

Cosgroves' attorney, Scott Miller told WHAS 11 News his client's termination is "disappointing and not consistent with policy." He said the officers were "met with gunfire and returned fire." He plans to file an appeal.

In a separate email, detective Joshua Jaynes said Cosgrove was correct in touching on "a lot of topics that I will not go back into," saying his nearly unblemished career is "being judged one line of an affidavit."

Gentry said Jaynes violated the department's standard operation procedure in his affidavit, lying about information that led to a search warrant of Taylor's apartment.

"My conclusion is that Det. Jaynes has been made a scapegoat in what happened in this operation because his conduct in this whole scenario was blameless," said Jaynes' attorney, Thomas Clay.

Jaynes claimed he had observed Glover running a "trap house" at a home on Elliott Avenue and believed Glover had been stashing drugs or money at Taylor's apartment to avoid detection from law enforcement.

No money or drugs were found at Taylor's home the night she was killed.

"Det. Jaynes told the truth as he understood it at the time he prepared that search warrant affidavit," said Clay, who argues Jaynes was relying on the word of another officer.

Jaynes said his family has also relocated, saying he has seen death threats against him and his family.

"Trying to keep these issues from my young children has been emotional and more than I can bear," Jaynes said. "The city has destroyed our lives, and they truly do not care."

Both Jaynes and Cosgrove said a majority of the community supports the police department, encouraging officers to stay safe.

"Stay vigilant, do you job and go home," Jaynes said. "Hug your loved ones and keep your circle of friends close."

Both Jaynes and Cosgrove have the opportunity to appeal the decision within 10 days. If an appeal for review is filed, the LMPD Merit Board will schedule a public hearing to review the action set forth in each letter.

The River City FOP released a statement about their termination that said:

"The FOP believes that the terminations of Detectives Cosgrove and Jaynes are unjustified. There is certainly no evidence in this case that policies and procedures of the LMPD were violated to the extent that warranted termination. Interim Chief Gentry not only made the wrong decision, but also sent an ominous message to every sworn officer of the Louisville Metro Police Department. The FOP will stand strongly and firmly with Detectives Cosgrove and Jaynes throughout the appeal process.  After conferring with our members and their attorneys, the FOP will have no further comment at this time.