The Bumblebee tunnel will help prevent wastewater and stormwater from overflowing during periods of heavy rain ultimately reducing pollution in the Ohio River. 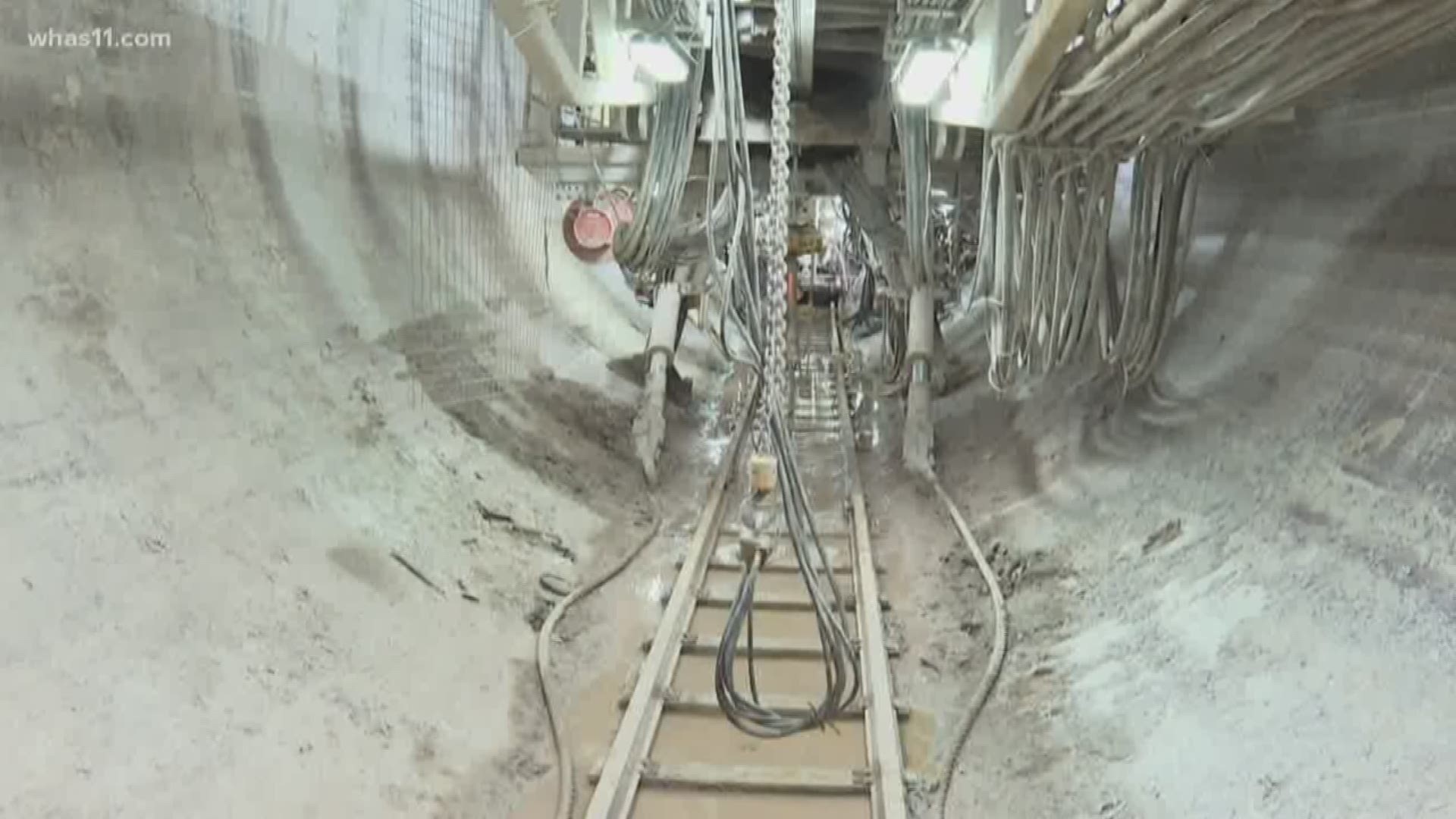 LOUISVILLE, Ky. — LOUISVILLE, KY – It is the city's largest infrastructure project you will probably never see but you will feel its benefits.

A massive drill is churning its way underground creating a tunnel ordered by the EPA to stop sewer overflows in Louisville.

"We're about 200 feet below ground and in the area of roughly 12th Street and downtown Louisville beneath the Ohio River,” MSD project manager Jacob Mathis said.

MSD invited members of the media Thursday to tour the tunnel that lies 18 stories below Louisville’s surface.

The massive tunnel boring machine is continuing to carve through bedrock to build MSD’s Waterway Protection Tunnel. Crews started work on the project in November 2017.

The machine nicknamed “Bumblebee” in honor of Louisville boxing legend Muhammad Ali, is 412-feet long weighing just under 900,000 pounds. Bumblebee has a stinging knockout punch—moving forward with 3.5 million pounds of thrust and applying nearly 1.5 million pounds per foot of torque. The boring machine has another feature in common with its namesake insect—antennae (small drills) that probe in front of its body to make sure it’s safe to move ahead. Two steel pipes, 3 ½ inches in diameter, threaded in 6-foot sections, extend at least 200 feet ahead of the machine to check for water and gases.

15 to 20 people below the surface of the derby city work around the clock.

"This project is a 5-day a week 24-hour day operation,” Mathis said. A lot of these people have homes outside of the Louisville area where their families currently reside so they may only go home once a month or every other month to see those families.”

The project is said to be an innovative solution to an environmental problem. MSD’s Waterway Protection Tunnel will help prevent wastewater and stormwater from overflowing during periods of heavy rain – ultimately reducing pollution in the Ohio River and Beargrass Creek.

"During a typical year, no more than a 10th of an inch of rain can cause our sewer system to reach capacity and overflow which sends untreated sewage to the Ohio River and local waterways,” Mathis said. "This project will capture overflow from 27 locations and up to 430 million gallons of overflow during the typical year."

The Waterway Protection Tunnel began its journey near 12th and Rowan Streets and is currently under the Spaghetti Junction as it cuts its way to Lexington Road and Grinstead Drive.

"With newer technology and new construction and materials this [boring machine] should well exceed its 100-year lifespan," Mathis said.

Bumblebee excavated about a mile and a half of the tunnel thus far. The boring machine rotates roughly six times per minute cutting through miles of solid bedrock. 300 trucks loaded with the limestone are hauled each day to re-purpose elsewhere.

According to MSD, Bumblebee has several sensors that sniff out any gases, and that automatically shuts off the machine should any of the gases be detected in levels over what is deemed safe.

The probes are like the left jabs Ali used to measure and time his boxing ring opponents before drilling them with a heavy right hand to deliver a knockout.

MSD continues work on three cave-ins due to aging infrastructure

Think before you flush! What MSD employees say are clogging their pipes