Standing in front of the crowd letting out a loud cheer, holding a warm smile, you would never think by looking at her that Rose Smith lost her son to gun violence. 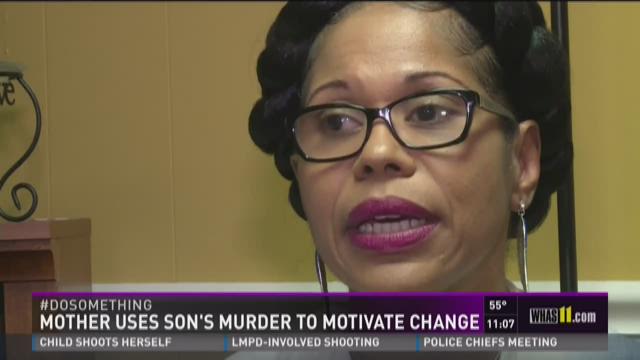 LOUISVILLE, Ky. (WHAS11) -- Standing in front of the crowd letting out a loud cheer, holding a warm smile, you would never think by looking at her that Rose Smith lost her son to gun violence.

“He's with me. I couldn't do this without him, and I tell you I wear my angel wings daily as a reminder,” said Rose Smith.

Her son, Cory Crowe was murdered two years ago. Since then, instead of retreating into depression, his mother has made it her mission to spread kindness in her community, starting with the little guys.

“What you feed grows, so if you feed these kids love, and compassion and stuff like that, it's going to flourish and grow with them,” said Smith.

She calls it the ACE Project.

“It was just his self-proclaimed name, ACE,” she explained.

For the last two years, she and about thirty kids have been doing 'acts of kindness.'

“We did shoe drives, pajama drives, coat drives. We do things. We go clean up the community,” she told WHAS 11 News.

They even served baby back ribs to LMPD officers, the very people investigating her son's killing.

“It's a requirement that they have to do community service with ACE Project,” Smith said.

Now, 25th and Standard, where Cory was killed, has been taken over by these compassionate messages created by the ACE members. She calls them peace flags.

“That's what we want, love, kindness, peace,” she said.

Rose can smile but in a moment's notice, it changes to tears as she still struggles with her own compassion for her son's killer.

“I got to be able to forgive, and I will, I’m going to do it with everything I've got,” she said.

Smith told WHAS11 News that Cory went to Murry State, then returned home and was in school to become a barber.

Metro Police found Cory Crowe, 24, shot several times inside a car on South 25th Street in the Park Hill neighborhood. No one has ever been arrested for Crowe's murder.