"I think the voice will uplift her and will serve as her guide and encouragement while I'm not around," said Thierry Reynolds. 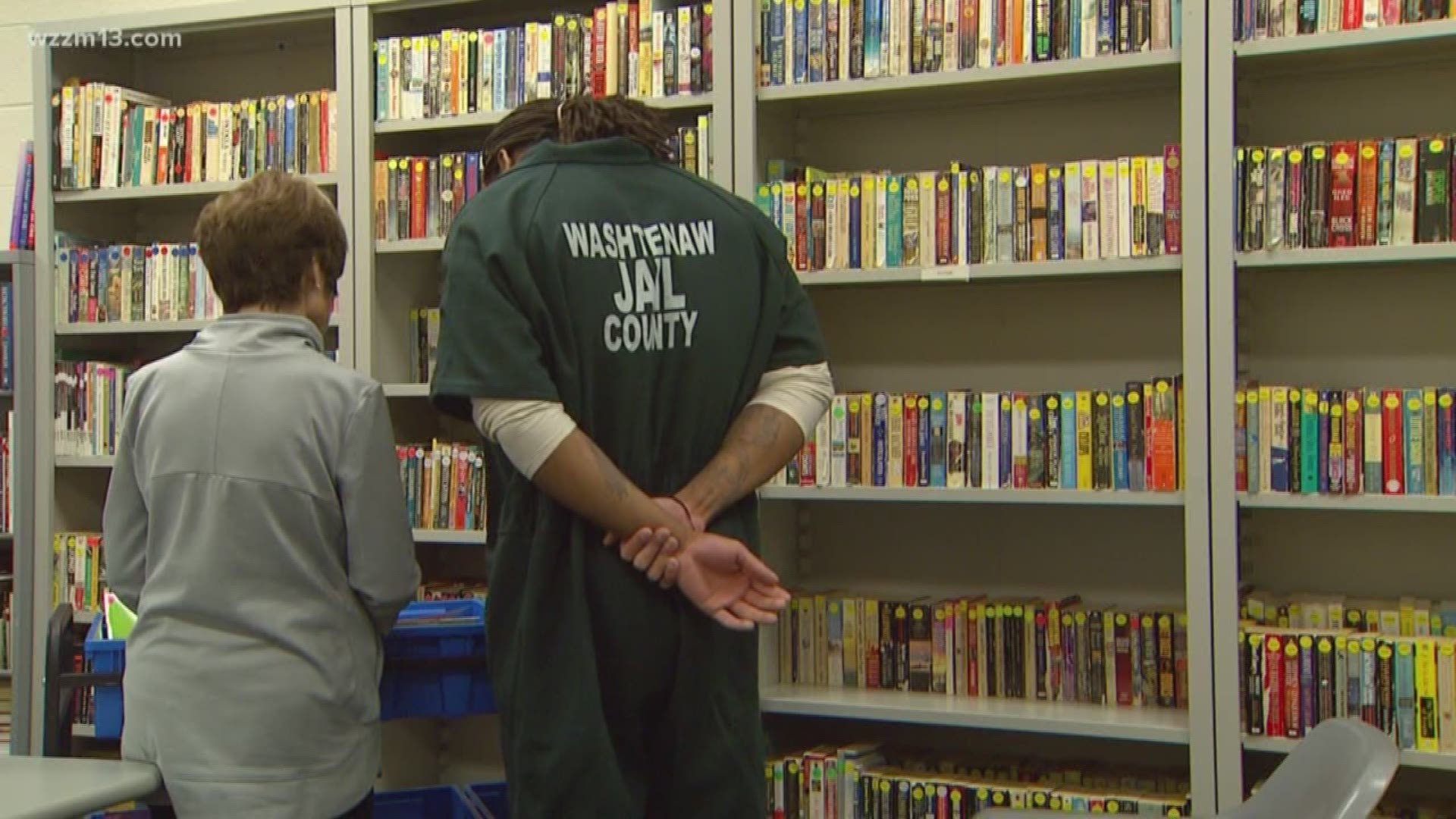 ANN ARBOR, Mich. — Teaching children to read is a time-honored challenge, but it's all the more difficult when a parent is behind bars.

Improving literacy for kids who may have one or both parents in prison, is the goal of a program called Staying in Closer Touch.

Research shows that the inability to read and write goes hand-in-glove with making poor choices which can lead to criminal activity.

"We can be experts at running a correctional facility and housing people, but if we're going to have building strong and sustainable communities be a part of our mission, then we're obligated to do something about that," said Renee Wilson, Director of Community Corrections for the Washtenaw County Sheriff's Office.

Childhood can be affected by many factors that could prevent success later in life, but having a parent in prison can have an effect that's more profound than most.

It goes without saying that parents need to be involved in their children's lives. That includes making sure they have the ability to read.

"I have a desire to help children learn to read," said Bonnie Schramm, who spent her entire 40-year career in education, and is currently a volunteer for the Children's Literacy Network. "For families in at-risk populations, there gets to be that cycle of not being able to read, which can cause a lack of self-confidence, then poor choices."

According to reports, children of incarcerated parents tend to have below-average literacy rates. Statistics show 75 percent of U.S. inmates are functionally illiterate, and more than 800,000 state and federal inmates have children.

According to a study done by Rutgers University, one in 28 children in the United States have an incarcerated parent—that's a grand total of 2.7 million children.

"The cycle needs to be broken," Schramm said. "To unlock the written word can be incredibly powerful."

The trauma of the separation between the child and the incarcerated parent can be damaging to the child, both from a mental health and educational aspect.

From inside the prisons, Schramm says that same emotion and outlook exists with the inmates, too.

"The inmates say, 'Do my children remember me; do they still love me,'" said Schramm.

Those who work in the prison system are always looking to provide programs for inmates, helping them build toward re-entering society and reconnecting with family and friends.

"We recognize that families, specifically children, can be victims when a parent is incarcerated," said Wilson."We do all we can to foster family reunification and keep an avenue to communication open."

Six years ago, Schramm, along with fellow volunteers from the Children's Literacy Network in Ann Arbor, set out to create a program where children of an incarcerated parent could have that parent read to them from behind bars.

The program is called Staying in Closer Touch.

Credit: WZZM
When Bonnie Schramm arrives at a prison. she loads up her bin with books then spends time visiting with inmates to see if they want to read.

"I visit a jail or prison every Tuesday, fill a cart with children's books and novels, then approach inmates asking if they'd like to participate," said Schramm. "I found that many inmates come from environments where reading wasn't valued or encouraged, so how can they place a value on it for their children.

If the inmates choose to participate in the program, they're brought into a room, they pick the book they'd like to read to their child, then Bonnie records them while they read. She transfers their audio onto a CD, then mails it to the inmate's child so the child can listen to their parent reading to them.

"The reading lasts for about ten minutes," said Schramm. "When the inmate finishes, I ask them to they say something to their child.

"There are a lot of tears, and sometimes the inmates have a hard time finishing."

Not all of the inmates want to participate, but the ones who do consider it to be a life-changing experience—one that could serve to salvage fractured relationships on the outside.

"Bonnie approached me, and the moment I heard about it, I knew it was exactly what I needed in my life at that point," said Thierry Reynolds, 32, who was sentenced to a year in the Washtenaw County Jail for fleeing and eluding the police. "My daughter and I used to read together a lot before I ended up in here, so I saw this as a way to continue that.

"Doing this reading will let her know that I'm trying no matter where I'm at."

Schramm had Reynolds read into her recorder, then burned his audio to a CD, then delivered both the CD and a copy of the book to Thierry's house so his daughter, Faith, could listen to it whenever she wanted.

"It was pretty sad and upsetting that he has to go somewhere where I can't see him," said Faith, 10, before she listened to her father's recording. "Reading is something I like to do with him."

Credit: WZZM
Faith Reynolds, 10, reads along with her father, Thierry Reynolds. Thierry's voice is playing on the CD player because he was reading from jail.

As Faith started listening to the reading, she was able to follow along with her father in the book.

"It's good to hear him like this because we're reading together just like we usually do when he's here," said Faith, once the recording ended.

Thierry Reynolds was released from jail on Dec. 16, 2018. He's hopeful that he can reunite with his family, which includes Faith and his girlfriend Margaret Gillespie, Faith's mother.

"There's still time," said Gillespie. "It's not too late. [Thierry] needs to play a part in [Faith's] life."

Thierry's family has a great chance at reconciling, thanks to reading.

Credit: WZZM
Faith Reynolds (Left) and her father Thierry (Right) read together a few days after Thierry was released from jail.

"Those of us in the system are here to help restore people," said Wilson. "[We hope to restore them] better than what they were when we received them, when we release them."

"The power of literacy is immeasurable," said Schramm. "For families in at-risk populations, there gets to be that cycle of not being able to read and not feeling confident about yourself and making poor choices.

"I think literacy is one of the keys to unlock that."

If you know of a story that should be featured on "Our Michigan Life," send a detailed email to 13 ON YOUR SIDE's Brent Ashcroft: life@13OnYourSide.com.