"There's no way she'd be alive right now if she didn't have this prosthetic." - Sonny Grendel 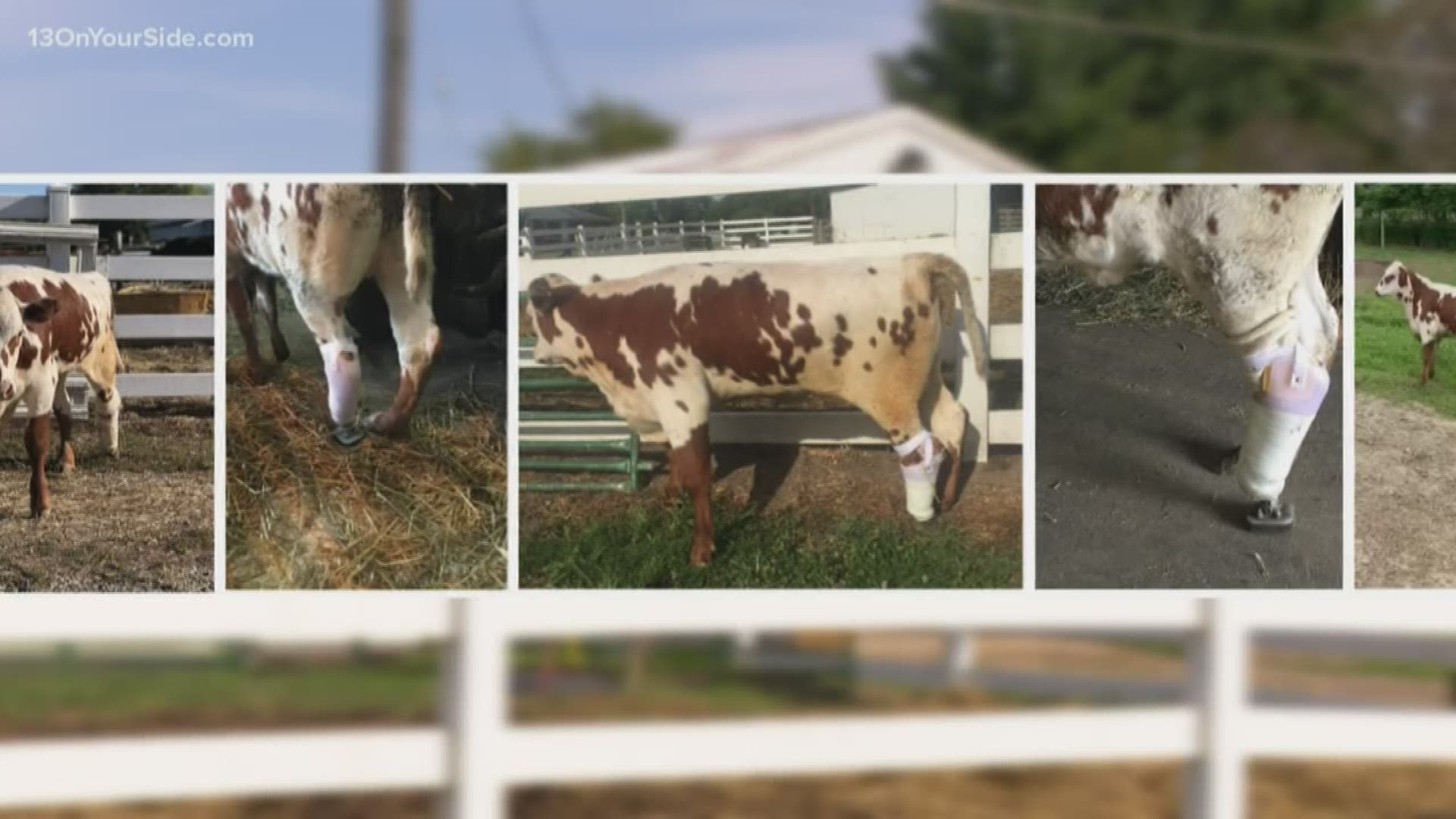 CHARLOTTE, Mich. — When a human being suffers a debilitating injury, often times the only option the patient has is amputation, followed by months of grueling rehabilitation with a new prosthetic limb.

What if you replace the human with a cow?

Would the result be the same or different?

Artificial limbs for livestock are a rarity, for sure, but thanks to an out-of-the-box approach from a Michigan prosthetist, a newborn calf has a fake leg and will avoid being euthanized.

It all began in Charlotte, Mich. on Christmas Day, 2018. Nancy and Kevin Fullerton, the owners of Fullerton Farms, were expecting the birth of a baby calf.

Credit: Sonny Grendel
Charlette was born at Fullerton Farms in Charlotte, Mich. on Christmas Day 2018. Soon after, the calf showed signs of not being able to stand or walk.

"Charlette was born with seemingly no problems," said Sonny Grendel, who is Kevin and Nancy's daughter. "Charlette's mother, Matilda, didn't have any problems having her."

A few days after Charlette was born, Sonny and her parents began to see that the calf was having problems standing and walking.

Credit: Sonny Grendel
Soon after she was born, Charlette lay in the pasture on Fullerton Farms. Within days, the Fullertons realized the calf couldn't stand or walk.

"Charlette was never able to fully weight-bare on her hind, left leg," added Grendel. "We have over 200 head of cattle on our farm, so we think that maybe another cow may have stepped on Charlette's leg, but we'll never be certain of that."

Grendel, who is an occupational therapist, specializes in helping people recover from injuries so she tried to come up with ideas to help Charlette.

"My parents and I started with some physical therapy with Charlette," said Grendel. "We worked on stretching out the tendon in her leg and making molds for her leg to help cast it.

The next step for Grendel and the Fullertons was to contact a local veterinarian to come out to the farm to examine Charlette and help the family determine more options.

"The vet told us that Charlette would have to have her leg amputated," said Grendel. "Blood basically stopped circulating through her foot so taking her leg from just below the knee was what needed to be done."

Grendel added that the veterinarian also told the family that amputation would extend Charlette's life but as she grows, she'll need that leg to be able to hold her up as her weight increased.

"After the surgery, Charlette's stump area healed nicely," said Grendel. "But she was unable to get around and eat."

That's when Nancy Fullerton decided to get creative and tapped into her 'inner MacGyver.'

Credit: WZZM
Nancy Fullerton decided to make Charlette a homemade prosthetic. She used a stack of plastic cups, duct tape and a coozie with the bottom cut out.

She made a prosthetic leg with random items from around the farm.

"My mom stacked a bunch of plastic cups on top of each other, duct taped the cups together and cut the bottom out of a coozie," said Grendel. "It fit right on Charlette's stump."

Charlette was able to walk with the make-shift leg, but there was no way of keeping it on the cow's leg.

"It kept popping off," said Grendel. "But having it kind of gave us our first idea that maybe a [real] prosthetic might help her."

It was at that point that Grendel remembered she had a friend when she attended college at Western Michigan University who went on to be a prosthetist.

"I contacted my friend Jay Miller and asked him if he had any ideas or knew of anybody he could refer me to," said Grendel. "Without batting an eye, he said, 'I'll make it for you for free.'"

In the spring of 2019, Miller paid a visit to Fullerton Farm where he took measurements of Charlette's leg and alignment and also made a cast.

"I've made hundreds of prosthetics for humans but Charlette is my first animal," said Miller, who works out of South Lyon, Mich.

Once he got all the information he needed from the cow, Miller went back to his lab and began creating the limb.

"A cow's hind leg is almost how our human elbows bend and work," said Miller. "So I was able to use an elbow design. 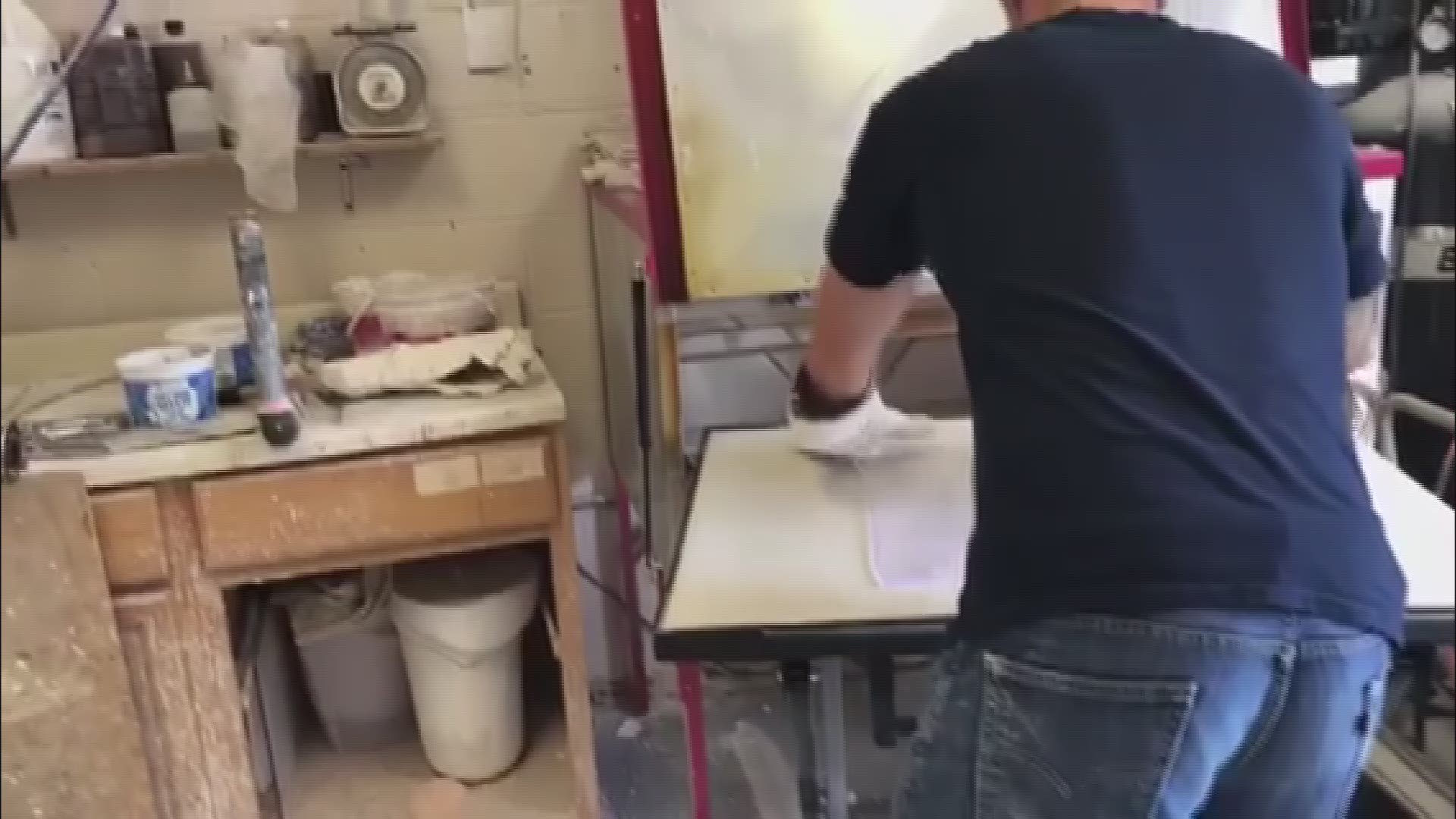 "For alignment, I actually had to use more principles from above the knee for a human just because of how the weight lines fall.

"The trickiest part was getting the weight line correct because cows are on four legs and their weight distribution is a little bit different."

Two weeks later, in early June, Miller returned to Fullerton Farm with a prosthetic leg for Charlette. He says once he put the leg on, what happened next was beyond his expectations.

"Unlike a person, the cow just got right up and started walking like [the leg] had always been there," said Miller. "Seconds after that, Charlette began trotting around the barn then running and jumping out in the pasture." 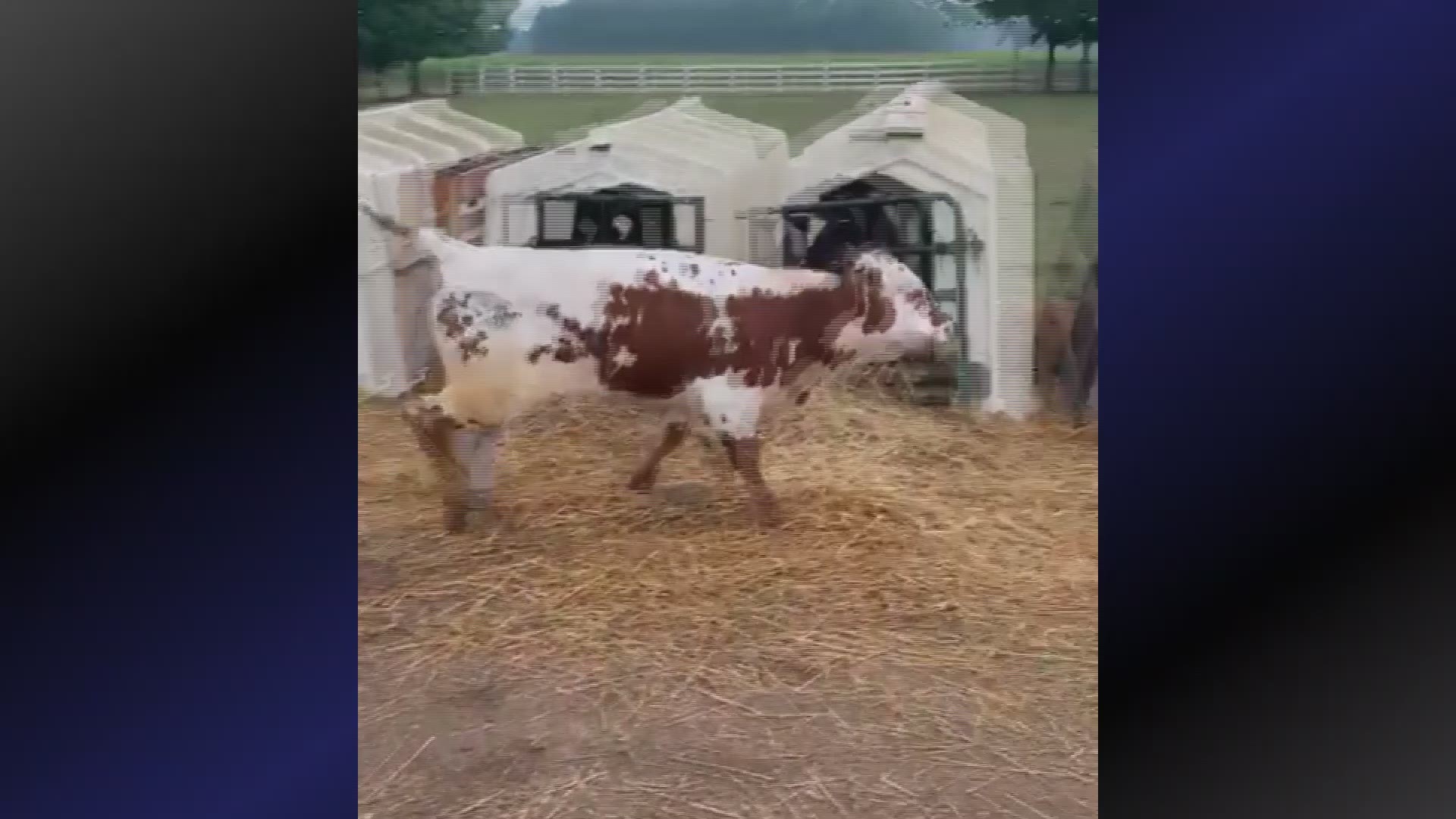 Miller says his goal with the prosthetic was to allow the cow to stand and properly balance her weight so she could eat on her own. Instead, his creation gave Charlette a new lease on life.

"It was just amazing," said Grendel, who was there to witness Charlette's overwhelming excitement. "She literally took off running and had no fear.

"She ran out to where the other cows were and started mingling with them."

Charlette's new limb added a new daily responsibility for the Fullertons. When Nancy gets up every morning at 5 o'clock, the first thing she does is go out to the barn and put the leg on Charlette and at the end of every day she takes it off.

"My mom has to keep a close eye on Charlette's skin to make sure there are no sores developing from the prosthetic rubbing," added Grendel. "So far, there have been no issues and Charlette is as healthy as the other cows."

As Charlette continues to grow and gain weight, she'll continue to need updated prosthetics. She's due to get a new one at the end of this year, and Jay Miller says he'll keep making them as long as she keeps needing them.

"I'm just glad I could help," said Miller. "The Fullertons are thrilled and the whole experience has been very rewarding."

"There's no way [Charlette] would be alive right now if she didn't have this prosthetic," added Grendel. "I just can't thank Jay [Miller] enough for all he's done.

"Hopefully after Charlette turns a year old she can get bred and have a baby of her own that can grow up on our farm."

If you know of somebody or something that should be featured on "Our Michigan Life," please send a detailed email to 13 On Your Side's Brent Ashcroft: life@13onyourside.com.