McConnell remarks on Senate floor before voting to advance nomination

McConnell delivered these remarks on the Senate floor on Oct. 5 before the Senate voted to advance the judges nomination. 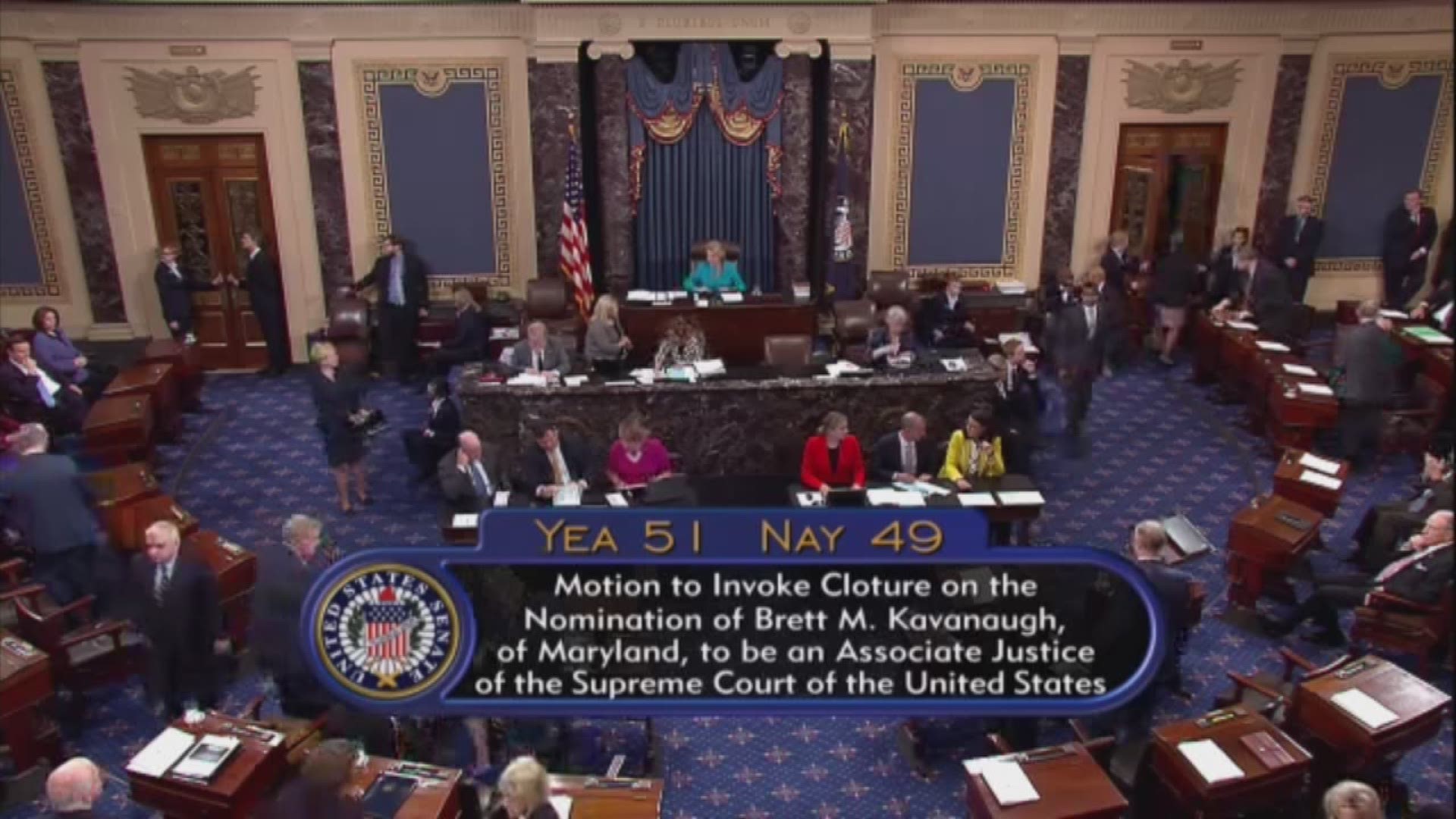 “It was 88 days ago that President Trump announced his nomination of Judge Brett Kavanaugh to fill the current vacancy on the Supreme Court. Judge Kavanaugh is a nominee of the highest caliber -- a brilliant legal mind and an accomplished jurist with a proven devotion to the rule of law. Today, the Senate has the opportunity to advance his nomination. Every one of us will go on the record with one of the most consequential votes you ever cast in the Senate. The stakes are always high for a Supreme Court nomination. But, colleagues, the extraordinary events of recent weeks have raised them even higher this time.

“When we vote later this morning, we will not only be deciding whether to elevate a stunningly-qualified judge to our highest court. Not anymore. Not after all this. The United States Senate will also be making a statement. We will either state that partisan politics can override the presumption of innocence. Or we will reaffirm that, in the United States of America, everyone is innocent until proven guilty.

“We will either state that facts and evidence can simply be brushed aside when politically inconvenient, and signal that media bullying and mob intimidation are valid tactics for shaping the Senate. The mob can attack, and the Senate caves. Or we will stand up and say that serious, thoughtful, fact-based deliberation must still define this body. We will either give notice that totally uncorroborated allegations are now, officially, enough to destroy an American’s life. Or we will declare that our society cannot, must not, will not, set the bar so low.

“So, today is a pivotal day in the nomination process of this excellent judge. But it is also a pivotal day for us here in the Senate, and for the ideals of justice that have served our nation so well for so long. Let’s step back, and sample a few of the choice moments that the Senate and the American people have been treated to during the disgraceful – absolutely disgraceful -- spectacle of recent weeks. The very night Judge Kavanaugh was announced as the president’s choice, we heard the junior senator from Oregon declare that this nominee would ‘pave the path to tyranny.’ His audience? Crowds of far-left protesters, still filling in the blanks on their picket signs. They weren’t quite sure who the nominee was going to be yet.

“We have heard the junior senator from New Jersey describe Judge Kavanaugh’s nomination as a great moral struggle in which there are really just two camps. Quote: ‘You’re either complicit in the evil… or you are fighting against it.’ More recently, we’ve heard the junior senator from Hawaii argue that her personal disagreement with Judge Kavanaugh’s judicial philosophy meant he deserved less of a presumption of innocence when it came to allegations of misconduct. That’s right, from a member of the Judiciary Committee: Due process? Only if you think like she does, apparently.

“And even more recently, we saw the junior Senator from Rhode Island hold forth with great confidence, offering his expert interpretations of goofy jokes in a high-school yearbook from the early 1980s. That was incredibly enlightening. Innocent jokes? Beer-drinking references? Oh, no. Our colleague was quite positive there were other hidden or sinister meanings at play. Until, of course, a number of Judge Kavanaugh’s classmates set him straight earlier this week. Stop and consider these snapshots. The absurdity. The indignity. This is our approach to confirming a Supreme Court justice? This is the Senate’s contribution to public discourse?

“Before the ink had dried on Justice Kennedy’s retirement, our Democratic colleagues made it perfectly clear what this process would be about: Delay, obstruct, and resist. And before the ink had dried on Judge Kavanaugh’s nomination, colleagues across the aisle -- including Democrat members of the Judiciary Committee -- were racing to announce they’d made up their minds and were totally opposed to his confirmation.

“Mere hours after Judge Kavanaugh was nominated, my friend the Democratic Leader promised -- quote -- ‘I will oppose him with everything I’ve got.’ Hours after he was nominated. It was thus abundantly clear that his number one political goal was to defeat the nomination by any means necessary. It was right there from the beginning. A clear declaration, plain as day. Nothing -- nothing -- could get most Democrats to consider this nominee with an open mind. It would be delaying tactics, obstruction, and the so-called ‘resistance’ until the final vote was called.

“For a few weeks, their efforts played out along lines that have sadly become somewhat ordinary around here. There were excuses for delay that fell flat. There were gross distortions of Judge Kavanaugh’s record that were batted down by outside fact-checkers. And there were all the usual phony apocalyptic pronouncements that are shouted whenever a Republican president dares to nominate a Supreme Court justice -- hostile to women, hostile to vulnerable people, hostile to workers. The same old tricks. The same old playbook.

“But here was the problem: The old plays weren’t working. The distortions were being drowned out by the facts. Senators received and reviewed more pages of background materials on Judge Kavanaugh’s nomination than for every previous Supreme Court nomination combined. We read Judge Kavanaugh's twelve-year record of judicial rulings from our nation’s second-highest court -- 300-plus opinions. We heard sworn testimony and written accounts from hundreds of character witnesses, from all stages of Judge Kavanaugh’s life and career. And the picture painted by these facts was nothing like the caricature. So it was clear the old tactics weren’t working. The ‘resistance’ demanded more. Try something new, they said.

“Well, we all know what happened next. Uncorroborated allegations of the most sensitive, most serious sort were quickly sharpened into political weapons. One such allegation, shared by Dr. Ford in confidence with the Democrat side of the Judiciary Committee, somehow – mysteriously -- found its way into the press. Well, Chairman Grassley immediately set out on a sober, focused search for the truth. The Committee collected testimony, organized a new hearing, and most recently, asked for the supplemental FBI background investigation. Judge Kavanaugh’s seventh. Seventh FBI investigation.

“By any fair standard, the facts -- the actual facts -- proved to be straightforward. No corroborating evidence, none, was produced to support any of the allegations leveled against Judge Kavanaugh. No corroborating evidence from the FBI inquiry, or from anywhere else. Nothing. Well, that wasn’t enough for our Democratic colleagues, of course. The facts were not exactly the point. When the very FBI investigation for which they’d been clamoring turned up no new evidence, Democrats moved the goalposts yet again.

“The people whom Dr. Ford claimed were witnesses? They have spoken with the FBI. We know that because they, through their attorneys, put out public statements saying so. And what we know now is what we knew at this time last week: There is absolutely no corroborating evidence for these allegations. The same thing we heard a week ago. If there were, you bet we’d have heard about it. But there isn’t.

“Notwithstanding that, the leak of Dr. Ford’s letter -- in violation of her privacy and against her wishes -- opened the floodgates. The feeding frenzy was full on. The weaponization of her letter by the left led to a torrent of other, equally uncorroborated allegations. They were dumped on Judge Kavanaugh and his family. And, breathlessly, the media seized on them -- the more outlandish, the better.

“And, yes -- we were informed that juvenile jokes in his high-school yearbook were actually sinister secret references. Oh, the Keystone Cops were on the case. And Senate Democrats cheered them on. They read parts of this uncorroborated, unbelievable mudslide into the Senate record. They cited them in an official letter, demanding that Judge Kavanaugh’s nomination be withdrawn.

“Were they true? Well of course, that was quite beside the point -- so long as they were convenient. Every effort was made to ensure that the fact-free verdict of the mob and the media would win out over the actual evidence. Made sure the mob prevailed. But the uncorroborated mud, and the partisan noise, and the physical intimidation of Members here in the Senate will not have the final say around here. The Senate will have the final say.

“So, we’re almost at the end of the runway. The crosswinds of anger and fear and partisanship have blown strong, these past weeks. They have harmed a good man and his family. They’ve tarnished the dignity of our institution. But all of it can end today. The time has come to vote. The Senate stands on the threshold of a golden opportunity.

“Today, we can send a message to the American people that some core principles remain unfettered by the partisan passions of this moment. Facts matter. Fairness matters. The presumption of innocence is sacrosanct. The Senate has turned its back on these things before. But never for long, and never without deep regret. This institution does not look back proudly on the era of Joseph McCarthy. Nor on any of the other times when the politics of personal destruction poisoned its judgment. No, the Senate looks back on these things with shame -- and with the conviction that we cannot go down this road again.

“We know the Senate is better than this. We know the nation deserves better than this. By confirming Judge Brett Kavanaugh to the Supreme Court, this brilliant jurist will be charged with upholding the rule of law and honoring American justice. We must hold ourselves to that very same standard. We must seize the golden opportunity stands before us today. To confirm a Supreme Court Justice who will make us proud. And to reaffirm our own commitment to the justice that every single American deserves.”