The shortage comes at a bad time, with more people returning to restaurants after getting their vaccines. 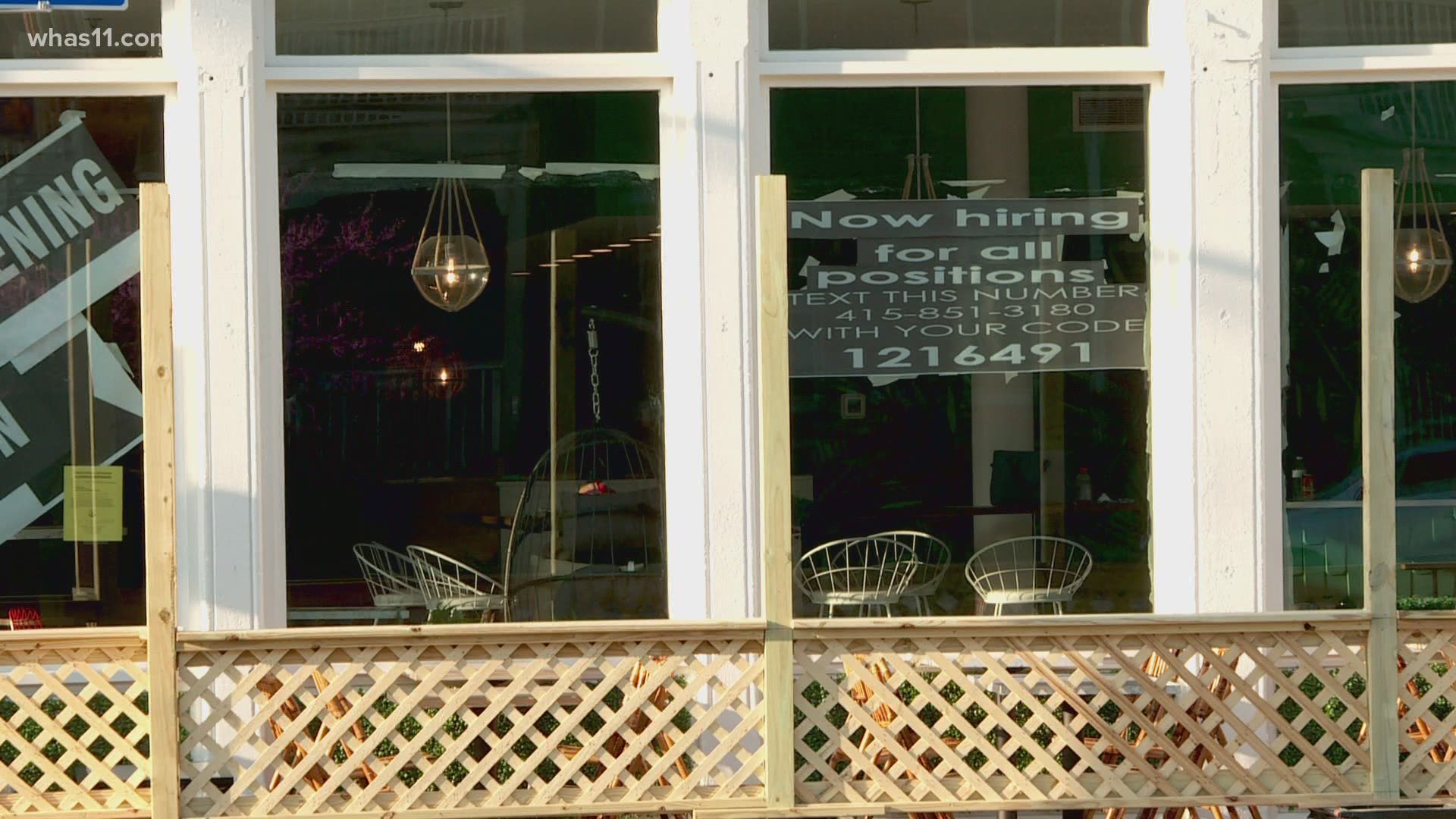 Owner and Chef Nichelle Thurston spent Tuesday training her staff and finalizing details before the grand opening on Jefferson St. But she said finding that staff wasn't easy, which is why hiring signs remain plastered on the restaurant's front windows.

"So many other restaurants are going through and experiencing the same drought of employees that a lot of employees with great talent are already employed or they're not looking," Thurston said.

They've hired about 75% of the staff they need, enough to get them through the first month. Thurston said she still needs 11 positions filled. Even getting the staff she has took longer than expected and jobs are still posted.

"The opportunities are there. There's a lot of ways to make really good money with a flexible schedule in our industry," Stacy Roof said.

The shortage comes at a bad time, with more people returning to restaurants after getting their vaccines. Stacy Roof with the Kentucky Restaurant Association said there could be many reasons behind the hiring struggle.

She said some workers don't have childcare, with kids still in school at home. Others were laid off during the pandemic and found new jobs, while some are staying on unemployment, or have switched industries.

"We need skilled professionals to come back and fill their spots that unfortunately were left open last year with all the openings and closings and back and forth and all of that, but we're ready for them and hope they come back in droves," Roof said.

Roof said it's not just a Louisville issue, but a statewide and nationwide problem as well.

"I think that probably goes for most industries. A year is a long time to have been going through this. I don't think any of us thought this would be more than a couple of months that we would be dealing with the pandemic. So when it took us through the summer and fall, I'm sure there are people who found other ways to make a living that they enjoy or is flexible like a restaurant opportunity would be," Roof said.

"We're hopeful that well get a timeline form the governors office to let us know what to plan for," Roof said in terms of finding out when restaurants will operate normally again in Kentucky. "We need people now. We needed people last week, we'll need more people next month and the months beyond so wed love to be able to plan for that."

Credit: kichigin19 - stock.adobe.com
serving in the restaurant, fork and knife / interior view of the restaurant with a table served knife and fork on the table in a cafe

The staffing shortage even closing an area restaurant, Portage House, in Jeffersonville. Owner and Chef Dallas McGarity wrote in a Facebook post, "We've been unable to find staff for many months now to join our already small team -- hopefully we will be able to reopen soon."

"It's really bad. It's come to a point where I've had to think about closing some days or changing my business hours or shortening my business hours. Thankfully we made it though that bad of a point," Thurston said. "It's been fluctuating and it's been a little bit better but not exactly where it needs to be."

Both Thurston and Roof encourage customers and diners to give restaurants a little grace.

"We're new and were working a little bit understaffed," Thurston said. Just be a little patient with us and we'll get it right."

"I'm getting really excited and nervous," Thurston said. "We actually started not too far from this area in 2015 so we're really excited to come back and NuLu is growing really fast at a rapid pace so this community is a good space."

The grad opening of the restaurant at South Hancock and East Jefferson Streets will be held Saturday, April 10. It will include a red carpet, flame throwers, face-painting, and door prizes. Thurston said the mayor will also be apart of the opening Saturday at 1 p.m.