Louisville Metro to require masks in all government buildings

Fischer said city officials anticipate Jefferson County reaching "red" status by Monday. But not all councilmembers agree with the timing of the move. 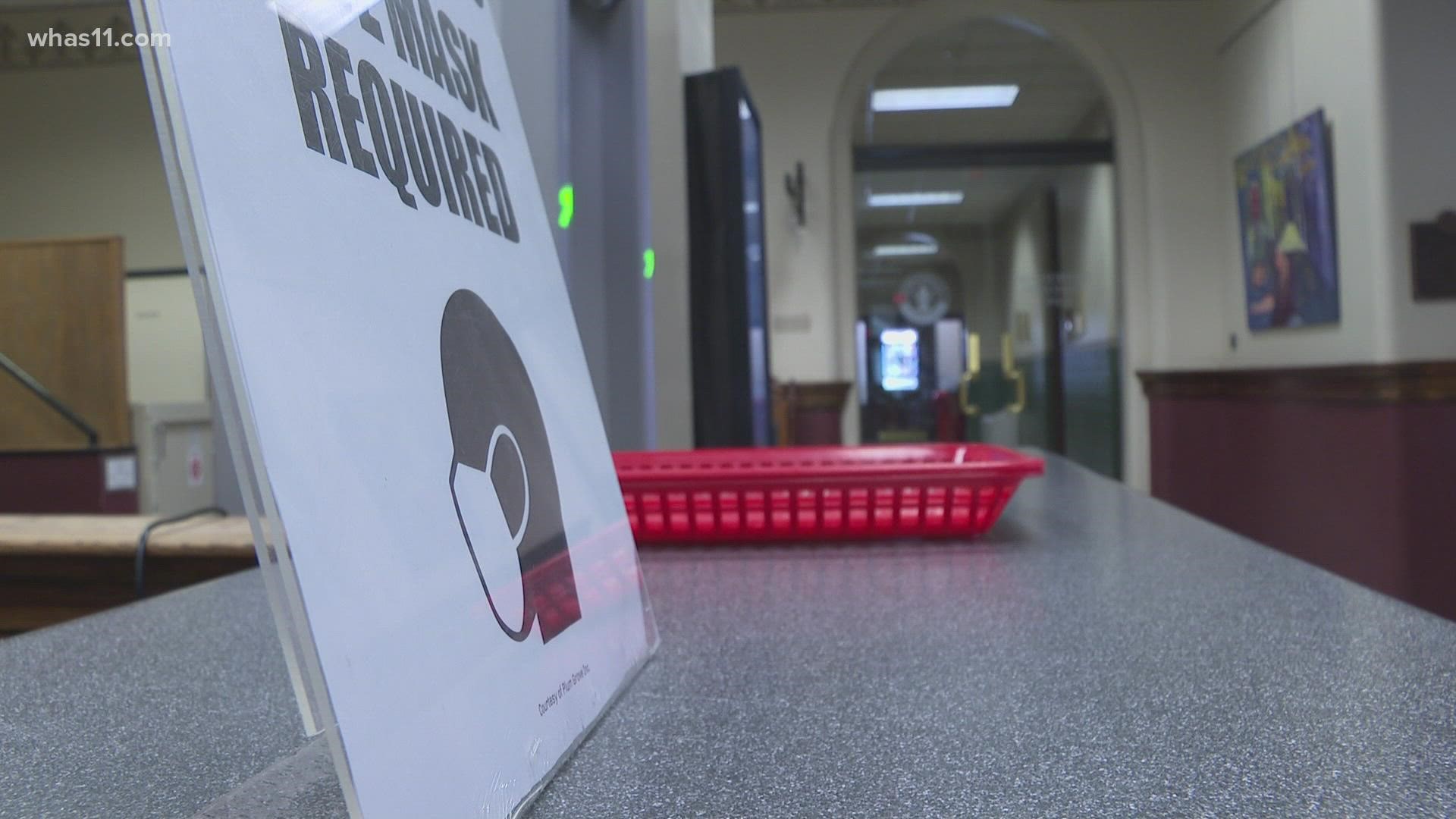 The decision comes after the Centers for Disease Control and Prevention provided new guidance for counties with substantial or high transmission of COVID-19. The CDC now recommends all persons wear masks indoors, regardless of vaccination status.

"We’re at a point we’d hoped to avoid through vaccines, which are safe, highly effective at stopping serious illness and death from COVID-19, and widely available at over 100 locations throughout Louisville," Fischer said. "This is an urgent step to halt this pandemic of the unvaccinated, and our community must once again work together so that we can we move forward — not backward — against this dastardly virus."

Fischer also urged other Louisville employers to recommend masking to slow the spread of COVID-19 and protect people who cannot be vaccinated, like children returning to class in the next month.

Louisville has recorded 84,747 confirmed COVID-19 cases and 1,333 deaths since the pandemic started. To date, 47.2% of Louisville residents are fully vaccinated and 55.5% of residents have received at least one shot.

"I am vaccinated and I encourage everyone who it is right for to get vaccinated as well. With that said, put this order in the column of “I will not comply,'" Piagentini tweeted. "We have completely lost perspective on the limited reasons we should infringe on freedoms."

Metro Council President David James, however, is quoted in the mayor's press release.

"We need to do what we can to protect our Metro staff and citizens while they access government in our Metro buildings," James said. "Fighting the speed of COVID-19 saves lives and keeps people healthy. Please get vaccinated."

And District 8 Councilmember Cassie Chambers Armstrong also objecting to Piagentini's message on Twitter -- and later in a conversation with WHAS 11.

"Especially as elected officials, we have an obligation to follow our public health leaders," Chambers Armstrong said.

Piagentini writing on Twitter, "We have completely lost perspective on the limited reasons we should infringe on freedoms."

He believes those exceptions are slim, such as overwhelmed healthcare systems like we saw last year.

"Until there is some evidence that we are close to that or on that trajectory, the executive branch doesn't have that power or authority," Piagentini told WHAS 11 in an interview.

Minutes later, there were dozens of replies -- some in support, while many others expressing frustration and concern with his Tweet.

"As elected leaders, we have an obligation when we see information that's concerning or incorrect to say something about it," Chambers Armstrong said.

Chambers Armstrong pointed to the risk in this, saying many city workers have kids who are too young to be vaccinated -- potentially risking spreading the virus to them.

"He can try to change the policy or try to change the guidance, but whenever that's what the current state of the science is -- as an elected leader he shouldn't just say 'I'm not going to comply with that' or 'I'm going to ignore that.' That's bad leadership," Chambers Armstrong said.

Regardless, security guards prepped the entrance -- inside and out -- to be ready for Monday.

Familiar signs brought back out and put back on doors, reading: "Masks required for entry."

As far as enforcement, Mayor Fischer's office says visitors who don't wear a mask will not be allowed in. We're told violations from employees, including councilmembers, will be handled based on Metro Personnel Policy.

But we weren't told whether this would include disciplinary action.

Just two days ago, Gov. Andy Beshear announced all state employees and visitors must wear a mask inside state buildings.

RELATED: CDC document warns delta variant appears to be as contagious as chickenpox