"This one friend of mine who's since passed away was a big fan of his, so every time I see this mural, I think of him." 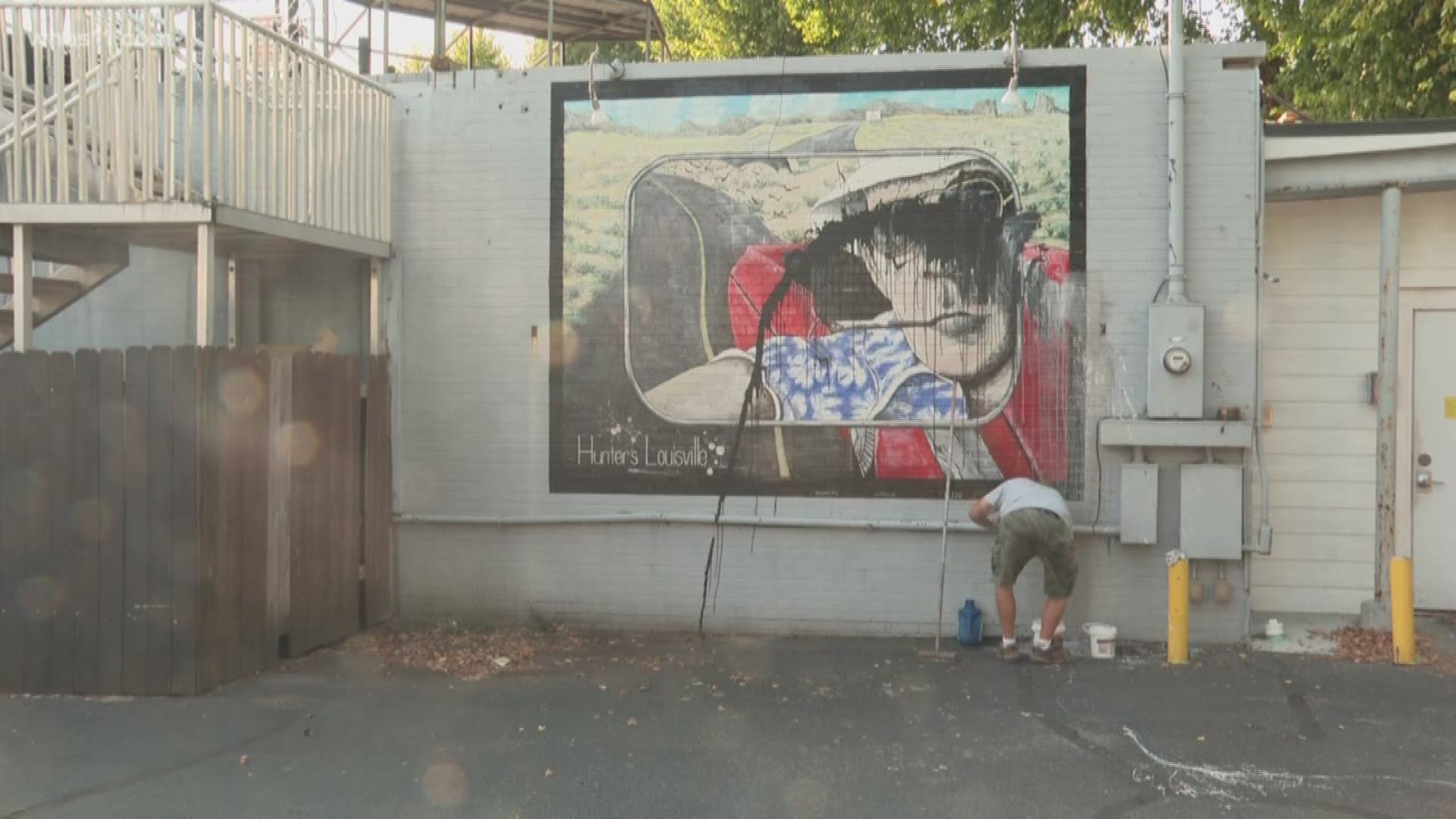 LOUISVILLE, Ky. — It may be a record-setting hot autumn day, but Ralph Weible is outside working up a sweat.

"I was kind of hoping it'd be a little bit cooler but the heat doesn't bother me none," he said.

The Louisville man has held many jobs, including a school bus driver and a mechanic.

"A long time ago, I did car stereo installations," he said. "There's really not much call for that anymore."

But Weible has traded his wrenches and pliers for brushes and rags. Tuesday afternoon, Weible worked outside V-Grits restaurant in the Highlands cleaning up the mural of Hunter S. Thompson.

"This one friend of mine who's since passed away was a big fan of his, so every time I see this mural, I think of him," he said.

Earlier in the week, a vandal splashed black paint on the mural of the famous Louisville author. Becky Steele, one of the co-owners of False Idol Independent Brewers, which occupies the same space as V-Grits, said her heart sank when she saw the vandalism.

Credit: Dennis Ting/WHAS-TV
The Hunter S. Thompson mural restored after it was vandalized.

According to Steele, surveillance video caught an unidentified person walking along the wall and then throwing the paint on the mural. Steele said she does not recognize the person and that the vandal's face was covered up.

Steele said one of their clients contacted the Highland Commerce Guild, which V-Grits and False Idol Independent Brewers have just recently joined. The Guild then contacted Weible, who came out to salvage the mural.

Weible said he started cleaning paint throughout the Highlands 10 years earlier after Mark Abrams, the treasurer and head of graffiti abatement for the Highland Commerce Guild, asked him to help.

"This was kind of a learn on the job kind of thing," Weible said.

Weible said this has now become his full-time job. He estimates that he has cleaned more than 10,000 cases of graffiti and vandalism in the past decade.

"What I do on a daily basis is patrol up and down Bardstown Road, Frankfort Avenue, some of the alleys and I'll hit what I see," he said.

For Weible, he said the main reason he continues to clean graffiti and vandalism is for one main reason: neighborhood pride.

"I have a soft spot for the Highlands," he said. "My great-grandparents lived here. My grandmother grew up here. So I want to keep it nice."

Weible said he also cleaned the Old Cardinal Stadium seats that were vandalized earlier this week.

Anyone looking for more information of the Highland Commerce Guild can visit their website here: https://highlandcommerceguild.org