'We just want to be safe, we want to be warm': Homeless look for shelter during Louisville winter storm

While some shelters have bed available as Louisville Metro activates Operation White Flag, advocates say the problem is some do not want to go to shelters. 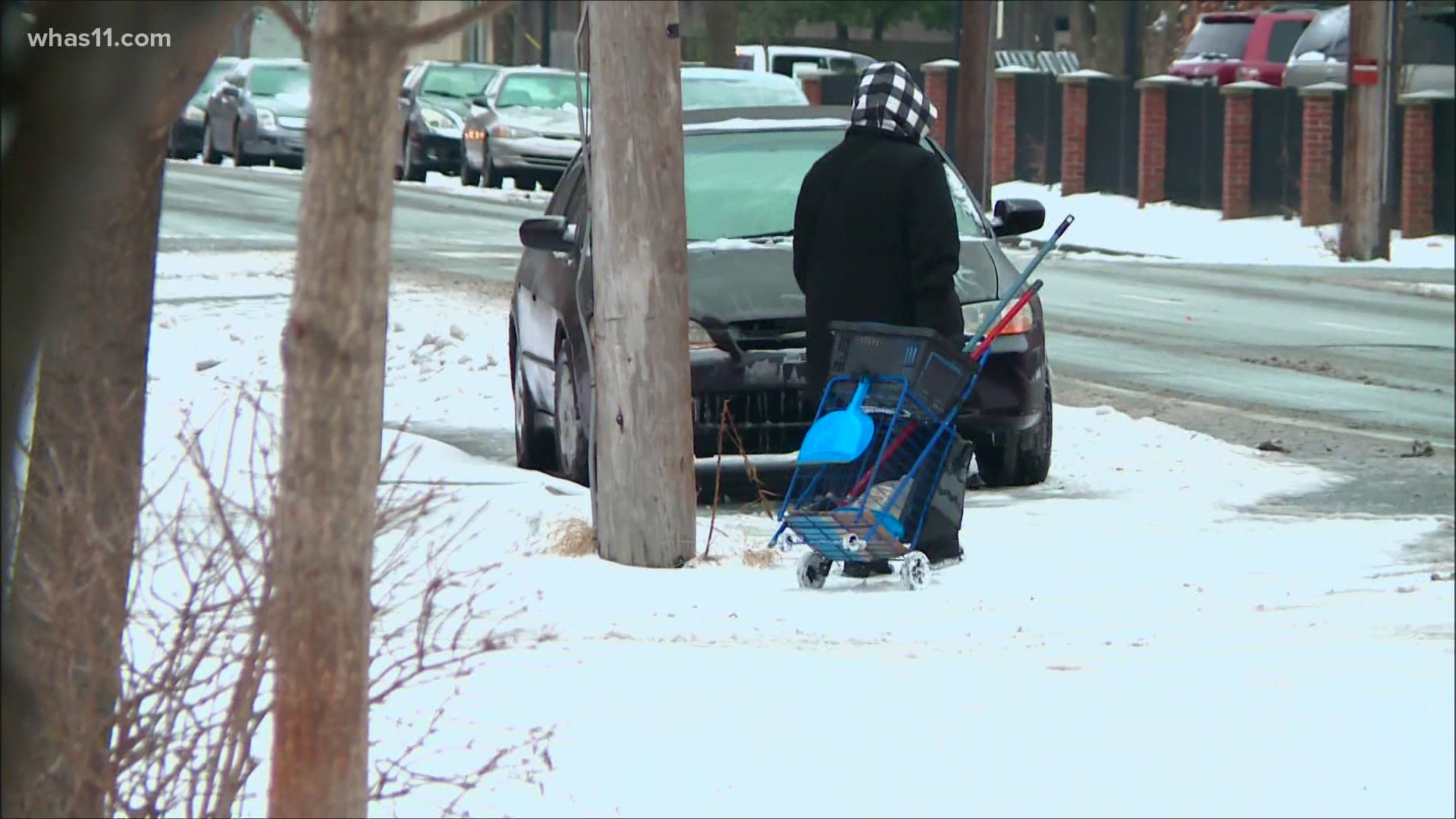 LOUISVILLE, Ky. — Homeless outreach groups were hustling to find people places to stay Monday as dozens of homeless folks crowded on the corner of Jackson Street and Jefferson Street.

Gill gave Lamondre Harbison and his pregnant partner a ride to a hotel Monday afternoon. Harbison said he’s been homeless for about a year.

He said he’s worked as a chef at several area restaurants, and also in construction.

“You can look at my work history, and then COVID hits, can't get a job, nothing,” he said.

Harbison said he's even put a deposit down on rapid housing unit, but has already waited a week for Section-8 officials to inspect the place before he can move in.

Many homeless folks are resting their heads across the street from Wayside Christian Mission, a shelter built specifically for the homeless. According to their website, there are more than 50 beds available as Louisville Metro activates Operation White Flag.

Gill said the problem is, people don’t want to go there.

“Why are folks choosing to sleep on the concrete in very freezing cold temperatures as opposed to going inside these facilities? Lack of safety, lack of security, lack of respect,” Gill said.

Gill said if someone wants to stay with a partner or has a dog, they cannot stay at some shelters, as well as many other issues.

Nina Moseley with Wayside Christian Mission sent WHAS11 this statement on Monday, when asked about people not feeling comfortable in the shelters:

“We understand that some folks suffer from severe mental illness and have difficulty with crowded spaces. However, our shelter has been specifically designed for the homeless from the ground up. Our staff and professional case managers are trained to work with special populations, such as the mentally ill, and trained to help ease their anxiety. The shelter is equipped with many cameras and guards to ensure safety for our clients from theft and violence. As with any shelter, there are basic rules needed to ensure safety, but many other rules are relaxed during White Flag.

Rules remaining in place are those directly tied to the safety and well- being of our guests and facilities. For example, no drugs, alcohol, or smoking is allowed inside the building. Also, because of COVID, we require social distancing and masks.

One of our concerns about isolating a person who is mentally ill in a hotel room is the inability to monitor them for any harmful behavior to self.”

“What I would propose is more scattered, smaller shelters that can provide more intimate support,” Gill said.

Gill, along with other outreach groups, continue to ask people to donate supplies and space to help keep people alive this week.

The Low Barrier Shelter opened to address four scenarios that people sometimes quote as a reason for staying outside.

1) We accept people with their pets.

2) We accept couples and allow them to stay together.

3) We accept people who may be intoxicated or under the influence of drugs....they just can't use inside our premises.

4) We accept persons who have been banned previously for behavioral issues. (If their ban was due to extreme violence toward another guest or a staff person, we may transport to another shelter. However, during White Flag weather, we make every effort to not turn people away from our doors).

If the public sees people trying to sleep outdoors and they are agreeable to coming inside, please call 502-996-1888 for transportation to a shelter. We do not want any of our citizens to freeze to death during this severe weather.